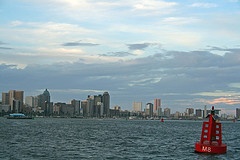 These next couple of posts are from last week, but I did not have internet access so bear with me on the lag. Thanks.

I was going to wait until there was another step in the matter that I am dealing with, but so far it has been adjourned three times so I am not optimistic that it will happen any time soon and want to get these thoughts down while they are fresh.

TP assigned me my first case. It was a double rape, which in SA has a minimum sentence of life. He handed me a file with transcripts in it and it was my responsibility to read through and find loopholes, inconsistencies, and areas of possible appeal. The transcripts are terrible. They are apparently taken by a machine that records the sound and then someone transcribes them. However, between the bad acoustics, the language barrier of having everything done through a translator and I’m not sure what else, half of what is written in the transcripts is [inaudible]. I found this made it very difficult to figure out what everyone said was happening. However, what I could piece together showed glaring inconsistencies in the story told by the victim. You see, in this case the entire case was built around the comparative credibility of both witnesses. When I read the part of the court document titled “judgment” it listed the court’s opinion on the credibility of each witness and in the absence of eye-witness testimony and forensic evidence this is what the court made its decision on exclusively. I agreed with the judgment that the accused’s story and his answers did seem a little inconsistent, however, there were some serious inconsistencies that were glaring to me. Most notably, in her initial statement to the police, the complainant had said that she was only raped once and then in court said she was raped twice. This inconsistency would change the minimum sentence from something less than mandatory life to life. I wasn’t sure at first, but after I read it a couple times, I was convinced that this guy was getting screwed.

After this revelation, I brought this information to TP. The next day we went to prison to consult with the accused. That in itself was quite an experience. Susan and I went with TP and Tessa, a civil lawyer that Susan has been working with and who is awesome, by the way. We got into TP’s car and drove about 20 minutes outside of the city. It was the first time we got to see outside of the city center, which was kind of cool. We arrived at the prison and went through a series of gates. Security was different from what I had expected. There was an appointment for the car, which said “Legal Aid Board” on the side. Nobody asked who Susan and I were and all they did at each of 3 checkpoints was open the trunk of the car, look in briefly, and then close it again. No questions were asked and no identification was required. We then arrived at the appropriate cellblock. There were prisoners in orange jumpsuits walking out the door when we arrived. It was explained to us that the prisoners who did not have very long left on their sentence are allowed to go work on the grounds and play soccer and the like.

We waited at the door for a while for our respective clients- Susan’s is a bogus divorce situation and my rape convict. We had to wait a while as the guards paged them. They were in a particular cellblock for people who were awaiting trial. After chatting for a while they finally came outside the door to tell us that we could go in. We had to sign in but they didn’t take any ID, ask who we were, or ask any questions. They frisked TP but not Susan, Tessa or I, and only TP got a visitor badge. We had to walk through a couple gates, but even that was a minor obstacle. We sort of hovered around for a few minutes. Apparently the room where consultations usually occurred was occupied, and the chapel which was the alternative location was full of people praising Jesus to the voice of a man that sounded like an American southern preacher. We finally had to settle for talking through the bars of the prison as prisoners walked back and forth between two chambers.

My client stuck to his story. He was innocent. He did not rape her at all. He was not there that night. He pointed out all the inconsistencies in the testimony from what the police report said. And everything he said was accurate. TP explained that he was his new lawyer and that he would deal with the matter the best he could. The client thanked us. He kept looking at me and appealing to me. I tried to remain neutral and not show any emotion, but I honestly believed him. TP asked him for some of his background on what his life was like which would be used in sentencing, and then surprisingly TP looked over at me and asked me if there was any additional information I thought would be helpful. It was cool for me to feel like I had the credibility to give input. I had one additional question that I asked and TP seemed satisfied.

When we finished our consultation, we got in the car and drove home. TP took us the alternate route that skipped the highway and went by the shantytowns. We got to see the rows and neighborhoods of shacks built out of whatever people could find. We explained to TP that we don’t have that kind of poverty in this country. It was almost a surreal sight.

As long as you're not using names, and the details remain appropriately vague (rape case is pretty generic, no victim information, you've even been sufficiently vague regarding exactly what the contradictions were), I believe you're fine.  I enjoyed the post.