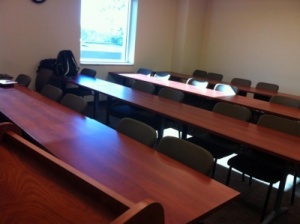 This is a topic I really focus on in my own blog but I feel like it is something that needs to be thrown out into the legal world over and over until someone changes it.

The loneliness of bar prep is enough to drive anyone crazy.

The following is an excerpt from an e-mail to a dear friend that I wrote during bar prep:

"I just want this nightmare to be over. I don't even care if I pass at this point. I just am tired of it all. It's lonely. It's frustrating. People make me mad for no reason. I've never felt so stupid...I'm sorry for ranting. Anytime someone talks to me is like a breath of fresh air. Reminds me that I haven't been completely forgotten about although there are times sitting there studying that you really begin to wonder."

For me it wasn't really the subject matter that I was working on or the endless amounts of multiple choice questions that I did that was the basis for my misery during bar prep. It was how alone I felt.

Day after day I would sit at Barry University studying. Students wandered around and teachers came in and out of the classroom I worked in. But it didn't matter.

I felt like I was drowning in my isolation.

The worst thing that happened and when I felt the most alone was when I went to class. Because I was a Course Administrator, I had to go to class. I didn't get the luxury of sitting at home or in Starbucks to study. At first, people would show up. But as time went on, either no one showed up or everyone would leave not even an hour into the lecture. I was left alone. I felt like the girl in Jurassic Park when she starts crying "He left us! He left us!" any time when someone would leave.  I even took a picture of the empty room that I attached here because I wanted to prove to my family how alone I really was.

Now that I'm on the other side, I hear from my friends all the time about how alone they feel. And to me, I find it astonding that so many of us feel the same way but no one wants to discuss it. It seems to be the unspoken horror of bar prep.

People act like talking about the loneliness is shameful. I had people tell me I was being dramatic or that I was imagining things. But it's not true.

I really felt like no one understood and I still believe that unless you go through bar prep, you really don't understand what it is like for us.

That's why I write. I write here and on my own blog just to show my friends and even total strangers that you aren't alone. I totally understand how it felt to not know what was going on or where the world was going. I want you to learn from my mistakes.

The ultimate question I've tried to examine is: how do you deal with the loneliness?

I became a huge fan of social media towards the middle to end of my bar prep. Everyone tells you that you don’t need distractions and they always list the first thing as Facebook. I broke the rules as I like to do. Almost daily I would go on Facebook and posted statuses about what I was feeling or what I was going through. It was amazing how supportive those on my Facebook became. Childhood friends and their parents as well as others wrote me replies, personal messages, and e-mails to show me that I wasn't alone. I needed them. They made me human again. I felt like I was more than a student in bar prep. I belonged.

Now, I have gotten my friends to log on to social media. I get messages at all hours of the day and night from them. And I always write them back within 24 hours because I remember how slowly the clock seems to move during bar prep. I know how much they need someone, ANYONE, to tell them that everything will be OK and that what they feel is normal. I tell them to write me anytime they need me, and they do. It makes me feel good to help and it makes them feel less alone.

I'm sure it can be a distraction for some but bar prep is all about discipline. Don't abuse social media. Use it sparingly.

Another tactic I used to defeat the loneliness was that I began to torture past bar takers. Almost everyone I reached out to was more than happy to help and excellent at talking me off of the proverbial ledge.  Your friends and family who have taken the bar exam understand how you feel.

Don't tell yourself you don't have the time. You do. An email takes less than five minutes to write but you can cherish the responses that they give you. Trust me, you have the time to write a simple email.

To tell people how you feel releases the power that that feeling has over you. And as the loneliness fades, the more you will be able to concentrate.

So how do you defeat loneliness? Talk to everyone and anyone, even your local barrista. Tell them how you feel and let them help. You'll feel better and your scores will reflect how you feel.

And if you ever need someone, please reach out to me. I answer emails and messages all the time.

You're not alone. Everything will be ok.

Absolutely true. I commend you for your honesty and encourage you to continue the good work talking about this. Not many people like to admit how the bar actually makes them feel.

I thought it would be a good idea to leave all the distractions at home so I flew out of state to stay with a friend and do bar review online. Now that I have a house to myself 12+ hours a day, I feel panicked and anxious. I’ve only been here since Saturday, but I don’t know if I will ever adjust to this. At this point, I wish I was at home and just left the house to study like everybody else does. Feeling very alone and anxious! It’s snowing outside and I don’t have a car to leave the house!