Am I wearing too many hats? Learning how to juggle it all: CHANGE. 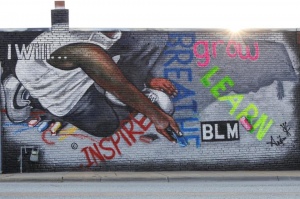 June 24, 2020 was my first day back in the courtroom since March 13, 2020. As I walked to the courthouse, I saw my client across the street as he yelled “Ms. Ellison, Ms. Ellison, wait up! Wait for me!” Honestly, I instantly felt apprehensive due to COVID-19. How will I greet him? Sometimes I start with a handshake or a fist bump, coupled with a smile. How will I tell him to stay six feet apart from me? Will he be offended? What are his thoughts about the pandemic? Is he taking it seriously? Yes, these are thoughts that ran through my head while waiting for the traffic light to turn red so that my client could meet me across the street. Let’s just say, the pandemic makes it difficult for me to be my authentic self and quite frankly it’s uncomfortable and annoying. I enjoy my clients and want to be able to interact with them freely and genuinely.

This change is small compared to the changes caused by the racism pandemic.

Employers and organizations are issuing statement against police brutality, racial injustice and the implementation of police reform. For some, the actions of the businesses will determinewhether they will gain, maintain or lose customers, supporters and/or employees. One statement issued, along with a few others resonated with me personally. On June 8, 2020, Mary Fox the Director for the Missouri Public Defender’s Office (MSPD)issued a press release that in part states:

“We condemn state sanctioned violence against the Black community and all communities of color. We believe, and always have believed, that Black Lives Matter. We have and will work tirelessly to have our client’s voices heard, valued, respected and believed in Missouri Courts. We commit to do more. We commit to listen to people of color and believe their experiences. We commit to teach and learn about how racism impacts our community, our courts, and our profession and to take action against it.”

My employer has created an atmosphere that welcomes tears, hurt, sadness and pain but more importantly encourages change by action. I recently attended a webinar on Diversion and Inclusion where a panel of speakers discussed their experience with diversion and inclusion or the lack thereof, and how to move forward. Recently, the training director of MSPD created a safe space for black and brown employees to support and encourage each other and to become involved in training and leadership positions. Furthermore, funding was obtained so that all black attorneys are able to join the Black Public Defenders Association (BPDA) and attend BPDA's Virtual Conference being held in July 2020. This is only a few things that MSPD has done in an effort to support its black employees.

I take comfort in working for an organization that condemnssystematic racism, and who stands with the Black Lives Matter movement. This comes as no surprise as, we, public defender’s,tirelessly fight on behalf of the oppressed every day. Every time we enter the courtroom we have the weight of the world on our shoulders as we fight against an unjust system. Rather it’s filing a suppression motion arguing why our client’s statements should be suppressed due to them not being afford their constitutional rights or making sure clients aren’t subject to unreasonable search and seizures by law enforcement – we are the voice, for the voiceless. We can only hope that one day, there is a true change, where everyone is treated equally.

Quotes like “Black Lives Matter”, “Make Racism Wrong Again”, “No Justice, No Peace” have become normalized. We are seeing protest calling for justice, police reform and standing against police brutality across the world. This sparked after the killing of George Floyd, an unarmed black man, who died on May 25, 2020 in Minneapolis, Minnesota, after a white police officer, knelt on his neck while he was handcuffed face down in the street. Some of the largest protest occurred in Washington, DC, Australia, Berlin, London, Paris, and Sydney. Lawmakers are making decisions on whether to remove confederate battle emblem that has long been associated with racism and oppression. Recently, a historic vote occurred when the House and the Senate passed a bill on June 21, 2020 to remove the Mississippi state flag that displayed the Confederate battle emblem. For many Mississippians, this was a declaration against white supremacy and a treacherous government. Removal of symbols that depict racism is definitely a step in the right direction to effect change.

How can you help make a difference? Get involved. Don’t be silent. Stand against racial injustice. Stand against police brutality. Confront your own bias, stereotypes and subconscious racism because true change happens when you are a “voice not an echo”.

There is a time for everything, and a season for every activity under the heavens - Ecclesiastes 3:1