Everything is Reproductive Justice—An Unbought and Unbossed RJ Advocate 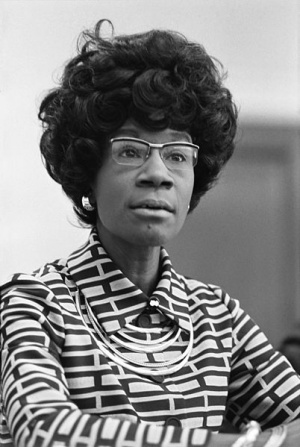 On the heels of Black History Month, the beginning of Women’s History Month, and amidst the presidential primaries, a spotlight on Shirley Chisholm seems apropos for an “Everything is Reproductive Justice” blog.

“That I am a national figure because I was the first person in 192 years to be at once a congressman, black, and a woman proves...that our society is not yet either just or free.”

16 Black women including retired, Shirley Chisholm got together in the summer of 1989 and signed “We Remember,” a brochure and first-of-its-kind collective statement supporting abortion access. The brochure offered a definition for “reproductive freedom,” including: the right to choose to have a child, the right to choose not to have a child, and the right to reproductive health and to make reproductive choices. In 1994, the same year of the coining of the term “reproductive justice,” the “We Remember” brochure was republished and included more signatures of Black women. The next year, Chisholm became a founding member of the African American Women for Reproductive Freedom.

In 1969, as a Congresswoman, she gave a statement about her views on abortion in front of the Republican Task Force on Earth Resources and Population. Her statement addressed maternal mortality and the economic plight of low income families unable to financially support their children. In her statement, Chisholm also emphasized her belief that abortion should be an individual choice not controlled by the state; this is a belief she later shares in her autobiography, Unbought and Unbossed.

1969 is also the year Chisholm became an honorary co-president of NARAL Pro-Choice America, then known as the National Association for the Repeal of Abortion Laws.

In addition to supporting abortion access through membership in organizations and speaking out, Chisholm's passion for the economic plight of her constituents led to a significant role in the passage of the Supplemental Nutrition Assistance Program (SNAP) legislation. Indeed, without access to food for oneself and those in one's care, a person cannot exercise their right to choose to have a child; therefore, Chisholm's work to address those in need of food is yet another contribution she made for reproductive justice.

Chisholm's life and career is a continuing inspiration for reproductive justice and since she is known for saying that she wanted to be remembered for having guts, she can best be honored by having the guts to speak out on diverse issues and seeking progressive change.