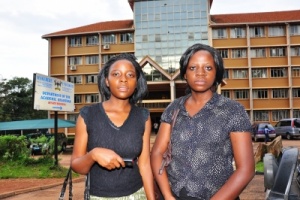 Ms. JD is pleased to announce the 2011 Ms. JD International Scholars: Gracious Atuhaire  and Mary Nakale!  Ms. JD launched its Global Education Fund last year to support women in third-world countries who dream of becoming lawyers but do not have the resources to pursue legal educations.  Thanks to your support, Ms. JD is able to partner again with the Gender Mainstreaming Division at Makerere University in Kampala, Uganda to make the educational dreams of our Scholars possible.

Ms. JD continues to support the studies of our 2010 Scholars, Joaninne Nanyange and Monica Athieno, who have returned to Makerere University for their second year of law school!  All International Scholars are chosen based on their educational achievements, financial need, and leadership potential.

Why Is It Important to Support Education for Women?

The World Bank notes that investment in education for girls has one of the highest rates of return to promote development.  In particular, educating women helps them earn higher wages and participate more in actively in the labor force and political sphere.  Providing education to women also has some less obvious benefits such as reducing child and maternal mortality, improving child nutrition and health, preventing the spread of HIV, and protecting girls from exploitation and abuse.

Over 45% of Ugandan women over the age of 25 have no schooling at all, and men are more than twice as likely as women in Uganda to have access to higher education.  To put those numbers in context, over 99% of women over the age of 25 in the U.S. have had at least some schooling, and men are less than 1% more likely than women to have access to higher education.

In 2006, the Ugandan government and the Lord’s Resistance Army (LRA) reached a Cessation of Hostilities agreement that mostly ended a bloody civil war that ravaged Uganda for decades. Known as Africa’s longest war, the violence led to thousands of deaths, tens of thousands of children abducted and made into child soldiers or sex slaves, and millions displaced from their homes.  Uganda is working to sustain its newfound stability and looking toward the future.  Despite recent gains, more than 37% of the population in Uganda still lives below the national poverty line, and life expectancy for women is only 52.4 years.  Education is a critical tool to enable citizens of Uganda to build a better tomorrow for themselves and their children.

Consider making a tax-deductible donation to Ms. JD today to support the Global Education Fund and our other programs!