Everything is Reproductive Justice—Bail Bonds: Sometimes cash isn’t the problem 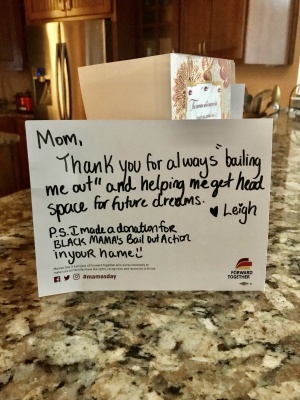 The awareness of the systemic destruction caused by the money bail system has grown alongside bail reform efforts and increased media coverage. Indeed, many may recall the story of a woman in Texas who admittedly took $1.00 (be sure to read that as "one dollar") and was charged with felony robbery. A judge set her bail at $12,000 and the woman was unable to post bail. There are more stories across the nation, like those of half the women in a Massachusetts jail who are stuck in jail because they cannot post a fifty dollar cash bail. Shedding light on the stories of Black mothers, in 2017, National Bail Out began organizing #FreeBlackMamas, a yearly awareness campaign about the effects of cash bail. National Bail Out also organized bail outs across the nation known as #BlackMamasBailOuts on Mother’s Day.

Sometimes cash isn’t the problem, or rather the only barrier keeping people behind bars with pending criminal charges.

Cash or money bails require the person posting the bond to submit all cash. For example, in the state of Georgia, where I have recently begun practicing criminal defense again, a judge may grant a cash only bond for a misdemeanor charge at $750. This means $750 must be relinquished for the inmate to be released from jail pending the resolution of their charges. A lot of people who encounter the prison industrial complex do not have access to $750; so with or without the help of legal counsel, an inmate may ask a judge to increase their bond to $1,050 because bonding companies, particularly in Georgia, will allow a bond co-signer to post a percentage of a bond that is at least $1,000. Arguing to raise a bond may seem counterintuitive at first but as an example, a bonding agency in Georgia will allow a person to post 10-15% of a $1,050 bond or approximately $150 -- far less than a $750 cash only bond.

Additional requirements or barriers to posting bond may depend on the facts associated with the alleged facts and charges. For example, a person with a criminal record may not meet the requirements of a bonding agency or it may not be in their best interest if they are still on probation for past charges to post bond for someone else facing charges. Finally, imagine the difficulty for an immigrant or non-citizen searching for a person who has proof of state residency and a driver’s license that is also willing to co-sign on their bond. All of these barriers create an unsurmountable feat for a lot of inmates, including mothers and fathers who want to get back to their children, to their jobs, and to resources that could help them defeat their charges.

Everything is Reproductive Justice

All of the barriers created by the money bail system undermine the pursuits for reproductive justice. Reproductive justice includes bodily autonomy and the right to have children, not have children, and parent children in safe communities. Due to its design, pretrial detention prevents a person from exercising autonomy over their body and parenting. Moreover, while imprisonment in jail or prison may disproportionately affect men and especially Black men, it is usually Black women and low-income women who are coming up with the cash and co-signing bonds. Joshua Page's of the Appeal, describes the burden succinctly:

"Women are expected to care for the young, sick, old, and, yes, the incarcerated."

This mountainous burden on women to come up with cash for a bond often means deciding between a bill and bond. The financial ramifications undoubtedly affect their ability to provide a safe and healthy environment for any children they may have in their care.

One more time -- sometimes cash isn't the only problem. If a woman also has to co-sign a bond, the bonding agency will place additional requirements (read burdens) on the woman, including relinquishing their privacy and subjecting their home and or vehicles to searches by the bonding agency. In many ways, by posting a bond, a woman who is not behind bars ends up experiencing many of the constraints of the accused individual they helped bail out.