The Best Advice I Never Got: Connecting 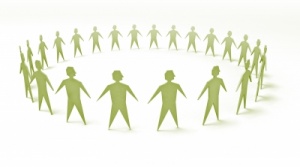 Editor's Note: this essay was submitted by Julia, in response to the 2010 Ms. JD Scholarship prompt: What's the best advice you never got?

Many businesses do not block Facebook on their desktop computers. This seems counterintuitive, since news outlets never stop telling us about the evils of social networking and the constant threat of the internet exposing employees’ unprofessional conduct.  Savvy businesses realize, however, that sites like Facebook and Twitter are neutral tools. An employee’s use of her Facebook page is as professional or unprofessional as she makes it; for every scandal in which a person is fired for posting negative comments about her boss, a dozen other employees get back in touch with old friends and colleagues, discover new projects and proposals for conferences, ask for help finding a consultant, organize a lunch date for new interns. These employees use their social talents and their friendships to create new and enriching experiences.

This is the piece of advice I wish I’d had. You have a network, whether or not you believe you do. Consult your network, and ask for help.

When I first began to look for work in the midst of a global financial crisis, I observed the successes of my peers with dismay. They all seemed to have connections of some kind – a parent who was a partner at a firm, a mentor who had connections on the Hill, a neighbor who could create an internship position in his business. What about me? I thought. What about those of us who aren’t connected already? How was I supposed to find my “in”?

The first tip I would give to my past self is: you ARE connected already. You DO have “ins.” Networking is usually not a one-step process; you’ll rarely find someone who is prepared to find you a job directly. Usually, you’ll meet someone whose work friend has a boss who is looking for an intern, or something along those lines. There are multiple degrees of separation between you and the person who is going to hire you, so just because you don’t know anyone who has hiring authority, you are not excluded from the network. You have employed friends. They are part of your network. You have former employers or teachers; they’re part of your network, too. You have Facebook – everyone you are connected to through social media networks are also part of your network, and almost all of them want to help. If you could introduce your friend to your coworker’s supervisor, you would do it in a second. Your friends – even your Facebook friends – would, too.

The second tip I would give my past self is: don’t be embarrassed that you need to ask. I was an English major in college, and when I emerged into the workplace I took with me the idea that an American success story involves a self-made man who never asks for help. I thought I needed to be Jay Gatsby, forming my own connections and creating myself out of ambition and perseverance. But I forgot that Gatsby is a story of failure and not success; that he ends up shot dead in a pool while Daisy Buchanan goes back to her husband. Obviously, I don’t mean to say that setting out alone will literally kill you. My point is that the story of the self-made man is a romanticized myth, and it should never constrain your networking instincts. Don’t be misled by the idea that asking your friends and social networks for advice is cheating, or a symbol of your inability to succeed. It’s just the opposite: it’s the necessary first step in building your career, and it’s an important skill to develop. Furthermore, it shows your network that you are amenable to sharing ideas and advice, so when a friend-of-a-friend needs some help, she’ll feel comfortable coming to you. So, use Facebook. Ask that network to help you. You’ll be delighted at the number and variety of responses you’ll get.

The final tip I would give my past self is: have conversations and meetings even when the people you’re meeting with are not looking to hire. Accept Facebook friend requests from people who are interns now, and have no hiring authority. If you establish these friendships and professional acquaintances now, networking is only going to become easier in the future. People you meet at conferences will think of you later when they hear about new opportunities that align with your interests. Swap places with these people for a moment – if you heard about a job that sounds perfect for that friendly woman you met at a conference last month, you would get in touch with her, too. I don’t mean to imply that you should try to make strategic friendships, or position yourself socially so as to maximize advantageous networking opportunities. I just mean that it’s never counterproductive to make new friends and forge new alliances, even in the middle of a job search.  In the best case, you’ll meet a lifelong friend who will introduce you to the boss of your dreams. In the worst case, you’ll have another ally in the great battle for professional success. Sometimes, the most successful meeting does not end in a job offer, but in a renewed sense of confidence - in the conviction that you are valuable, worth befriending, and not alone.

So use Facebook. Or if (like me) you are too suspicious of Facebook’s privacy policies, use Twitter or LinkedIn or Goodreads. Ask the people who enjoy communicating with you for help, and offer to help in return. And be proud of the wide, diverse, accomplished network that you have already built.