Best Friends at the Bar: Historical Perspectives About Women in the Law 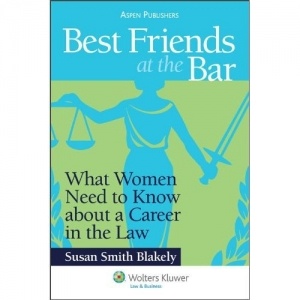 Editor's Note: This post originally appeared on the Best Friends at the Bar blog on September 29, 2011.

I know, I know.  You young women do not like to hear us “older women” dwell on the hardships of life “in the day”.  That seems to be particularly true of young women lawyers, and I think some of that attitude may result from the fact that “seasoned” women lawyers can get preachy and judgmental when delivering the message.  That is their bad, and they should temper their presentation if they want to be heard.

However, you should not disregard the message just because you do not favor the messenger.  There is a lot to learn from these stories and these pioneers.

Here is an article that I recommend to you.  See the September 12, 2011 edition of www.therecorder.com.  The article profiles women lawyers who have been blazing the trail for more than 35 years as practicing lawyers, law school professors and adjudicators.  Maybe I found it fascinating because many of these women are my contemporaries or because at least one of my favorite professors in law school was mentioned in the article.

But I think it goes beyond that.  It demonstrates a commitment to women’s issues and a resolve that is hardly recognizable today, mostly because so much that these women were fighting for has been accomplished.  We take too much of that for granted, and some times we just have to be reminded how far we have come.

Do not be put off by the fact that the women in this article are all from the San Francisco Bay Area.  The Recorder is a Bay Area publication, and activity in the local legal community was among the criteria for selection.  Although I recognize, as did the publication, that there are many other trailblazing women lawyer contributors around the country, I think that this group is fairly representative because much of the anti-discrimination efforts on behalf of women started at law schools like UC Berkeley and Stanford and spread throughout the country from there.  What appears to be a geographic limitation should not be a bar to you enjoying and learning from this article.

You will read about giants in the profession, like Barbara Babcock and Herma Hill Kay, who opened the doors for all the rest of us.  It is always amazing for me to read these stories because, without them, I might think that it all started with my generation of women lawyers, who faced significant enough resistance in their own right.

However, it clearly started long before that, and these stories are both humbling and amazing.  The accounts of women who refused to be denied are really stories of creative and entrepreneurial spirits, and we can learn a lot that still is applicable to our lives as women lawyers today.

So, open your minds and give it a read during your precious down time from lawyering or over the holiday break from law school.  I think that  you will be glad that you did.