By jessie kornberg • November 13, 2007•Sexism, Sexual Harassment, and Other Forms of Discrimination 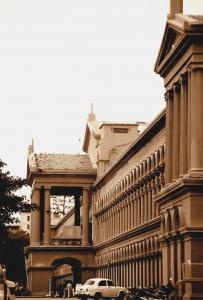 I can't stop thinking about a recent story out of a Texas district court of several alleged acts of extremly severe sexual harrassment by a federal judge. There are a number of disturbing circumstances involved. The alleged aggressor is a federal judge-a person we all trust to uphold the law. The alleged attack was barbaric and, according to more than one accuser, just the most recent and sever in a long history of abuse of female subordinates.

I'm clerking this year, so the intimate setting in which these attacks purportudely took place is familiar to me, and it's a particularly difficult environment in which to combat this kind of aggression. I know I look to my judge as a mentor. Imagining a person in that position abusing my trust and exploiting my dependence and vulnerability is heartbreaking. Fortunately, the victim in this case had family and professional support and was able to come forward with her story, but I think that represents the exception not the norm.

Recently, two friends have also been the victims of sexual harassment in similar mentorship relationships. Both of these women are smart, talented, and confident. They are poster-children for the success of the women’s movement: attaining higher education degrees in the hard sciences – succeeding in fields once dominated by men. They’ve been in competition with men in classrooms and stuck up for themselves and their points of view. I’m not sure what qualifies a person to deal with harassment effectively, but I expect these women are as likely as anyone to fit the bill. And yet neither confronted their harassers and really stuck up for themselves in the moment of the attack. Totally humiliated, both women just responded to the harassment by compromising their own professional options in favor of avoiding their aggressors.

I don’t blame them. I’ve worked on sexual harassment suits. It didn’t take long for me to learn that the options for the victims of this kind of harassment are limited and unappealing. As one of these two friends said to me when talking about why she doesn’t want to pursue administrative or legal action, “it only leads to negative attention.”

There are so many conversations that need to take place at this point: fundamental societal change will be needed to prevent this kind of behavior, a serious collective action problem must be overcome to respond to the behavior, the law and its enforcers must do more to protect against retaliation. In the meantime, I feel like sexual harassment is an inevitable part of almost any woman’s future. I wish I could guarantee that I’ll be more resolute if I face a similar situation. I think awareness and sensitivity to the problem is a beginning. I wish my preparedness hadn’t come at the expense of my friends’ and this Texas woman's well-being.

In May, Judge Samuel Kent pled guilty to lying to federal investigators during their proceedings against him.
Now the U.S. House of Representatives has impeached Judge Kent of four grounds, moving his impeachment trial to the Senate.

Jessie, were your friends sexually harassed in a blatant way?  In the past, I’ve questioned if comments co-workers or supervisers have made to me were borderline, but I chose not to say anything because it would be horrible to be wrong about something like that.  I think a lot of harassment, especially these days, is in a context where you feel really uncomfortable but don’t know if you’re being too sensitive.  I guess I just wondered if your friends’ examples were of this more subversive type or were clearly over the line since I think the potential response is different depending on which case it is.

I totally know what you mean. During my employment law class in law school we spent a lot of time reading cases in which "friendly banter" of a sexual or derogatory nature was deemed unharrassing. I was never quite comfortable with the reasoning there, but I also understand that labeling every uncomfortable situation harrassment isn’t necessarily the answer either.
That said, that was not the situation for either of my friends. One was assaulted, the other propositioned. Both very clearly over anyone’s line I think.

I think part of the problem is that many "mentors" do successfully date or marry former students, etc. Since at least some men have success propositioning women in subordinate positions, it creates an environment where it’s not viewed as abnormal. I think since fewer women date/marry men who are significantly junior to themselves, the same issue doesn’t come up with women mentors/male subordinates, but it would be interesting to see if that changes as women (hopefully) become equally powerful/plentiful in the workforce. Assault, of course, is a completely different story.