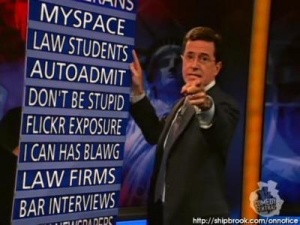 This is nothing new, but there have been several stories out there about the real life consequences of law students’ online life. There is one in the New York Lawyer, the WSJ Law Blog, and Jill Filipovic has discussed the AutoAdmit scandal here, here and here on Feministe. The upshot of all of this is that (1) employers are online, (2) they’re readin stuff, and (3) it matters.

The New York Lawyer piece is very detached, taking the non-controversial position that is basically assumption of the risk:

“Certainly, what a law student puts on the Web on his or her own volition is fair game. Firms should always be free to hire and fire candidates who are unable to manage their professional reputations by irresponsibly posting indefensible rants, sordid details about personal matters and inappropriate photos. However, recruiters must keep in mind that not all information about a prospective hire on the Web was put there by that person or even with his or her knowledge or permission.”

And that seems pretty non-controversial: what you do, you’re responsible for. But what about things you don’t do, but facilitate (or, if you prefer, aid and abet)? The example of AutoAdmit, which has now resulted in Anthony Ciolli, a Penn Law student who had been its “Chief Education Director,” seeing his firm offer rescinded as a result of the Board. As detailed by the WSJ law blog:

"On April 11, just over a month after the WaPo story ran, [Charles] DeWitt [managing partner at Edwards Angell’s Boston office] sent a letter to Ciolli stating that the firm had recently learned of the controversy involving AutoAdmit, in particular its “off-topic” message board, and that “the information we now have raises serious concerns about your joining our firm.”

"DeWitt wrote that the content of the messages on the board are “antithetical” to the values of the firm and the “principles of collegiality and respect that members of the legal profession should observe in their dealings with other lawyers.” DeWitt pointed out that in an online letter to another blogger, Ciolli and his partner Jarret Cohen identified themselves as AutoAdmit’s administrators and defended its “free, uninhibited exchange of ideas.”

"DeWitt continued: “We expect any lawyer affiliated with our firm, when presented with the kind of language exhibited on the message board, to reject it and to disavow any affiliation with it. You, instead, facilitated the expression and publication of such language. . . . ” He wrote, his resignation from the site was “too late to ameliorate our concerns.”

Maybe it’s all the studying I’ve been doing, but ideas like “vicarious liability” and “respondeat superior” are coming to mind when I read this. But is Ciolli being punished fairly? Jill, a target of some of AutoAdmit’s more vicious posts (see here), doesn’t think so:

It’s a good post. Like I told the WSJ reporter, Ciolli losing his job offer doesn’t make me feel any better, and it doesn’t make me feel vindicated in any way. That said, I can understand why a firm would have serious concerns about hiring him. The fact that he and his partner, Jarret Cohen, allowed all kinds of disgusting commentary to remain up on the board doesn’t speak particularly well to character and fitness issues. I think that Ciolli made a series of very, very poor choices when he was running AutoAdmit. I do feel genuinely bad for him, though, to have lost his job right before graduation. Any way you slice it, that sucks.

Jill goes further to discuss her own online exposure in light of this turn of events:

When it comes to internet-land, we all make choices. I’ve made a choice similar to Anthony’s — to co-run a website, and to do so under my full, real name. I’ve done that knowing that there will most certainly be consequences to that decision. There already have been. There have also been wonderful benefits, and so I’ve made the conscious choice to keep doing what I’m doing. But I’ve tried to do it as responsibly as I can, and the Feministe bloggers have collectively instituted a moderation policy that takes out any threatening comments — as well as comments that are racist, sexist, anti-Semitic, etc. I would not hesitate to delete a comment that released someone’s personal information, or that defamed them, or that harassed or threatened them.

And it’s clear there are arguments on both sides of an issue like this: should we punish the person who abets nastiness online? How much should you trust what you read about someone online? What long-term consequences should flow from online activities: should you answer for them in an interview? During your bar fitness interview?

A throw-away point that everyone seems to raise but not really answer (or at least in a satisfactory way) is the professional responsibility angle. Maybe it’s just that I took that class this semester, but I think there is a real Catch-22 there. While many of us might agree that some activities—like fostering sexist, racist, and violent talk, or posting pictures of yourself doing something late one Saturday night—shows poor judgment and character, we might also worry about the censorship alternatives. Hello, First Amendment issue-spotter. Further, I also have concern about someone (like employers or the bar) making calls about what is or is not acceptable. There are, as ever, some clear cases, but I also have slippery slope concerns. Especially since it’s a sort of soft, subjective judgment call—for example, does swearing online not matter, or show immaturity or crudeness?

All that I can say for now is that it is clear that these decisions are being made and judgment are being passed. Ergo, it seems there might also be a duty to warn: if some topics are considered no-gos, say so.

Otherwise, follow the wise words of an friend: don’t be stupid.

Great post!
As a big fan of the Colbert Report, I love the placeholder picture you've used.  Is that an actual screen shot from a recent episode (I've missed the show a lot lately)?  Did this whole 'scandal' make his "List"?
I agree with you about the 1st amendment concerns that are attached to alternative solutions to the problem.
It is very frustrating for me each time the 1st amendment comes up in situations like this or the Don Imus scandal of a few weeks ago.  The first amendment protects us from government interference with our right to free speech.  It doesn't protect you in the private sector (or other areas like school).  You can, of course, lose your job or your sponsors for something you say.  This is still a free-market economy and businesses are able to make business decisions when they are affected by their employees' stupidity.  (I know you must know this, I am just really tired of everyone screeming about 1st amendment rights when it comes to losers getting fired.)
What would be really troublesome (to me) is government censorship of sites like AutoAdmit (or Ms. JD for that matter) or laws that regulate how much news and commentators can talk about competing political campaigns or issues.

<div align=“left”>Sadly, this did not make the wonderful Colbert Report, but is from a You're on Notice generator.  </div>