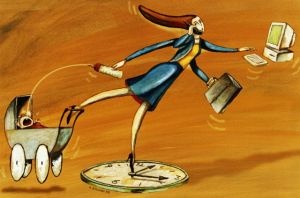 I want to take a minute to go against the grain and ask the seemingly counter-intuitive question about women in the profession: Could Big Law be the best place for us to practice law?

I was asked by a new acquaintance last week if I thought I could handle the "negative work environment" of the big firm. My response was that I think I actually prefer a negative work environment. More about that perhaps-unusual answer in a future post. For now, I'd like to explore why I think that big organizations are better for women. The idea for this blog was the new forum post here by a woman who has suffered gender discrimination in the setting of a small firm.

Big organizations (read law firms) may actually be better workplaces for women. With a big firm structure comes relevant company policies on things like discrimination, EEO, sexual harassment, maternity leave, etc. Also big firms come with Human Resources departments that may give some teeth and some human pulse to these policies. Big firms have large and imposing corporate liability policies that come with big premiums. Big firms come with big clients that have expectations about diversity and reputation. Speaking of reputations, big firms are very protective of theirs. It is one thing to work your associates like dogs because that is seen as favorable in some circles. It is quite another thing to have a reputation for gender discrimination or sexual assault in the workplace. In all, the size and formal structure of a big organization may provide some protections for women.

I think, however, that the most important thing that makes big organizations desirable is the human factor, the behavior of the employees when they are members of a large organization. Think about it. We all know that people do things within the privacy of their own home and in front of their own families that they would never do in public. For some this is something silly and harmless like walking around in your underpants. For some it is serious and really deviant like beating up on your spouse. For some it is the free wheeling of racial, ethnic and religious prejudices. In any case, these are things that don't leave the house. You always see these people fully clothed and NOT beating up on their co-workers.

The larger the company the less it is like family. The more co-workers you have, the less control you have over the environment and the less influence you have over the office norms and expectations. The smaller the company, the more it starts to feel like family, especially for those that have been there a long time. Obviously, the boss in a small company will still display restraint and keep his clothes on but he might be less worried about showing other ugly aspects of himself if he feels like he is among family like, his stereotypes, prejudices, and preference for dirty sex jokes.

I, personally, prefer large organizations and I know that clearly based on my experiences. I came to this realization after some personal reflection on why I was so turned off by the gendered environment in the small company. I had to ask myself why I reluctantly took a lot of harassment without saying anything. In the end I realized that I viewed the office as "his family" and didn't want to rock the boat or make things uncomfortable for others, never mind that I was uncomfortable.

However, I have to admit that the large organizations that I have been associated with have been those with strong, moral, and influential group norms that influence the group in positive and not negative ways. Again, I think that some of this is through the necessities of being large in size. Even if the company started off small and with screwed up employee dynamics, more people and more market exposure should change things for the good.

Also, I come to this analysis with a recognition that people have prejudices and carry around the burden of stereotypes. There are people at work that don't think women are valuable to the organization and think that a woman will never be as good an attorney as a man. I don't like that fact and think that anything we can do to change that is energy well spent. Nevertheless, they exist and I just want to keep them from impacting me and my work environment. Finally, I am no sociologist. I've based this on my own experiences. Positive, encouraging, and empowering on the large company side and uncomfortable, limiting, and discrimination-laden on the small company side.

(I'm no big firm recruiter! Like my husband says, "I'm just a squirrel, trying to get a nut.")

Is the choice really limited to big firm versus small firm?  I have worked at big firms, small firms (before law school) as well as non-profit, public interest firms (both before law school and ever since)—and have to say I think the best place to learn to be a lawyer and to really get experience practicing law while also being part of a dedicated team of individuals is at the public interest non-profit firms.  I think with all of the above choices, there are places where one may experience harassment or have better/worse personnel policies.  And, I think it is important to really figure out the reputation of any place that you go to work before taking a position at that organization.  But, I don't think the driving factor on where to work should be who has the best personnel policies— but rather, where will you learn to be a lawyer and get the kind of experience and be involved of in the types of projects that you set out to do back in those early days of applying to law school.  And, for me at least, if that is the most important factor of the equation, the only place to work is a public interest organization.  The attorneys I know at public interest jobs learn to be a lawyer right out of the gate, because they are getting to practice and be in control of projects from the get go.  In my earliest years as a lawyer, I was arguing in court, taking depositions, testifying before the legislature, leading statewide workgroups, and serving as lead on attorney on cases.  But, even as I was taking leadership on my projects, I also had the support I needed from the other attorneys working at the organization or on the case to provide mentorship and to help me strategize on the best way to proceed.  And, the work at public interest firms is far more interesting because the subject matter is of your own choosing.   I feel like too often the debate over where to practice law is too limited—big firms vs. small firms - and there really is another way.  The hours are just as tough, the pay is dismal, but the experience, mentorship and personal satisfaction in the work cannot be beat.

While I've framed this post as being about biglaw, you are absoolutely right that big law firms and small law firms are not the only options that we with JD's face.  I still hold to my opinion that big is better than small and that assessment can be applied to any organization, be it law firm, corporation, charity, public interest firm, etc.  In fact, I think that working for the government is a great fit for women and not just for the typical reasons like work-life balance.  The US government is probably the largest organization that any of us could work for—so it meets my size threshold, and then some!

All I can say is that is amazing.  (I wasn't sure if I should post this comment on this post or on the one about big law perks.)  This is another reason to work for a big firm.  I only got 6 weeks maternity leave when each of my two kids were born and had to use other accrued vacation time in order to say home just 2 months.  18 weeks!!  That is really awesome.  I can't imagine other legal jobs being able to give that sort of benefit.
I've also noticed that Latham is a Ms. JD corporate sponsor—good for you!
Story at Abovethelaw.com.

The Texas Women Lawyers came out with the report from their Maternity Leave Policy Survey on March 11, 2008.
"The survey responses indicate that the larger the firm, the more likely the firm will have a written leave policy for attorneys."