Billables: on their way out? 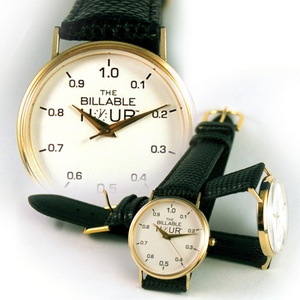 Over at the WSJ Law Blog, they have a post up today entitled "The Billable Hour: Still the Lead Dog, But Gaining Competition" on some changes to the standard billing practice of law firms, namely the alternative practice of using fixed fees for legal services:

“Cisco, a leader in the area of so-called alternative billing, now farms out 70% to 75% of its annual legal budget, estimated at $125 million, under fixed-fee arrangements.”

This follows a speech on the state of technology in the law by Cisco’s General Counsel, Mark Chandler (mentioned earlier here) in which he highlighted the decrepit business model that is the modern law firm:

“Put most bluntly, the most fundamental misalignment of interests is between clients who are driven to manage expenses, and law firms which are compensated by the hour.

The current system also misserves the lawyers themselves, particularly the associates, also known as the next generation of partners. In most of my major law firms, I see more and more problems retaining associates. I am inundated with resumes of top notch associates who don’t want to work in large law firms any more.”

Now, this is probably a realization that many people have had, a-ha moments that have made this stunningly simple realization pop into their minds. Alternatively, it can be summed up in one word: duh. goes on to point out this is both a generational divide, and a product of a horribly outdated business model:

“Upending one’s life to support inefficient means of communication, driven by a billable hour system, to maintain a relatively slim chance of making partner, just doesn’t cut it. And when the next generation heads for the exits, it’s a sign of a business model under stress.

But if the economic system of the firm is frustrating to associates and even some partners, I can tell you that from the standpoint of a metric driven general counsel, it is more than incomprehensible. It looks like the last vestige of the medieval guild system to survive into the 21st century.”

So it seems pretty obvious, when stated in this way, that law firms are just not cutting it, for their clients or for their employees. You’d think this means change, right? That to save themselves and their future, firms would be exploring these alternative business methods (since they sound win-win for everyone). Well, it doesn’t appear likely, and these articles make it clear that change will come from the clients’ side, and/or from the growing issue that is associate retention. Aside from the attention that Cisco and other clients have brought to this, even older calls from within the profession (like the ABA Commission on Billable Hours Report) have apparently passed on deaf ears.

So, Ms. JD readers: what will it take to make the firm dinosaurs evolve?