Book Review: Rebuilding Justice: Civil Courts in Jeopardy and Why You Should Care 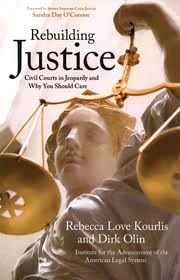 As someone who spent time representing low income clients during law school, I’ve always been a little (ok,  more than a little) skeptical of who the “justice system” was set up to work for. I’ve been perceived by judges and court administrators as both a client and an attorney, and the difference in treatment I received in each of those roles was startling. When I read a synopsis of Rebuilding Justice: Civil Courts in Jeopardy and Why You Should Care, I knew I had to get my hands on a copy. When page two proclaimed, “The only person in the room who benefited from the docket method [used by the courts on my first day as a judge] was the judge. Everyone else waited, spent money on attorneys, and wasted their time. The system was a court-centric model – not a user-centric model,” I was sold.

Rebuilding Justice is written by journalist Dirk Olin and former Colorado Supreme Court Justice Rebecca Love Kourlis. Kourlis is also the founder and executive director of the Institute for Advancement of the American Legal System, and organization dedicated to improving the process and culture of the civil justice system. The book is part civics lesson, part law school intro, and part call to arms if IAALS’ mission. The authors highlight three key problems the courts face: budget cuts, expensive and time-consuming pretrial procedures, and reduced access to courts.  And I will say… I was convinced.

Budget cuts have been a hot topic in the press; yet, it is still easy to forget (or simply not see) the impact these cuts have on our judicial system and, ultimately, our form of government. Rebuilding Justice takes all of those hmmm-this-seems-like-it’s-probably-a-bigger-deal-than-evening-news-realizes hunches that you’ve been having at puts them into a succinct, coherent, and easy to read 200 pages (with handy charts and a glossary in the back!).

My only criticism is that the middle of the book was so matter of fact that it got a bit dry. That minor issue doesn’t stop me from recommending it though. In fact, I wish that it had been printed while I was still in law school. It would have been helpful both in understanding the civil court system and the problems that face it.  All in all, it was a useful book that provided a digestible overview of the problems plaguing our courts as well as some uplifting suggestions as to how we can get ourselves out of this mess.