Chief Justice Sharon Lee: Finding Balance and Being a Voice for Gender Equality

By Gabriella Martin • May 27, 2016•Issues,  Balancing Private and Professional Life,  Sexism, Sexual Harassment, and Other Forms of Discrimination 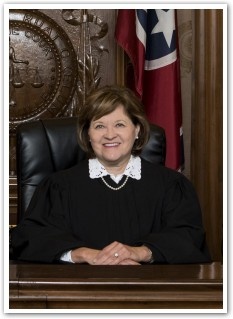 O’Connor. Ginsburg. Sotomayor. Kagan. All of these justices have become household names in large part because of the steps they’ve taken for the advancement of women in the legal field. However the legal profession—the bench in particular—has many other strong women whose fight for gender equality and female empowerment is just as important and tireless as any. One woman in particular, Chief Justice Sharon Lee of the Tennessee Supreme Court, is calling for an increase in women in top leadership positions both within the legal field and outside of it. I had a chance to speak to Chief Justice Lee and learn more about her thoughts on gender equality (or inequality as it were) in the legal field.

“When I started practicing law, I was the only woman lawyer in my county,” said Justice Lee. “I was treated differently and not always taken seriously. I was called ‘honey,’ ‘young lady’ and other sexist names. I was not deterred and eventually proved I was as capable, if not more capable, than other lawyers.”

She credits her father, who served in the Army Air Corps in WWII and was a POW in a German prison camp, with teaching her the endurance she would later need to overcome the obstacles she faced as one of the few women practicing law in Tennessee in the 1970s and 80s.

“I learned if you work hard, you can overcome obstacles,” she said. “I knew I had to be better prepared than any male attorneys just to be considered equal. This caused me to be a better, more effective lawyer.”

As far as female mentors are concerned, Justice Lee shared that she owes much of her dedication to public service to her mother who served as the Monroe Country Clerk and Master for almost four decades. While she does use her title as Chief Justice and her work on the Tennessee Supreme Court to encourage young female attorneys in their careers, Justice Lee also works with the Knoxville YWCA and the Boys and Girls Club to help women of all ages and professions.

For Justice Lee, helping and supporting other women is one of the most important things that we as women can do. Keeping an open mind and graciously receiving the advice of those (especially other women) who have more experience and wisdom than you is key. I mention other women in particular because Justice Lee is quick to point out that if she had a chance to do it all over again, she would “not be as accommodating and accepting of gender discrimination.”

She believes being a voice for gender equality is about finding the right balance: between standing up and being receptive to advice and constructive criticism; and between professional life and personal life. And passing the importance of balance on to her two daughters is what she considers to be her greatest personal achievement.  The idea of mentoring and passing experiences on should not just be limited to the relationship between mother and daughter. Justice Lee shared that another important aspect of women supporting women is women helping the next generation through mentorship and creation of opportunities.

This creation of opportunities only occurs in a meaningful way when women move into top leadership positions and are able to create pathways for the next generation of female professionals. Which is why, as she said, closing the professional gender gap must continue to be a top priority.

Given the trails forged by women like Chief Justice Lee, I have no doubt that with continued efforts by my generation and possibly the next, we will be able to transform that priority into a reality.

**Thank you to Chief Justice Lee for taking the time out of her busy schedule to answer our questions and to her assistant, Shelley Ward, for facilitating the interview.**