Courtrooms or Playpens: Choices of the Modern Female Attorney 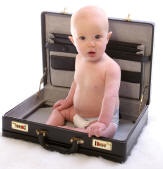 I am proudly graduating from law school in just a few weeks. Like many of us graduates, while I’m excited to conquer the legal world, I’m also fearful of the many choices that I’ll face now that I’ve a law degree. As a woman, I’m particularly concerned about the decision to have a family.

It’s frustrating to face the reality that when we become mothers, our status at work will change. We will be forced to choose between staying at home or going part-time at work, meanwhile passing up promotions or a partnership track, or staying at work and not fulfilling the necessary role that a mother must play. Making the decision to have a baby should not have to be a career decision. The “mommy war” buzz between those vindicating for stay-at-home motherhood versus those justifying the working mothers role at home definitely got me thinking, will I have to give up or somehow compromise my law career if I want to have a family?
Whether or not my employer provides paid maternity leave might influence the answer to this question. International studies have shown that access to paid maternity leave benefits helps women stay in the workforce. is a perfect example because it has the most progressive parental leave in the world, providing over a year of paid leave to its citizens. This has provided with the highest percentage in the world of women in the workforce. However, these statistics are slightly deceiving. While these generous leave policies make being a mom easier, these benefits are also enhancing the glass ceiling and affecting female employment in the most lucrative and powerful jobs. Swedish women most often find themselves in lower- to mid-level jobs in the public sector rather than advancing in private industry – they rarely hold powerful high-paying positions. Only 29% of Swedish women hold important managerial positions compared to 45% of women in the Also, the gap in wages between men and women in may be a mere 15%, but in high-end jobs this wage gap often exceeds the 40 percentile. This occurs in primarily because private sector employers are hesitant to deal with the disruption caused by lengthy leaves, so they shy away from hiring women in their top positions. This result suggests that government-mandated policies are not likely to be successful unless there is buy-in from the private sector.
Here in the we have the Family and Medical Leave Act (FMLA), which provides job protection, but does not offer any financial support for those women that take leave. The FMLA allows an eligible employee up to 12 weeks of leave during any 12-month period. Family leave under the FMLA was enacted to be more encompassing and has been defined and utilized by employees in numerous ways. In particular, family leave can include time needed for the care of a sick child, spouse or parent, or more traditionally the time needed to care for a child following childbirth or adoption.

Something many may not know is that the is an anomaly in the world with regard to paid maternity leave because it is only one of two industrialized nations in the world not to offer it. is the only other developed country to join the in their lack of providing this social benefit to its citizens. However, is much closer than the at adopting such policies. This fact has many future moms arguing that the ought to follow the lead of countries like . Something less obvious is that the has fundamentally different goals than other developed countries with regards to its family leave policies. Most notably, other nations, such as and , expanded maternity leave after World War II to combat diminishing birth rates and encourage childbearing. Americans aren’t driven at all by population concerns. Rather, we contend with cultural philosophies, economic regimes, and political pressures that work against such policies.

By not federally mandating paid maternity leave, the has allowed maternity and family friendly policies to be left to the states and the private sector. A small number of states, like , have adopted paid leave legislation, and as many as 20 states have paid leave proposals under consideration. Gaps do still remain, but overall, paid leave schemes have been a success for many working mothers in part because states and private companies can adjust to the specific needs of their worforce. This market-based approach to paid family leave has been particularly successful on the private sector.

Women in my class often talk of working for the public-sector in the hopes that the 9 to 5 job will give them the flexibility that they want to raise a family and still have a legal career. What many of us don’t realize is that small businesses are likely are best bet. Smaller companies and firms are now recognizing the benefits of providing family leave benefits to their employees. A 2004 National Small Business Poll showed that small-business owners grant virtually all requests for family leave. Small businesses are more likely to have the ability to be flexible with employee benefits. In many smaller firms, flexibility is key to the company’s culture. Women just have to be willing to ask for it! Many small businesses will do practically anything to accommodate and retain a valued employee. So, even though polices may vary from firm to firm, employers tend to aim for policies that are economically sound and morally responsible. These factors create an attractive work environment for women. Flexible arrangements are important for women hoping to balance family and career. Even though the public sector may allow for a guaranteed 40 hour work week, government agencies implement a one-size-fits-all policy allowing little to no flexibility. The ability to negotiate is nonexistent, and opportunities for part-time work in an advanced career field are slim to none. The public sector is anything but family friendly, whereas the private-sector allows room for negotiation between the employer and employee for the time we may need to suit our family needs.

Regardless of the career path we choose as legal professionals, when it comes to facing the choice as to whether or not to have a family, the most important thing we can do is be sure to negotiate for what we need. We have worked hard to be where we are today, and there is no reason that having a family should force us to give that up. When the stick turns blue, I hope I’ll embrace the possibilities of being a lawyer-mom and remember that I live in a culture of choice. I’m hopeful that if play my cards right, I might just get the best of both worlds.

<div align=“left”>I agree with your point about negotiating for what we need, and I share your concern about working and having a family.  I think as long as we have the idea that this is a women's issue, and that going back to work means "not fulfilling the necessary role that a mother must play," the problem won't be solved. We could have a whole year of paid maternity leave and a guaranteed job when we get back to work, but if men never take leave to care for their kids, family leave will be stigmatized. Likewise, if moms are the only ones who leave to go to school plays, then they'll be seen as not pulling their weight; if all parents leave to go to school plays, it'll just be seen as something the workplace needs to accommodate.</div><div align=“left”> </div><div align=“left”> </div><div align=“left”>More pessimistically, I think it's naive to say that "[m]aking the decision to have a baby should not have to be a career decision." Of course it is. Caring for a baby is a full-time job.  When you make the decision to have a baby, you have to give certain things up. You're not going to work 100 hours a week—or, for that matter, go out to bars every night or spend the summer backpacking through the Himalayas—and still be able to care for your child. Maternity leave or not, having a baby affects every major decision in your life including your career. If we don't want it to affect our career prospects, though, and we want to achieve parity with men, men have to factor their kids into their careers just as much as women do.  I think it's beginning to happen. </div><div align=“left”> </div>

The comment here is right on about parenting being stigmatized as a woman's issue.
When a dad leaves the office to attend his kid's soccer game, he's a hero dad (more so if the event is a daughter's sporting event or a non-sporting event like a play or concert because 'what man would want to attend those voluntarily?').
When a mom leaves the office for anything involving her family, she is distracted and a burden to the other employees. Maybe frequency of these escapes is part of the equation which is exactly why the comment here is so right. Parenting should be a two-person job, with equal responsibility and equal credit.
This is social and cultural change we are talking about.  Part of it rests on moms—we need to stop taking all the credit for childrearing.  Part of it rests on dads—they need to take on a bigger role and stop shoving all the responsibility and credit onto women.  Part of it rests on non-mom women who need to step back and stop making assumptions about other women and feeding the fire against working moms (and for that matter, stop assuming what it would be like to be a mom until they are one).  Part of it rests on the media and other influencers of our culture to stop encouraging the mommy wars and pressuring moms to take on most of the parenting duties.