By Tiffany Haines • April 21, 2016•Features,  Guest Bloggers and Profiles of Women in the Law 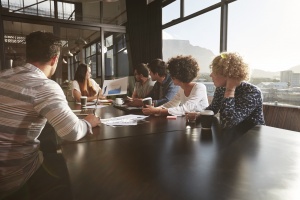 One of the great ironies of the American legal system is it’s passionate championing of gender diversity, equal pay, and equal rights for women in the workplace. At the same time, as America has been vocal about the need for laws that govern and more closely monitor gender diversity and equal pay, legal environments – from governance to private practice – have failed to follow suit, or lead by example.

In other business sectors, there are many factors that lead to a leadership gap between male and female professionals. Cultural obstacles in specific industries that have been traditionally male-dominated (including IT, STEM, and skilled trades) have consistently contributed to a barrier for new career opportunities, and specifically advancement into positions of executive responsibility for women in North America.

Part of the problem is tradition, and another equal part may be attributed to ignorance of the laws that exist to govern equal opportunity and anti-discrimination laws. However, in a legal environment, the contradiction exists where partners, investors, and board and committee members have an infinite amount of legal knowledge; yet, few apply it in their business models to bridge the gender gap. And it is not difficult to understand the persistent cultural and professional disparity.

How Big Is the Problem for Female Law Professionals?

On April 19, 2015, Law360, a New York-based research and media outlet, reported the findings of a survey that involved more than 300 American law firms, called “The Glass Ceiling Report.” The study was conducted in 2014 to determine if women were dramatically underrepresented in leadership and executive roles within law firms in the United States.

The results of the findings are available online, but research data revealed that:

Updated statistics were reported by the American Bar Association’s “Commission on Women in the Profession” report in 2016. In addition to a pronounced gender and opportunity gap in law firms, there is also a widening ethnic and racial gap emerging. Specifically, the American Bar Association draws attention to the number of African-American associates, which are declining in numbers at all levels of tenure.

The report offers some additional valuable insights regarding opportunities and advancement of women within the American legal practice and educational institutions:

When you review the statistics, you begin to draw a very accurate picture of the problem that starts far higher than at the individual law firm level. What is in practice at the Federal and State judiciary system is being closely mirrored and replicated statistically in law firms. The place where laws regarding equality, fair pay, and opportunity are drafted are currently representative of some of the largest examples of professional inequity for women in law. Which prompts the question: “Why is the legal community not setting an example for other industries to follow?”

All law firms are innocent until proven guilty of deliberately creating a glass ceiling for female lawyers and legal professionals. Despite the statistical evidence of inequity at the highest levels of American legal practice, there are many organizations that have made a point to address the gender gap publicly, and successfully within their practices and organizations.

Mentorship is something that is being addressed at leading law firms, offering equal support to talented female legal professionals as is provided in the stereotypical ‘boys club.’ The answer is not to create a female inclusive and male exclusive rebuttal, but to encourage mentorship based on talent and accomplishment, whether from male or female legal professionals.

A benefit to large firms that have prioritized gender and ethnic diversity resides in public satisfaction and public relations. Large corporate clients that are implementing gender parity want to see the same principles adopted by suppliers and service providers. Large firms that address the issue may not only find themselves capable of recruiting exceptionally talented female lawyers, but new business and public favor. And that is very good for the bottom line and long term growth strategy for legal firms.