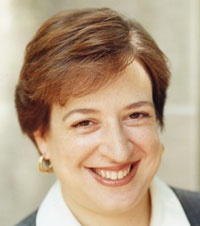 Kagan came to Harvard Law School as a visiting professor in 1999 and became Professor of Law in 2001. While on the faculty, Kagan has taught administrative law, constitutional law, civil procedure, and a seminar on the law surrounding the presidency.

From 1995 to 1999, Kagan served in the White House, first as Associate Counsel to the President (1995-96) and then as Deputy Assistant to the President for Domestic Policy and Deputy Director of the Domestic Policy Council (1997-99). In those positions she played a key role in the executive branch’s formulation, advocacy, and implementation of law and policy in areas ranging from education to crime to public health.

A leading scholar of administrative law, Kagan’s recent work focuses on the role of the President of the United States in formulating and influencing federal administrative and regulatory law. Her 2001 Harvard Law Review article, “Presidential Administration,” was honored as the year’s top scholarly article by the American Bar Association’s Section on Administrative Law and Regulatory Practice, and is being developed into a book to be published by Harvard University Press. Kagan has also written on a range of First Amendment issues, including the role of governmental motive in First Amendment doctrine, and the interplay of libel law and the First Amendment. Her works in progress include a new casebook on administrative law.

Kagan launched her scholarly career at the University of Chicago Law School, where she became an assistant professor in 1991 and a tenured professor of law in 1995. In 1993, Kagan received the graduating students’ award for teaching excellence.

Kagan clerked for Judge Abner Mikva of the U.S. Court of Appeals for the D.C. Circuit from 1986 to 1987. The next year she clerked for Justice Thurgood Marshall of the United States Supreme Court. She then worked as an associate in the Washington, D.C. law firm of Williams & Connolly from 1989 to 1991.