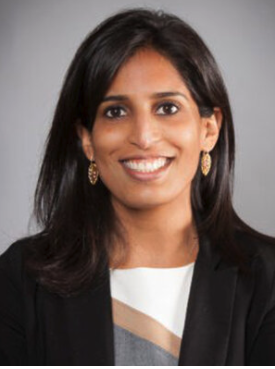 This month, I had the opportunity to interview Juvaria Khan, founder of The Appellate Project. Ms. Khan's nonprofit aims to empower law students and lawyers of color in the appellate field through educational outreach, a Civil Rights Clinic at Howard University School of Law, and a summer fellowship incubator program. Prior to her role at The Appellate Project, Ms. Khan clerked for the Honorable Michael P. Shea in the District Court of the District of Connecticut. She also worked at Patterson Belknap Webb & Tyler LLP, maintaining a heavy pro bono practice focusing on racial and religious discrimination claims. Finally, she has served as a Senior Staff Attorney at Muslim Advocates, a national legal advocacy organization.

Can you tell me about the decisions that led you to start The Appellate Project? Was there ever a moment when you decided, “I need to do this?” and if so, what was that moment?

It felt almost like a lightbulb going off, but in retrospect there were a lot of breadcrumbs that led me here. I certainly had no idea what appellate work was when I went to law school. I didn’t know about clerkships or how to navigate the legal profession. What I did know was that I wanted to do work for my community, and marginalized communities more broadly, and that I wanted to have an impact.

When I began doing impact litigation, so much of what I did was watch the appellate courts. The law is often intersectional—one case impacts another, and your case affects another one down the road. So you’re always trying to think not just about your individual case but ten steps ahead. I was struck by how exclusive of a club it often felt like as to how got to lead those cases and just how little racial diversity exists amongst those appellate practitioners and judges.

That absence of racial diversity is a real problem. Appellate lawyers get to shape these incredibly important arguments, and not infrequently they go on to other prestigious positions, like becoming judges themselves.

Appellate judges engage in the deliberative process to determine what our laws mean, without any juries. Appellate decisions often disproportionately impact communities of color, yet people of color and their lived experiences are so often not represented.

The result is that the communities most impacted are often the least represented. Seeing that again and again in so many cases made me take a step back. I thought about why I went to law school in the first place. I could continue working on these cases as an individual, but what if there were ways to address the systemic barriers that so often prevent law students of color from accessing these spaces and doing this work?

There are so many brilliant students out there who don’t know what appellate work is or feel discouraged from seeking these opportunities out. They would be phenomenal [at doing this work], but they lack the information and access. All of that is what led me to develop programs designed to address these issues, and ultimately, to the launch of The Appellate Project.

What, in your opinion, is the most significant hurdle or challenge for students of color who want to become appellate lawyers and judges right now?

It’s really a domino effect. Systemic racism makes it harder to get your foot in the door to begin with, particularly for students who bear its brunt. Our profession does not acknowledge enough that simply being able to go to law school is a huge privilege, especially a top-ranked law school.

Second, a lot of law students of color are first generation and coming from communities where they didn’t know any lawyers. When it comes to appellate work, they often don’t know what it is and don’t have anyone encouraging them to take a look.  You don’t know what you don’t know, so you miss out on the steps you need to take to get your foot in the door. There’s a huge asymmetry of information.

Knowing how to navigate these spaces [is an important factor]. Law school is a huge cultural shift for a lot of us and it can feel like an insider’s game to know [the answers to questions like] who is the right professor, who will give me the right recommendation, when do I apply, how do I afford flights to go to my interview, what classes should I be taking, and so on. When you’re the first from your background in this environment, you often don’t have a network to guide you. It can be a huge disadvantage, especially because the majority of appellate recruiting and hiring is network-based.

For those students of color who do hear about appellate work, some self-select out because they are discouraged by rarely, if ever, seeing anyone from their background in appellate spaces. When you don’t see anyone who looks like you, the message you receive is “you don’t belong here.”

Others are discouraged by the messaging around appellate work as being this elite, hard-to-access area of practice that is largely academic. In other words: “Don’t even bother.” A lot of students feel discouraged and self-select out of appellate-related opportunities because of these implicit or explicit messages.

I felt that when I was discouraged from applying for appellate clerkships. And unfortunately, I still hear the same story constantly from law students of color around the country, regardless of how strong their grades are. I cannot say enough how important it is to have folks simply believe in and encourage you.

As we know, Article III judges are appointed by the President and confirmed by the Senate. Around 70% of President Trump’s judicial appointees are white men. What can be done to encourage diversity in the judiciary? What about to nurture diversity in the appellate bar?

We’re in this moment where there’s a national conversation about the continuing impact of systemic racism and how Black communities too often bear its brunt. At the same time, we’re still stuck in the same conversation asking why there isn’t more racial diversity in the judiciary and appellate bar. We have to connect the two. To simply say that only the smartest end up in these spaces wrongly implies that those who don’t aren’t that smart. We have to be honest about the policies and practices that created this environment. Understanding how to move forward requires understanding how we got here.

It also requires a cultural shift in how we view diversity. We need to appreciate that when we have diversity in our highest courts, it benefits all of us. We all should want different lived experiences and perspectives in these rooms, because appellate attorneys and judges are making decisions that impact all of us. I am a Muslim, Pakistani-American woman from rural Arizona. That is a unique experience - but it’s not the experience of every other person. And I could not speak to everybody else’s experience. If I was tasked with deciding how the law should apply to others, I would want people from different backgrounds in the room. That’s what equal justice under law requires.

Part of this cultural shift also relates to how we view the role of judges and those in their chambers. Judges are public servants. They are working in the public interest, and it’s important that they reflect the public as well. That’s necessary for our judiciary to be effective and to serve as an institution that the public trusts.

With the appellate bar, a big part of the problem goes back to this idea of a meritocracy – that it’s only the “best and brightest” who end up in these spaces. That often means [we include only] the top law student at the top law school who knows the right people to help them get their foot in the door. This is a really elite, insular approach that doesn’t account for the continued impact of systemic racism, and it leaves out a lot of very qualified people students of color. And it means less of these students will end up being positioned for a judicial position later in their career.

Systemic change is not easy, but one thing I hope to do with The Appellate Project is encourage people to think about the power of their individual decisions. How we recruit, support, hire, mentor, give assignments—the cumulative effect of those individual decisions is huge. It can change a system.

If you had advice for your former self as a law student or recent law school graduate, what would that be?

I felt so out of place in law school the entire time – talk about imposter syndrome. I remember thinking I was going to drop out after the first week of school. I literally didn’t understand what people were saying in class. I remember going to a professor’s office hours and saying that it felt like people were speaking a foreign language. His response was, “Well, you better figure out how to learn the language.” And that was it. It felt demoralizing. But I finally went to another professor’s office hours and told her the same thing. She replied, “You are the fifth student to come to my office this week and say that.”

I share that story to say, I wish I could go back and tell myself, “You are more than capable of being here.” I ended up doing well enough my first year to transfer to Columbia. When I think back to those moments of feeling so dumb and out of place, [I would tell myself to] have confidence in myself and know that I deserved to be there just as much as anyone else, even though I didn’t have the same background as others.

Also, [I would tell myself] to be proactive. It may be that the first, second, or third person that you reach out to, doesn’t give you the support that you need, but keep going. You will find someone who does. Just be proactive in finding those people, because they are always so many great people out there. Don’t be embarrassed to ask them [questions]. You might feel like, “Everyone knows how to navigate these things; why am I asking these stupid questions?” Don’t. Why would you know these things? Ask the questions.

Finally, I’d tell myself to not discouraged if things don’t work out perfectly the first time. It’s easy to feel in law school that if you don’t get the perfect job, grade, etc. your career is over. It’s not. Grit is critical. Keep at it, and approach every perceived setback as a learning opportunity.

What can students do to advance your mission at the Appellate Project?

This organization is for law students of color to feel seen, encouraged, and hopefully to have the same access and opportunities as their peers when it comes to appellate work. Helping amplify the word about what we’re going is a huge help. Second, we are a new nonprofit run entirely on donations. If you’re in a position to help pay it forward, even $10 or $25 can make a big difference in helping us meet the demand for our resources.

Perhaps most importantly, think about your own power and privilege. How are you using it? Don’t underestimate your individual power to create change in the spaces you’re in.