Does Looking Sexy Advance Your Career (and even if it does, should you care)? 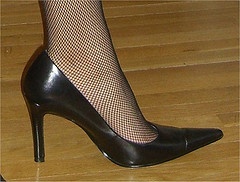 Bitter Lawyer has a post by a very modest writer known at least to herself as "Law Firm 10" (yes, her nom de plume should give you a sense of where the article is heading) entitled Erin Andrews, Esq.  Erin Andrews, TV sports reporter, is, according to Law Firm 10, a "(reasonably) stylish, non-overweight, attractive woman," and consequently "men love her and, surprisingly, even respect her," which Law Firm 10 credits as the reason that Erin Andrews' "career is blowing up."  Question 1: why do we need men to love and respect us in order for our careers to blow up?  Of course we need respect from our superiors, from the people who make the decisions about who gets promoted and who doesn't, who gets the best assignments and who doesn't, but are all of these superiors men?  They shouldn't be.  Hopefully they aren't.  But even if they are, does it really help women move forward to get ahead by pleasing men the old-fashioned way (you like what you see, throw a great assignment my way, and maybe I'll wear a tight shirt to the meeting and bend over in front of you)?  SERIOUSLY?

Law Firm 10 is serious.  She wants to make Erin Andrews the "patron saint" of women lawyers.  I'm unclear why our patron saint wouldn't be, oh I don't know, maybe another female lawyer.  Jamie Gorelich?  Janet Reno?  Hilary Clinton?  These women would probably get the same criticism that Law Firm 10 has for her contracts professor: "disheveled, frizzy-haired, makeup-less," leading Law Firm 10 to conclude "women like her aren't supposed to look sexy."  Or maybe they just choose not to look sexy at work.  Who knows whether that same contracts professor painted the town red every night after work.  The point is: at work, you are there to be judged on your performance.  Why do you need to look sexy?  Isn't it UN-professional to bring that part of yourself into the workplace?  All these professional women have driven Law Firm 10  to the "unfortunate conclusion that most female lawyers are horrible dressers.  Worse yet, they don’t care.  They almost take some sort of absurd, post-feminist pride in looking ugly.  The uglier you are, the smarter you are, which means the more successful you’ll be.  Right?"

Now as far as I know, Law Firm 10 is not a law partner.  She's not a Supreme Court clerk.  She's hasn't started her own firm or made a name for herself as a trial attorney.  Nonetheless, she is here to tell you that "not caring about your appearance is career-suicide.  Or at least career-idiocy."  We can probably all agree that failing to shower for weeks in a row and wearing a t-shirt into work won't win you points with clients, judges, or the partners.  However, Law Firm 10 is still committted to getting noticed not for exceptional performance and hard work but rather for her looks.  According to her, "especially for young associates," the way to "advance" is "looking good."  As someone who isn't afraid to use her "genetic good fortune," she has no problem telling you that "it’s no coincidence that [she's] one of the only female associates whose name comes easily to the managing partner and is often invited to client dinners.  [She's] pretty sure it’s not because [she's] a better researcher or writer than the other 50 women lawyers at [her] firm.  [She] just dress[es] better."

Am I the only one who wants to vomit?

I have a feeling that LawFirm 10 is a man.  Bitterlawyer.com is a humorous site.  It often has decent material and the short video series is pretty funny.  However, it is definately entertainment for men.  The articles, the videos, etc, it is all targeted to white men in their 20s who need a date and a life.  I was actually just on that site today because I heard that the last "Living the Dream" episode of the "season" was posted.  After watching the video (undeniably targeted to men) I went to their holiday gift giving article and the things they’ve recommended for women are really terrible ideas!