Does Your Partner Hide Behind Your Skirts? 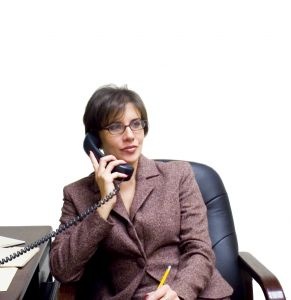 I’ve come to take for granted some of the skills law school gave me: A) an ear for logical arguments, B) an ability to understand terms in contracts, and C) a calm and reasoned way to articulate A and B. So natural have these things become, in fact, that my partner now expects me to deal with any glitches that come up with anything vaguely contract/law-related. I don’t mind, but, as it turns out, other people do. Why? Because they want to “deal with my husband.” We recently moved and, in the process, had a dispute with both our landlord and our mover (both men). The landlord claimed we owed him money beyond what was in the contract (hello, parol evidence rule). The mover violated a federal statute on weight bumping and overcharged us by over $1,000 (seriously, read the statutes before you go into business for yourself). In both cases, I was the one who fought for our pocketbook. In both cases, I was told that the mover and the landlord wouldn’t deal with me and that they would only discuss things with my husband. True, he’s nicer than me, and he’s not a lawyer. But, if the reverse were true, and he were the lawyer and the mean one, the mover/landlord would never say, “You know, I think I better deal with your wife on this one.” Men, in many cases, fear, dislike, and/or loathe powerful women, and as lawyers, we are powerful women.

In both of cases in point, I had winning arguments because these men were basically trying to pull one over on us. Anyone who could google the federal statute or read the contract could reach the same conclusion, lawyer or no. In both cases, the men found themselves backed into corners because I was politely, calmly, and firmly pointing out the transactional problems, which were basically irrefutable. Yet, in both cases, I did not get an apology or a resolution because the men were extremely aggravated that they had to deal with me. They didn’t want a woman pointing out their errors and proving that they owed us a refund. They particularly didn’t want a woman lawyer telling them these things. No matter how sweet and polite I tried to be, they acted as though I were trying to emasculate them, and it occurred to me that our society creates an environment where it’s practically impossible for a woman to be self-sufficient and assertive (i.e. making herself MORE) without making some man, somewhere, decide that he is threatened, that he is somehow made less. Frankly, it really makes me angry.

I’d never really made these connections before (I guess I’d never thought about it, and it’s easy to write off certain men being rude as due to something else when they are isolated incidents). Facing such similar from two different men within a week of one another really brought it home to me, though, and I couldn’t ignore that something deeper was going on. In both cases, the men knew I was a lawyer because of earlier conversations we’d had about my move. And, when the gloves came off, and I was pointing out why they were violating our contract terms, both became incensed (even though I was calm), and both made troubling remarks about how “I thought I was so smart” but really I wasn’t, and—in an extremely bizarre coincidence—both then told me that they could be a better lawyer than me any day. So, we have a mover and a landlord, living in geographically different areas of the U.S., completely unrelated, with nothing in common except that they both have had the misfortune to try to cheat a woman lawyer. Both react by telling said woman lawyer that she is stupid and that they could (if they chose) be better at her job than she will ever be. They essentially turned professional conversations personal and viciously attacked my intelligence and professional capacity rather than deal intellectually with the issue at hand. In both cases, the conversations ended with the men insisting that they would not deal with me. My partner had to follow-up. In both cases, we got our money back, and all he had to do was repeat the arguments I had already made. But, they didn’t want to cede to me. They wanted to cede to a man. He didn't get away unscathed either. When he did call to get our money back, he was berated for "hiding behind my skirts."

You know I wonder if some of this attitude is regional.  In other words, I wonder if it is less so on the coasts than in the middle or southern regions of the country.  I have no reason to think that it would be except that I live on the West Coast and don't run into this all that often.
However, I will share that when my partner and I were (fairly recently) signing a rental agreement for a house my husband looked at the papers for two seconds and then handed them to me and said out loud, "I'll have my lawyer wife read through this."  The landlord laughed at that comment, acutally laughed!  I don't know if he didn't believe that I was a lawyer and thought that my partner just called me that for fun, if he was laughing at the fact that a man would defer to his wife to read a legal document, if he thought it was funny that a woman could be a lawyer, or ... if it was some sort of nervous reaction to the realization that he just agreed to rent his house to a lawyer!

Your comment made me think about what it takes to move ahead as a woman, Lena, and I think that if it's true that women are pigeonholed into the "hysterical female" stereotype as argued here when they show emotion, then perhaps intellectual women are socialized from an early age to address arguments on their merits to be taken seriously.  If people are less likely to blow men off for displaying anger, then they may not face the same consequences for name calling and other behaviors that are more about personal emotional responses than about the actual issue.  Thanks for bringing up this new angle!