Don’t call me a “woman lawyer”

By Anonymous • June 11, 2007•Sexism, Sexual Harassment, and Other Forms of Discrimination 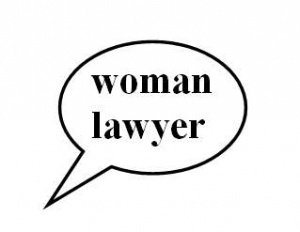 In 1848, Charlotte Bronte wrote in a letter to William Smith: "I am neither a man nor a woman but an author." She was quick to defy gender classifications as she sought to be judged equally and apart from her male colleagues. While she spoke defiantly about gender in her letter, she would publish literature under men's names for over fifteen years, veiling her identity for fear that the "mode of writing and thinking was not what is called 'feminine'" and aware that "authoresses are liable to be looked on with prejudice." She sought to transcend the prism of gender, but she did not live to see such a society. She died even before hearing the well-won praise of her work.

Over a century later, I stand on the shoulders of Bronte and others who fought for women's rights, and I find myself uttering the same words: "I am neither a man nor a woman but a lawyer." I recite the phrase like a mantra, but, like Bronte, realize that I do not yet live in a gender-blind society. Admittedly, women have made enormous strides. In the past century, women have won the right to an education, right to vote, and the right to equal wages.

As an example of such progress, my great-grandmother once dreamed of becoming a judge. Although her father was a well-known judge, she was denied the opportunity even to attend law school. Yet, three generations later, her own blood will be able to celebrate her memory and achieve her dream by graduating law school. Meanwhile, women are streaming into the legal and professional schools and setting themselves apart from their male counterparts.

Women have achieved much, but we must still charge forward. In the legal field, women still are struggling to define themselves amidst their male counterparts. Women are still not viewed simply as lawyers but as "women lawyers." They are defined by their gender, and certain stereotypes generally follow. For example, women lawyers are commonly characterized as falling into certain categories: the lawyer-mother who has children and sidelines her work; the big-firm lawyer who adopts the veneer of a man to fight her way to the top; and the maternal legal services lawyer who works with the poor. These archetypes are, in part, based on trends in the legal field. Many women choose to leave the workforce to raise children. Others, like myself, hope to pursue a career in legal services, working to improve access to justice for the poor. While somewhat accurate, these caricatures limit how women conceive of their career paths. They also limit how women are conceived as they walk down those paths.

Women must redefine what it means to be a "woman lawyer." We must show that we are, first, lawyers, and that our career paths do not fit into three carefully constructed boxes. For one of the first times in society, we can do this. In ages past, opportunities were not available to women, but we no longer have such impediments. The only limits are our own imagination and ambition.

As we redefine ourselves, however, we must not lose sight of the benefits of being a woman. Rather, we should embrace our gender and reclaim the unique characteristics that are associated with it. Rather than rejecting our gender, we should recognize how being female enriches both our personal and professional life. For example, as a legal services lawyer, I recognize that I may be more effective in speaking with victims of domestic abuse, because I am a woman. My gender may allow me, for example, to better elicit the trust of such clients. These characteristics are present by virtue of being female and should not be rejected in an effort to defy gender stereotypes.

Thus, a difficult task lies ahead, and it is not one that women may entrust to others. Instead, we must plunge ahead. The only way forward is for women to redefine themselves--for us to redefine ourselves. Personally, as I forge ahead, I hope to live to see the day when I am not viewed only as "woman lawyer" but as both a lawyer and as a woman."

In her book Outrageous Acts and Everyday Rebellions, Gloria Steinem argues that we need to "over-correct" in our language for a few years (how long, exactly, is hard to tell) to overcome ingrained prejudices and assumptions. Before we switch entirely to gender neutral language, for example speaking of "police officers" instead of "policemen," there is value to speaking of "policewomen" ... making professional women visible in public discourse. The value to talking for a while about "women lawyers" is to underscore that we are women AND we are lawyers. These things can and do go together.