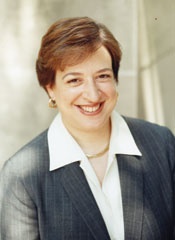 President-elect Obama announced key Department of Justice posts today, including the nomination of Elena Kagan for Solictitor General. Currently the 11th Dean of Harvard Law School (and the first woman in that post), Kagan served in Bill Clinton's White House from 1995 to 1999. During the Clinton Adminstration she served first as Associate Counsel to the President and then as Deputy Assistant to the President for Domestic Policy and Deputy Director of the Domestic Policy Council.

In addition to her current deanship at Obama's Alma Mater, Kagan and Obama taught at the University of Chicago Law School at the same time during the 1990s. Like Obama, Kagan was editor of the Harvard Law Review

If confirmed, Elena Kagan will be the first woman solicitor general.