Everything Nobody Ever Told Me: How To Deal with a Perfectionist 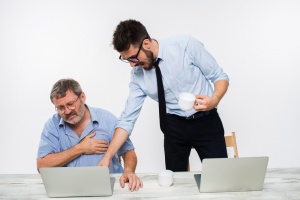 “Perfectionism is the voice of the oppressor.” – Anne Lamott

Have you ever encountered the kind of people who expect the impossible from others?  They view anything less than perfection as a failure.  They hyper-focus on your mistakes and they never seem to notice all the things that you do right.  You, my friend, have encountered a perfectionist.  While at first blush this term may seem like a compliment, the reality is that it is not.  Perfectionists should really be called “imperfectionists” because they don’t look for the perfection in others - they look for their imperfections.

There is a difference between a person with high standards and a Perfectionist.  High Standards people are positive people who appreciate and strive for excellence.  These people recognize and appreciate the abilities of others.  They hold themselves to the same standards to which they hold others and they are cooperative with others in their desire to improve.  They do not beat themselves up for making mistakes – and they do not judge the mistakes of others harshly either.  They take constructive criticism well and when they do well, they recognize and they enjoy their own success without minimizing – or exaggerating - it.

Perfectionists, on the other hand, are motivated by the need to survive rather than by the satisfaction of doing a great job.  They often tear others down – even those on their own team – in an effort to feel superior.  Everything has to be done their way and they often procrastinate, check and re-check their own work so much that they keep others waiting... and waiting and waiting.  They are often “too busy” or “too tired” to rest or to have fun because they cannot finalize a task, for fear that it is not perfect.

What do we do when these difficult people are placed squarely in our path with some control over our lives, however, so that distancing ourselves from them is not an option? For instance, in the workplace, one’s boss may be a Perfectionist.  As children, we may have had a parent who was highly critical and set impossibly high goals for us to achieve.  A neighbor on our homeowner’s association board may be in charge of our renovation approval.  Our child’s teacher may be a Perfectionist.  A family member may have this difficult personality.

What I have learned is that there are two reliable and consistent truths in dealing with all kinds of difficult people.  First, we do not have the power to change them.  Many people have wasted years of their lives attempting to change difficult people.  This is impossible, so let it go.  The second truth is that the only thing you can change about a difficult person is the way you respond to him or to her.  This is where the magic happens.

A Perfectionist is difficult with everyone – not just with you and so you can stop taking them personally.  You are dealing with a person who has been keeping a high level of anxiety at bay with the mistaken belief that if they just get everything right they can prevent anything bad from happening to them.  Perfectionists have adopted a world view that if you are right you are valuable but if you are wrong, you are worthless.  They feel that they have to do something spectacular in order to earn love and attention from others and they do not realize that their mere imperfect existence gives them the right to be highly valued and to enjoy their lives.  Perfectionists are projecting their own negative self-image when they hyperfocus on another’s negative attributes.  As frustrating as they can be they are actually hardest on themselves.  Ultimately the Perfectionist is an insecure person with low self-esteem.  That doesn’t sound like much fun, does it?  In that regard, perhaps we can have some compassion for the internal struggle that these people have and being able to see where someone else is coming from has always helped me to stop personalizing the negative feelings that are triggered by the difficult person - and maybe actually feel some compassion for his or her internal struggles.  Maybe.  :o)

If you find that you have a strong reaction to a Perfectionist, you may be internalizing some of their criticism.  In other words, maybe they would not bother you so much if there was a small part of you that believed in their criticism.  If you are feeling vulnerable or doubting your own abilities a Perfectionist who criticizes you, is probably going to make you really angry.  On the other hand, if you are very confident about your abilities and a Perfectionist criticizes them, his or her comments will likely roll off your back easily.

When a Perfectionist shows up in your life, it is important to gauge whether or not the environment you are in supports such behavior or not. It can make all the difference in the world if the difficult person is the only one who is difficult - rather than being entwined in a difficult 'culture'. I find a lot of comfort when I know that others around me can identify the Perfectionist in the group.  This person will get a reputation for being negative and critical and his or her opinions will be largely ignored by the rest of the group. If instead, the culture is one that accepts Perfectionism and tolerates the tearing down of teammates through criticism and negativity, then be thankful that you do not fit in.  This is a toxic environment that breeds very low morale, whether it be a workplace, a family or a religious community.  Time to move on.  Sometimes a whole group of difficult people are in your life to let you know that in order to flourish you need to move to a more positive and energetic environment where you will be seen, valued and supported.

There is nothing wrong with wanting things to be done right.  There is nothing wrong with offering and receiving criticism that is constructive and motivated by the desire to build up another.  Perfectionism, however, is about selfishness, negativity and tearing others down.  Its important to tell the difference between the two approaches in others and to make sure that we do not internalize any of the messages we are being given about our imperfections.

How have you handled the Perfectionists that you have encountered?

Paula, this is a great read! I always identified myself as a perfectionist, but if this is the definition, I’m totally not a perfectionist, I’m just a woman with high standards. I really enjoyed reading this blog. Stay safe out here! I hope all is well.

Thanks Crystal, its an important difference, right?  I find it helps female professionals stick to their guns when criticized for being too aggressive or a “bitch”, simply for having high standards for one’s business or project.  Big difference between tearing other people down and leading other’s to high standards.

Such a good post, Paula. Too many lawyers view their perfectionism as a badge of honor. I was guilty of this myself and have only recently started to understand how extreme perfectionism fuels my anxiety and hinders my productivity. Also, on an unrelated note, I’m in the middle of Anne Lamott’s Bird by Bird, and she is spot on about perfectionism. I felt called out in the best possible way.

Nalladina, I agree, I think some people confuse pointing out other’s imperfections as a way to make themselves appear that they are perfect (which, of course, they aren’t).  They don’t understand that people don’t see them as perfect - but as tearing others down.  I admit as a young adult I acted this way unconsciously until I noticed too many people were not very impressed with my “knowledge” but seemed insulted and hurt, as they had every right to be. Ugh, I SO did not want that!

Yes! This is great stuff!