Everything Nobody Ever Told Me: How to Prevent Anxiety During Interviews

By Paula M Jones • April 28, 2020•Writers in Residence,  Law School,  Choosing a Career and Landing a Job,  Internships and Clerkships 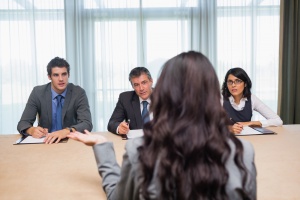 “To venture causes anxiety, but not to venture is to lose one’s self..” – Soren Kierkegaard

I have several colleagues who get really nervous during interviews.  They are all very accomplished in their fields and any organization would be lucky to have them.  One man sweats uncontrollably, to the point where the damp begins to seep through his shirt.  Another colleague loses her train of thought and forgets to make the most salient points about her work.  A third colleague gets so nervous he really is unable to listen to what questions are being asked and he comes across as vague and scattered.  Unfortunately, all report that they have been unable to land opportunities that would have been a perfect fit, professionally.

Verbalizing the points you wish to make ahead of an upcoming interview can help cement the thoughts in your mind so they are easier to recall, even when you are under pressure.  Meditating or quieting your mind in advance of an interview can also help.  Understanding that the people interviewing you may be as nervous as you, may also calm the nerves.

These are some techniques that will lessen anxiety during interviews.  However, if anxiety remains high enough to compromise the interview, it may be time to look deeper into the origins of those anxieties.

During a long period in which I was trying to make the move from a small firm to a large one, someone I trusted asked me if I thought I was good enough to work at a large firm.  Instead of responding with a confident reply, I hesitated.  I took a deep breath and tapped into a distinct feeling of insecurity.  I slowed down and I mentally walked through my past interviews again.  I decided to write down all of the beliefs and fears that ran through my head at every stage of the interviewing process.

These were not pretty.

They included fears and beliefs about how everyone at big firms must be smarter than I, that they all came from different backgrounds and that they were more familiar with the large firm environment than I was.  I felt there was no way I could realize my goal – or could I?

Did I truly believe all of these things?  Not consciously, no.  But, I would not have felt the level of anxiety in pursuing opportunities to advance if I hadn’t had those doubts.

Doubts can originate from messages that we incorporate – often inadvertently – from influential people in our formative years.  A colleague shared that the prevailing view of her family, always unspoken, was that anyone who had college ambitions and who would eventually leave their small town must think that they were better than everybody else.  She didn’t realize she had even received this message until she observed her family’s behavior once she was in college.  She realized every reference to her college life made her family defensive and aloof. Every time she went up against these deeply rooted messages, her anxiety would surface.

The benefit of writing down all of the negative thoughts I heard running through my head during my own interview process was that I gave them a voice.  It was the voice of the small, insecure part of me that was afraid while heading down a very unfamiliar path without much support.  Instead, I wanted to revisit those negative thoughts from the perspective of my adult, confident and able self, who was qualified to make the move I was reaching for.

I wrote out all of the fears of the insecure part of myself in one column.  In a second column, I wrote a response from the grown-up, confident and able part of myself, so that I could give myself the support I really needed.  It went something like this:

Fear: These people are just different from me.  They are going to feel like I don’t fit in.

Response: Think of all the other times a place felt unfamiliar.  After a while, it will feel familiar and you’ll be just fine.

Response: Staying small to please other people never got anyone anywhere.

Fear: I bet they are mean and angry that I’m wasting their time today.

Response: Most people are good.  If someone is mean, than that is really unprofessional.  I wouldn’t want to work with someone like that anyway.

It is a very helpful exercise to bring out those deep seated insecurities and beliefs that prevent us from moving forward.  The anxiety surfaces when we attempt to challenge those unvoiced beliefs.  The more you give voice to them and the more your adult, able self is able to combat those beliefs, the less anxious you’ll be when pursuing something that is out of your comfort zone.