By Julie Silverbrook • November 06, 2012•Nonprofits and the Public Interest 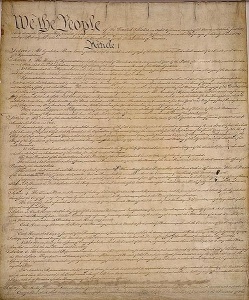 At age 19, while studying political theory at the George Washington University, I began work as an intern at The Constitutional Sources Project (ConSource). If you had asked me then where I would be working five years later, I would not have told you that I would again be at ConSource, only this time as its Executive Director.

My career trajectory is not typical for a recent law graduate nor is it typical within the non-profit sector. How often does an intern become the executive director, period, let alone in five year’s time? Even more unusual, is that I left ConSource as an employee for several years – first, to experience internship programs in all three branches of government and to work with other non-profit organizations, and then to complete my law degree at the William & Mary Law School. Although I no longer filled out W-2 forms and other employment paperwork, I had become a committed member of the ConSource family and continued to serve as a volunteer for the organization.

I even coordinated a unique documentary transcription pilot program at my law school – recruiting my peers to transcribe annotated early drafts of the U.S. Constitution (also known as the Committee of Detail report).  With the expertise I had acquired at ConSource, I was able to guide my law school colleagues as they meticulously transcribed annotated drafts from George Washington, James Madison, James Wilson, and John Dickinson.

As the documentary transcription program came to a close, I realized that my work with ConSource was not yet done.

I dialed my old boss, the Founding President of ConSource, Lorianne Updike Toler, and told her that I wanted to discuss my future with ConSource – a topic we had discussed many times in the past, but that I had delayed deciding on so I could get a genuine sense of my post-law-school-graduation options.

After a series of phone conversations and a late-night cab ride after ConSource’s annual Constitution Day event with leading historian David McCullough, it was decided – my application would be put before the Board of Directors. About a month later, I had another late night conversation, this time with the Chair of ConSource’s Board of Directors, informing me that I had been selected to lead the non-profit as its Executive Director.

And so began my journey…

As I finished up the latter half of my final year of law school, I balanced my duties as Executive Director with my coursework, my position as a senior articles editor on my law journal, and as the director of the successful constitutional literacy program I founded at W&M, Constitutional Conversations. It was a harrowing few months – filled with stress, a cross-country business trip immediately before my final round of law school exams, and weekly drives between Williamsburg, VA and Washington, DC, where ConSource is headquartered. I often found myself distracted from my coursework – choosing instead to work on a project for ConSource. My A-type personality and its corresponding need to achieve at the highest levels within the four walls of my law school came in to direct conflict with my A-type personality and its corresponding need to create and further develop ConSource’s many legal and educational programs.

Even on graduation day, I took a morning call from my Board of Directors and snuck my blackberry under my gown, so I could answer work emails during the graduation ceremony. The literal day after graduation, I started working full time as ConSource’s Executive Director. I had too many plans and now was the time I needed to implement the changes I wanted to make. In my mind, there was quite literally no time for delay, let alone relaxation.

After spending the last several months crafting and re-crafting my vision for the organization, I am now prepared to share my thoughts, experiences, trials and tribulations with law students and young lawyers as I, hopefully, master the art (or, perhaps, science) of Executive Directing. In the months that follow I hope to give you a glimpse of what it is like for a 25-year-old, recent law graduate to run a non-profit organization.

ConSource is a non-partisan 501(c)(3) organization devoted to increasing understanding, facilitating research, and encouraging discussion of the U.S. Constitution by connecting individuals with the documentary history of its creation, ratification, and amendment.

Julie, I am so thrilled to see you sharing your vision, trials, and tribulations with the Ms. JD community!  I think this is going to be a fantastic column and a perfect way for many people to explore other potential avenues to legal practice.  In particular, I hope you will talk about the management issues you face.  I think often, lawyers are not the most effective managers and your experience managing ConSource may be a great way for many of us to learn lessons that we can apply in other areas of practice.  Thanks for being a part of our community!