By Anonymous • December 17, 2008•Sexism, Sexual Harassment, and Other Forms of Discrimination 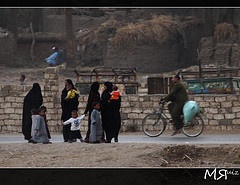 "A recent study by the Egyptian Center for Women's Rights found that 83 percent of Egyptian women and 98 percent of foreign women experience public sexual harassment in [Egypt]..., including explicit comments, groping, men exposing themselves and assault," reports the Los Angeles Times.

A 27-year-old former law student, however, has fought back by pursuing a complaint in a landmark case.  The young woman, who was groped by a truck driver, was urged to file a complaint by her father, documentary filmmaker Noha Rushdi Saleh.  The truck driver was sentenced, in October, to three years of hard labor.

Although women are often discouraged from pursuing such complaints, pressure coming especially from their families, within weeks after the sentence four more sexual harassment complaints had been filed.  This was a significant increase from the zero complaints that had been filed in the years preceding the sentence.