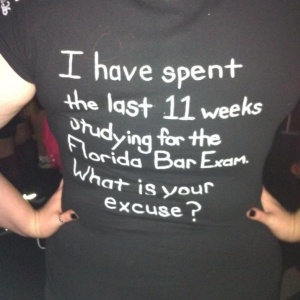 I was one of the fortunate students who took the February Florida Bar Exam. Everyone told us we were going to be the guinea pigs. For weeks we panicked worrying. I hyperventilated in my seat when the bar examiners called start. I frantically paged through the exam.

The new subjects never showed up on the February Florida Bar Exam.

As anyone knows who is facing the Florida Bar Exam, the Board of Bar Examiners decided to add subjects. The subjects are dependency, delinquency, commercial paper (also known as payment systems) and secured transactions.

No, I'm not gloating. But I remember the feeling of sitting in a classroom at Barry University with my head in my hands panicking that I was never going to understand Secured Transactions. But it turned out that I didn't need to know it.

Unfortunately, I highly doubt that the Bar Examiners are going to let another bar administration go without testing the new subjects, or at least one of the new subjects. I've heard people already beginning to panic that they don't know anything about dependency or whichever subject they've declared their devil. After their initial panic, I then hear about how little there is available for them to work with followed by either tears or continued ranting about how they're going to fail.

But here's the thing everyone seems to forget: If you don't have anything to work with regarding the new subjects, what are the odds that someone else has them?

I forgot that key fact as well when I was preparing for the bar. I constantly sat there worried that someone else has more knowledge about Secured Transactions than I did because somehow the universe gave them a study material I don't have. But it's just simply not true.

There simply are no examples out there right now to give you a clue as how Florida will test the new subjects. Now I know someone is going to try and call me out insisting that there are examples: Yes, there are examples of how those subjects are tested- but the examples from OTHER states with DIFFERENT laws and DIFFERENT ways of testing. There are example commercial paper and secured transactions essays but the sad part is that they are from Texas so they are designed to be done in 30 minutes, not Florida's which designs essays to last 60 minutes. Odds are your essays are going to have a lot more issues than the ones in other states and they probably will be coupled with another topic like Property or Torts.

So here's my advice on how to make sure you're ready for the new subjects:

Focus on memorizing. Some people use flashcards, some use outlines. I used a highlighting technique that always worked for me. I highlighted each outline as I read using colors to differentiate definitions from equations and so forth. Anything that wasn't highlighted was then deleted from my computerized version of my outline, I reprinted the new smaller outline, and the process began again until I got that outline as small as it could go.

You need to find some way that you can memorize the black letter laws for Florida. That's going to be key especially since now all the subjects are also fair game for multiple choice.

But, please, don't waste time panicking thinking that someone else has an advantage because they don't. They are just as lost as you are without any guidance because the bar examiners played a joke on those of us who took the February Bar.

You're going to be ok. Just keep working and try your best. That's all anyone can ask of you.