Failure Turned Inside Out: Asking for a Friend 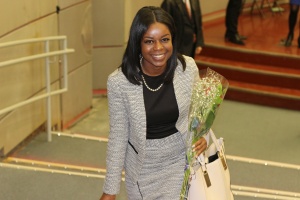 Sometimes the desire to help others is not enough.

Before ending this column, I thought it was important to share my own story with my readers. It was a bit odd being the interviewee, but I pushed myself to answer some of the same questions I have been asking other women during this past year so this journey with you all could come full circle.

For me, becoming a lawyer has always been a means to an end. I knew very early on that it would be the first step to evolving into a diplomat or politician championing the civil and human rights of others. You see, my parents emigrated here to the United States before I was born. So growing up, there was a woman named “Hillary” who I knew was somehow helping them, I just did not completely understand in what capacity. Hillary was in our lives for years! My parents always went off to meetings with Hillary, would send and receive letters from her, and speak to her over the phone. As I got older, I realized that Hillary was my family’s immigration lawyer and she was helping them obtain citizenship. When my grandfather died, Hillary was one of the first calls my parents made so that my dad could weed through the entanglements of the American immigration system and go home to bury his father with dignity. That meant everything- to him and to my entire family. I vowed to myself that when I grew up, I was going to help families the way Hillary had helped mine.

Sometimes the desire to help others is not enough to combat life’s obstacles along the way. I can be transparent enough to admit that from the day that I declared I was going to be an attorney to the day it actually came to fruition, I have faced SO many obstacles. But I think the most gut-wrenching hurdle along my path was when I failed the bar examination.

I think I perceived that experience to be a failure because first, I literally failed what is essentially a pass or fail examination; and second, because it was a reflection of the state of my life at that point. At that juncture, I was losing significant friendships and relationships left and right, receiving weekly eviction notices, eating one meal a day because that is all I could afford, sleeping on couches, negotiating with car mechanics to help me fix my car so I could drive to interviews, struggling with mental and physical health illnesses that I couldn’t address or share because all of that requires health insurance and courage- neither of which I had, and was just utterly depressed. With everything going wrong, I had clung to my impending bar results as my way out of it all. So when I did not pass, I felt as though I had reached the end of my rope. The hunger you have when something that you desire so much has the potential of being ripped from the pages of your story, becomes as physical as any hunger pain for food that you have ever felt…times ten.

I could either continue to settle or get in position with my purpose and shape up.

In the short term, I crumbled, isolated myself, slipped into a deep depression, and shut the few people I had left out. In the long term, I found the woman God called me to be. God, the universe, or both, thought I was significant enough to break my plans. For that I am grateful.

With lots of coaxing, my parents eventually convinced me to come home and start over. During that time, I developed a new game plan for studying for the February exam, attacked my plan with the little bit of fight I had left in me, prayed a lot, and birthed this blog series, “Failure Turned Inside Out.”

The one thing that happens when you isolate yourself is that the silence forces you to face some hard truths and in my case, talk to God about those truths and what to do with them. I was forced to face the reality that I had been settling in a number of areas of my life. I had a decision to make. I could either continue to settle or get in position with my purpose and shape up. One night I was just asking Him how I was supposed to get through all of this and rebuild a life I could be proud of. In that moment, I felt led to write. Writing in something I have had a passion for since I was a kid and I took advantage of whenever I could. But the demands of life and law school had pulled me away from writing for a purpose. I had no idea what I was supposed to write about or in what capacity, but I would soon find out.

After I got the message to write, I received an email from Ms. JD a day or two later. Ms. JD was a website I had just subscribed to literally days before I received my bar exam results. The Board was looking for blog writers for their Writers in Residence Program. Long story short, it was an opportunity to write. I thought to myself, it might be therapeutic or somewhat encouraging for me to speak to women in my field about how they overcame difficulties in their career and write their stories. I would ask, for a friend of course, how they perceived their obstacles and share their stories with other women who may be in a mental purgatory like I was in that season. And as much as I wanted to help others, (that part of my upbringing thankfully was still engrained in me), I desperately needed something to cling to. That is how “Failure Turned Inside Out” began and I began to heal mentally and spiritually.

Practically speaking, I also took some steps to conquer the bar exam- on my own terms this time. I asked for help, got a tutor, invested in Adaptibar to understand the game of the exam, got off of social media indefinitely, tightened up my social circle, medically and spiritually addressed my anxiety and health problems, and my favorite: I traveled both nationally and internationally. All of these things gave me the confidence I needed to attack the exam in a way that I had not the first time around.

There is a level of vulnerability necessary to ask for help.

Although I did not grow up with attorneys or judges who were readily accessible in my family or immediate circle, I was lucky to have amazing helpers along the way. In college, I met some amazing women and men in the legal profession who shared in my passion to use their words to help people. These people were honest with me about the struggles that I might face as a first-generation, woman of color in the profession. They never held back when it came to their own gripes with the profession. But the women in particular reminded me to never show my weakness, but always reach out for help when I needed it. It was helpful advice, but constricting. At some point the two merge don’t they? There is a level of vulnerability necessary to ask for help and some might see this as a weakness. So I hid my struggles with the bar exam until I was forced to speak to women for purposes of my blog. That’s when they started opening up.

From interviewing women and writing this blog, I feel even more strongly that diversity on all levels is vital to the legal profession. Diversity not only in race, gender, ability, or ethnicity, but in experience as well. If I had quit my pursuit of getting my license, I would not be able to be an example to the young interns, paralegals, mentees, and people I work with on a daily basis. My presence in a space that has not historically thrived with people and experiences similar to myself is bigger than me and I understand that.

Give Yourself Permission to Grieve.

If I could give the me back then some poignant advice, it would first be to give herself the permission to grieve. The advice Camille Stewart gave in the second edition of this blog series hit home for me: “grieve and get up.” This resonated with me so much because being stuck at the entry gate of my career was frustrating, but I recognize now that that the young woman then was broken by a lot of different things in her life at that point. She had not given herself the permission to grieve each and every one of those things appropriately. THIS was what was preventing her from getting up.

I would then tell her to look to the future because it is going surpass the limits she was placing on herself at that time. She is going to move to a new city, start her life over, meet knew people, join boards and committees that need her influence, prepare to launch her very own business, advocate for and help people both on and off the job, write more than she thought she was physically able to, and oh- pass that dang bar exam.

Prior to writing this blog series, I did not know where to look to find women in this profession who were willing to be transparent enough to share their struggles and how they overcame them. I constantly got politically correct, monolithic answers. But I thought intently about the women I chose to feature in each and every post this year, knowing that their testimonies would not only help a friend, but me as well. I admire each and every one of them. And I admire and appreciate every one of you who has taken the time to read, comment, share, and send me private messages about how this series has healed you in some form or fashion. Thank you all. And thank you Ms. JD for the space and opportunity to share my healing regime with the world.