Failure Turned Inside Out: Book Review of Justice Sonia Sotomayor’s “My Beloved World” 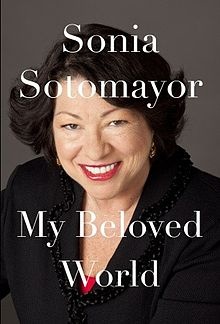 Years on the Supreme Court Bench: 7

Sometimes changing seasons can simply be overwhelming as you wait to finally pivot into that next phase.

Before you jump out of your seat with excitement: No, I did not have the opportunity to sit down with Justice Sotomayor for this piece. However, I did get the chance to pick her brain a bit by way of her 2013 book entitled “My Beloved World.”

Justice Sonia Sotomayor’s “My Beloved World” has been on my list of books to read for ages. But as with most things in life, something else always seemed to come up and prevent me from sitting down and reading this particular memoir. That was until just a couple of weeks ago when my life changed pretty drastically. For any of my spiritually in-tune readers, a season biblically refers to “that which comes or arrives, and in this general sense, is synonymous with time.” But you don’t have to be well versed in Biblical teachings to understand that we all go through many seasons throughout the duration of our lives.

I personally had reached what I refer to as a dead zone in almost every aspect of my life: my personal life, my professional life, my health, my financial life…you name it—complete and utter dead zone. And I had been in this zone or season for quite some time. Almost a year to be exact. That is until a few weeks ago. That is when doors started opening for me left and right. What a blessing right?? Wrong. Because you know when you start to get the sniffles somewhere in between April showers bringing May flowers because the pollen count is out of this world? Or you feel sweaty and restless in those dog days of summer well before the first leaves start to fall off of the trees? Sometimes changing seasons can simply be overwhelming as you wait to finally pivot into that next phase. That is exactly what I was feeling. I felt stuck in between being low (literally and figuratively speaking here) and yet slightly unworthy to be pulled upwards to this new season of opportunity because I had honestly started to pride myself in the struggle that had become all too familiar in my life.

"People who live in difficult circumstances need to know that happy endings are possible."

So in come Justice Sonia Sotomayor and “My Beloved World.” From the little I knew about the Supreme Court justice, I had gathered that she, like me, had come from humble beginnings. And in this turning point in my life, that was enough parallelism for me to finally sit down and read her book. If I could somehow gleam from this woman how I was supposed to rationalize the struggles I had faced with the good fortune that was now literally tumbling down from the heavens, I would be so appreciative! So I picked up the book; and I am so glad that I did.

From the outset, Justice Sotomayor acknowledges children at a juvenile conference on diabetes who pellet her with questions about whether it ever gets easier to live with diabetes, how to cope with the loss of a parent at a young age, what it is like to live between two worlds as a minority, and even whether she has ever faced discrimination. Justice Sotomayor’s underlying response to these lofty questions, which also serves as a theme throughout the book, is exactly what I needed: “The challenges I have faced—among them material poverty, chronic illness, and being raised by a single mother—are not uncommon, but neither have kept me from uncommon achievements. For many it is a source of hope to see someone realize her dreams while bearing such burdens…How is it that adversity has spurred me on instead of knocking me down? What are the sources of my own hope and optimism? Most essentially, my purpose in writing is to make my hopeful example accessible. People who live in difficult circumstances need to know that happy endings are possible.”

"I probably wasn't going to live as long as most people...so I couldn't afford to waste time."

The Supreme Court justice is admirably honest and vivid in her memoir as she discusses everything from learning how to inject herself with insulin at the tender age of seven, enduring the constant arguing between her parents until her father’s untimely death when she was nine, to not being able to fully grasp the intensity of her father’s alcoholism while he was alive or her mother’s depression following his death, and simply growing up in the Bronx as a young Puerto Rican girl. The striking imagery she uses in detailing these accounts comforts me in the sense that it’s encouraging to know that she acknowledges these struggles as stepping-stones to who she is today.

While many have respected Justice Sotomayor throughout her career as a valiant and talented litigator and orator, she is honest about it taking time to find her voice. When she was first diagnosed with juvenile diabetes, it was practically a death sentence in those times and her family felt the weight of that sentence. Young Sonia came to the following conclusion, “I probably wasn’t going to live as long as most people, I figured. So I couldn’t afford to waste time.” This is when she decided that she would become a lawyer like Perry Mason, or even better—a judge who always seemed to have the last say in the episodes of the Perry Mason show. She then discovered that if she was going to become a lawyer or a judge, she “had to learn how to speak persuasively and confidently in front of an audience.” To hone this skill, Justice Sotomayor began raising her hand to volunteer to read scripture in her religion course, which many girls did not do at that time. And to overcome the nerves associated with looking into a crowd, she stared at her classmates’ foreheads. (Please don’t tell opposing counsel that I still do this to get through arguments!) By the time she was a senior in high school, Justice Sotomayor began winning speech competitions. She effectively moved from a season of envisioning herself as a lawyer or judge to putting in the work to hone her craft in order to materialize her vision.

“My Beloved World” also spotlights some of the key players of Justice Sotomayor’s support team. Her depiction of her mother’s unwavering and genuine support of her children was extremely endearing. “’I don’t care what grade you get, just study. No me importa si trabajan lavando baños. Lo importante es hacerlo bien.’ I don’t care if you clean toilets, just do it well. Achievement was all very well, but it was the process, not the goal, that was most important.” This really resonated with me because while moving from one season to the next can be daunting, recognizing that moving from one phase to another does not have to mean that we forget the process associated with what it took to get there.

Whether you are at the tail end or onset of a season, Justice Sonia Sotomayor’s “My Beloved World” is a great read for those of us who are still trying to learn how to balance what was with what is now ahead of us. Her ability to pull from key aspects of her life that occurred all well before we knew her as one of the most important women in our modern legal system is a poignant reminder that from one season to the next, it’s all a part of the journey.

Pick up your copy of the book from your local library or purchase here!