Failure Turned Inside Out: Risk It All- The Anita Hill Story & Workplace Sexual Harassment

By Patricia Jjemba • November 04, 2017•Ms. JD,  Writers in Residence,  Careers,  Firms and the Private Sector,  Legal Academia,  Nonprofits and the Public Interest,  Politics and Government,  Other Career Issues, •Issues,  Balancing Private and Professional Life,  Mentoring and Networking,  Sexism, Sexual Harassment, and Other Forms of Discrimination,  Women and Law in the Media 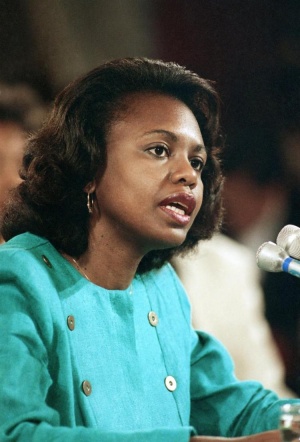 This kind of behavior is what makes it extremely difficult to speak out against workplace harassment and assault.

To date, more than sixty women in the film and production industry have accused acclaimed Hollywood producer Harvey Weinstein of sexual harassment and assault. At least two of these accusations have resulted in law enforcement officials and prosecutors opening criminal investigations that may lead to his indictment on rape and sexual assault charges. And while many may be interested in the salacious downfall of Weinstein for their own diabolical interests, there are those of us who appreciate the important conversations that have stemmed from his exposure. The discussion about the existence of sexual harassment and assault in the workplace is, in my opinion, the most important in this mess of a scandal. These women’s ability to take on sexual harassment in work settings has turned our failure or neglect of the issue on its head.

Like many sexual perpetrators, Weinstein used his power and position as a producer and decision-maker as a means to exert power over his victims. This kind of behavior is what makes it extremely difficult to speak out against workplace harassment and assault. Men and women who step forward against employers or former employers risk their careers, personal and professional relationships, and even credibility. Taking on a media mogul is presumably extremely difficult, but taking on a Supreme Court nominee bears its own weight as well. Nonetheless, Anita Hill took on then Supreme Court nominee Clarence Thomas when she testified in front of Congress as to his workplace indiscretions.

In 1991, Justice Thurgood Marshall decided to step down from the Supreme Court and President Ronald Reagan seized the opportunity to nominate a conservative replacement to the bench. Clarence Thomas was a conservative, forty-three year old, African American lawyer and seemingly a suitable replacement in President Reagan’s eyes. The Senate Judiciary Committee held confirmation hearings, but could not clench a majority vote for or against his nomination. The matter then went before the Senate. It was during the Senate hearings that Ms. Hill’s allegations came to light.

A law professor at the University of Oklahoma and esteemed young lawyer herself, Anita Hill had worked for Clarence Thomas during her time at the Department of Education’s Office for Civil Rights from 1981-1982 and again at the Equal Employment Opportunity Commission (EEOC) from 1982-1983. According to Ms. Hill, it was during this time as a budding attorney that she encountered Thomas’s vulgar sexual discussions, repeated attempts to take her out on dates, and admission that if anyone were ever to find out about his behavior, his career would be in fact be ruined.

In a room full of senators, political officials, and live cameras for the eyes of the American people, Ms. Hill recounted specific instances that amounted to sexual harassment, inappropriateness, and quite frankly, poor taste inside or outside of the workplace. “He spoke about acts that he had seen in pornographic films involving such matters as women having sex with animals, and films showing group sex or rape scenes,” she claimed. “On several occasions Thomas told me graphically of his own sexual prowess.” She further alleged, “He referred to the size of his penis as being larger than normal.” Even more shocking, in describing an incident with a Coke bottle, Ms. Hill went on to say that Thomas had asked, “Who has put pubic hair on my Coke?”

Anita Hill sat there for hours, even-keeled and measured, describing in agonizing detail the indiscretions of her former supervisor.

I cannot imagine how I would have reacted to some of these comments or interactions in my own life, let alone how I would have maintained my composure when recounting them in front of millions of people. But somehow, Anita Hill sat there for hours, even-keeled and measured, describing in agonizing detail the indiscretions of her former supervisor. And when she finished, she then endured the Senators’ questions- some sympathetic to her account, others primly dressed up in political guise and rhetoric, but a few blatant attacks on her testimony and character.

Why on earth would Ms. Hill follow Thomas from the Department of Education to the EEOC if she had in fact suffered such harassment, they asked. They pressed her further. If the abuse had been so traumatic, why would she decide to be cordial and keep in touch with Thomas years after she left the EEOC and began teaching? And would a real victim of sexual harassment have given Thomas a ride from the airport at the suggestion of her university’s dean? This kind of victim shaming, blaming, and attempt to discredit is exactly why men and women who endure sexual harassment and assault fail to come forward.

Putting aside for a moment the direct insensitivity towards a potential victim that these senators exhibited, we have to acknowledge that harassment in the professional setting encompasses varying levels of complexities that have to be considered. The decisions we make as it relates to our career can in many ways become intertwined with the ones we make about our safety and wellbeing as an individual; this is almost unlike any other aspect of our lives. In deciding to speak up, victims of workplace harassment, therefore, have to weigh the wrongness of their perpetrator’s actions with the correctness of their legitimate desire to excel professionally. The truth is that speaking out against a powerful person in your profession unfortunately makes a you vulnerable to sabotage in your career.

I came forward and did what I felt that I had an obligation to do.

Whether you believe her account or not, Anita Hill’s decision to speak up against her former supervisor, a soon-to-be United States Supreme Court Justice, Clarence Thomas, was lofty and courageous. She recognized and acknowledged the risks associated with her decision. “I have nothing to gain here. This has been disruptive of my life, and I’ve taken a number of personal risks. I have not gained anything except knowing that I came forward and did what I felt that I had an obligation to do. That was to tell the truth.”