Failure Turned Inside Out: The Not So Gentle Ladies of the United States Congress

By Patricia Jjemba • July 31, 2017•Writers in Residence,  Careers,  Nonprofits and the Public Interest,  Politics and Government,  Other Career Issues,  Law School,  Choosing a Career and Landing a Job,  Issues, •Balancing Private and Professional Life,  Mentoring and Networking,  Women and Law in the Media,  Other Issues 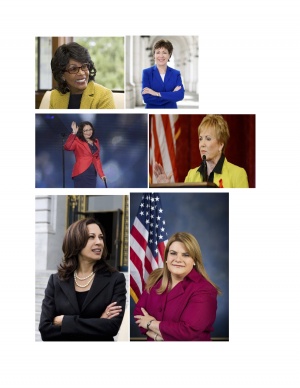 The women that serve daily on behalf of the American people are fierce trailblazers in their own right.

As a means to seemingly promote gender equality, there is a new term that has been floating around the United States Congress. You see, as of late congressional members have been referring to their female House representatives and Senate members as “gentle-ladies.” (Example: The gentle lady from California will now address the House.)

Now whatever your personal opinion is on the alluring appeal (or lack there of) of the term itself, there is one thing I think that we can all come to an agreement on. The singular point of agreement is that the women of the United States Congress are anything BUT gentle. The women that serve daily on behalf of the American people are fierce trailblazers in their own right. In this month’s article, I highlight some of these women, who at different points in their lives became fed up with the failed systems or injustices around them and turned their frustration inside out by becoming elected officials.

Fondly referred to as “Auntie Maxine,” by her millennial supporters, Representative Maxine Waters is definitely one you want fighting on your behalf.  Born in 1938 in St. Louis, Missouri, Representative Waters moved to Los Angeles, California in 1961. Her assent to the political arena occurred organically following her work in the public sector. Following the Watts race riots in 1965, Representative Waters launched a career committed to public service. She served as a teacher and volunteer coordinator for the Head Start program, which is a national non-profit organization that stands on a “model of support for the whole child, family and the community” and works for policy and institutional changes to that end.

Working hand-in-hand with parents of Head Start to push the federal government for more funding, Representative Waters ultimately became inspired to join politics in a more formal capacity. She was elected to the California Assembly in 1976 and eventually the House of Representatives in 1990.

While she has made recent headlines for her stark criticism of the current administration, make no mistake- Representative Waters is not new to the game. In her 37 years of service, she has helped legislate issues related to the prohibition of police strip searches for nonviolent misdemeanors, affirmative action, and the nation’s first statewide Child Abuse Prevention Training Program; founded organizations such as the Black Women’s Forum, a nonprofit comprised of more than 1,200 African American women in the Los Angeles area, and Project Build, a program supporting the youth in Los Angeles housing developments with job training and placement; and led health initiatives such as the Minority AIDS Initiative.

Most recently, “Auntie Maxine” has offered us all with an example of what it means to be a fearless dissenter. Her routine calls for impeachment, urge for investigation of high-level officials’ ties with Russia, and reclaiming of her time as a means to stop witnesses’ attempts to curtail her questions have left her far from unscathed by her critics. From being accused of inciting violence to being deduced to a James Brown wig, Representative Waters's response to her pundits? “I am a strong black woman and I cannot be intimidated.”

Senator Susan Collins has her parents to thank for exposing her to the political system at an early age. Both her mother and father served as mayor for their city of Caribou, Maine and her father also went on to become a member of the Maine State Senate. She learned from an early age that one of the best ways to effectuate change was by becoming an elected official. Senator Collins herself was a part of the U.S. Senate Youth Program and even worked as a legislative assistant to Maine State Representative William S. Cohen.

Senator Collins’s political career progressed as she ran for a seat in the United States Senate in 1996. She was elected to the seat and ultimately replaced her former boss Representative William Cohen. She has been known to work across the aisle as a means to provide the best solutions to problems of the American people. Most notably, she has gone against the grain of party trends by supporting marriage equality, abortion rights and gun control.

Recently Senator Collins has been in the headlines for being one of only three Republicans who voted against the repeal of the infamous Affordable Care Act to the surprise and dismay of her party members. Unwavering on her stance to vote against what has been termed the “skinny repeal,” Senator Collins has instead reminded her fellow congressional members that “the ball is in our court.” But Senator Collins’s vote should not have come as a surprise considering her longstanding commitment to healthcare. She founded the Senate Diabetes Caucus in 1997 and has spearheaded efforts to heavily increase federal funding for diabetes research. She also served as Senate co-chair for the Congressional Task Force on Alzheimer’s Disease. Exercising her right to vote against legislation such as the “skinny repeal” ultimately fell squarely in line with Senator Collins’s history of effectively using the political system.

Senator Tammy Duckworth was born in Bangkok, Thailand and spent the early years of her life living abroad. Born to a Chinese mother and British father, it was her father’s line of work with the United Nations that afforded her family the opportunity to live in Thailand, Indonesia, Singapore, Cambodia, and eventually Hawaii. Her international exposure must have had an influence on her, given that she decided to earn a Master’s degree in international affairs from George Washington University and a Ph.D. in political science from Northern Illinois University.

While attending Northern Illinois University, Senator Duckworth enlisted with the Illinois Army National Guard and became a trained Blackhawk pilot. She was deployed to serve in Iraq and flew in Operation Iraqi Freedom. While heroically serving in Iraq, Senator Duckworth lost both of her legs and function in her right arm when a rocket-propelled grenade struck her helicopter. She was awarded the Purple Heart for her service and sacrifice.

Senator Duckworth is undoubtedly proud of her service for her country, but has expressed great disappointment with U.S. policy makers for “failing to match the sacrifices of American soldiers.” As she was recovering at Walter Reed Army Medical Center, Senator Duckworth began her mission for advocacy and activism. She advocated for the improvement of medical care for wounded veterans and family members. This eventually led her to pursuing a political career.

Senator Duckworth became the director of the Illinois Department of Veterans’ Affairs; was appointed by President Barack Obama as Assistant Secretary in the U.S. Department of Veterans Affairs and ran and won a seat in the House of Representatives in 2012. Senator Duckworth became the first Asian-American congresswomen from Illinois and the first disabled female veteran to hold a seat in the House of Representatives. She has continued her activism for war veterans as an elected official of the United States Senate following her 2016 win of the esteemed seat.

Representative Kay Granger’s reputation, both inside and outside of the federal political arena, is one riddled with trailblazing. Raised in Fort Worth, Texas, Representative Granger began a career devoted to service by majoring in education at Texas Wesleyan University. She went on to become a high school journalism and English teacher. Representative Granger also established herself as a successful small business owner, operating an insurance company for more than twenty years before she pursued a career in politics. Through her diligent work as a small local business owner, she became the first woman inducted into the Fort Worth Business Hall of Fame.

Urging to put her experience teaching and owning a business to use on a grander scale, Representative Granger ran for mayor of Fort Worth and was elected to the position in 1991. She again claimed the trailblazer title, as she was the first woman elected mayor of the city. Known for her tough stance on crime (she reduced crime by 49% during her tenure as mayor), Representative Granger soon made her move for a seat in the House of Representatives, which she won in 1997. She has held the position for her district ever since and has become known by her colleagues as one who focuses on defense, foreign policy, and the unending support of men and women in military service. From her service in the education system, to the business sector, and eventually political stage, Representative Granger’s rise to the House of Representatives certainly exhibits an amplifying drive to reach a wider range of Americans by engaging in various levels of service.

Born in Oakland, CA, Senator Kamala Harris’s passion for justice was in large part framed by her upbringing. The product of an Indian-born mother and Jamaican father, Senator Harris’s first introduction to civil rights began before she could even walk. Her parents often wheeled her, stroller and all, to civil rights marches. And while her parents later divorced, Senator Harris’s mother continued to raise her and her sister Maya in a way that would solidify their understanding of both the American dream and the value of being a black woman in America. Senator Harris’s mother did this by choosing to raise her daughters in a black community and exposing them to members of her social circle who were very much so plugged into black political consciousness. Senator Harris spoke specifically about the American dream at the 2012 Democratic National convention, stating that, “It belongs to little girls who have the joy of watching their mother, like I did, buy her first home.”

Senator Harris used her rearing as a foundation to galvanize her commitment to justice and public service. And while she supported external actors’ fight for justice, she also recognized the importance of fostering change from within the system. After attending Howard University, she earned a law degree from the University of California, Hastings College of Law and cultivated a successful career as a prosecutor. She went on to set inspiring precedent such as becoming the first African American and woman to be elected as Attorney General for the state of California in 2010 and second African American woman to ever be elected to the United States Congress in 2016.

While there have been rumblings of a 2020 presidential run, Senator Harris has remained poised and committed to the issues that she championed during her time as a prosecutor; which include criminal justice reform, technology and data-driven policing to support law enforcement officers, reduction of violent crimes, and recidivism reduction and reentry support for convicts. Senator Harris is a great example of effectively using the system to address the issues that persistently plague the communities we come from.

For those of us who aspire to expand our civic engagement to the political scale, but worry about not being old enough to enter the ring, let Representative Jenniffer Gonzalez-Colon’s testimony be an inspiration. She is a proud product of the public school education system, having attended Puerto Rican public schools for her elementary, middle, and high school education. Her parents were also both public servants.

Representative Gonzalez-Colon is well known for developing and standing firm in her own judgment. During Puerto Rico’s fiscal disaster, she became the first public official to protest the extension of the Federal Bankruptcy Code’s Chapter 9 as a singular solution to the deficit crisis. Her colleagues soon later adopted her sentiments. She has effectively served as Puerto Rico’s sole representative in Congress.