Failure Turned Inside Out: The Path Most Traveled, Usually Isn’t Mine 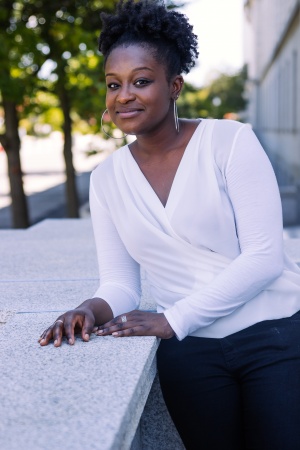 Professional Title: Exiting Senior Policy Advisor for Cyber, Infrastructure & Resilience at the Department of Homeland Security in the Obama Administration

Extra Tid Bit: “The truth is that our finest moments are most likely to occur when we are feeling deeply uncomfortable, unhappy, or unfulfilled. For it is only in such moments, propelled by our discomfort, that we are likely to step out of our ruts and start searching for different ways or truer answers.” –M. Scott Peck

She decided she had to become her own best advocate.

The desire to enter the legal profession arises at different points in all of our lives. Making her parents sign a contract every time they made a promise to her, Camille Stewart’s desire to become an attorney clearly came about early on. Her overall interest in lawyers’ distinct ability to use the law to shape an argument in their favor, aptitude to balance various passions, and capacity to command the respect of those around them are some of the characteristics that led to and have ultimately kept her in the practice of law.

But just as any other legal professional, Camille faced some hurdles along the way to where she is now. Camille’s story is one I can absolutely relate to, given the parallels in our personal narratives. Always lingering in the background was the thought that she was at a disadvantage and lacked the necessary connections or frame of reference in the legal realm because she, like me, was the child of immigrant parents. The most notable struggle, however, was her experience with the dreaded LSAT (Law School Admission Test). Having scored well on numerous practice tests, she was devastated when her actual score was not what she had hoped. Things began to look extremely bleak when her trusted pre-law advisor then led her to look primarily into Tier 3 schools or defer, “which was okay, but was NOT the plan I had for my life.” In that moment, Camille said she felt as if a person that she trusted so much, her advisor, had suddenly lost faith in her and her abilities. But it was also in this moment, that the transformation into a legal professional began to take form. She decided she had to become her own best advocate.

In preparing her law school application materials, Camille ensured that her LSAT score would not become the one piece of a bigger picture that would alter her trajectory. Instead, she wanted to make sure that admissions counselors across the country received the most accurate picture of who she was as a person, student, and evolving legal professional. She went for it and ultimately was accepted into some of the best schools in the country. Camille ended up at American University Washington College of Law and the rest is history. When I asked her what she learned from this experience, she thought for a second and said, “Sometimes people have the purest of intentions. But it’s important to always filter their advice against the lens of what you want for yourself so that you’re comfortable in the place where you land.” And while scoring lower than she would have hoped on the LSAT was a failure in her eyes, she recognized that the biggest failure would have been letting others dictate her path for her.

"You will end up exactly where you're supposed to be."

When we dug deeper into the idea of filtering advice from others, Camille harped on her faith as well as her ingenuity. “Ultimately, heed advice, but filter it. Consider the conversations you’ve had with God about what He has for you and use that to help you filter out the advice of trusted advisors and you will end up exactly where you're supposed to. Take comfort in that, trust that. I realized that I can’t be put in a box. That is particularly true in my career. The path most traveled, usually isn’t mine. I bring my own experience, expertise, and assets to my work and my positions. My job is to communicate those things and once I’ve done that, I usually get where I need to be. An important part of advocating for yourself is controlling your personal and professional narrative.”

Soon we landed on the topic of Camille’s thoughts about whether or not women in the law experience failure differently than men. “Yes! We have a smaller margin of error as women, especially women of color.” She went on to highlight some of the inherit biases people are ignorant to in general. For example, the simple fact that it is easier for a male superior to take a man to a basketball game or bar and have a casual conversation, that may be uncomfortable or even inappropriate with a member of the opposite sex, and then bond or create a mentor-mentee relationship. It's natural and easy and nothing is wrong with it, but this may not be the same way male employers connect with women. “We should seek other commonalities, like education, career goals, or hobbies, that allow other relationships to form that we wouldn’t otherwise have the opportunity to have. And employers should also create constructs like mentorship programs or interest groups to encourage new opportunities for connection and mentorship.” The expansion of our circles would likely lead to better insight as to how men and women throughout the profession overcome setbacks and "climb the ladder".

"Grieve and get up."

So what advice would Camille have for any other young woman enduring her own failure right now? “Grieve and get up.” She emphasized that it is okay to be sad that you did not hit the mark. It’s even okay to take a moment. But then you have to figure out what the next steps are and forge ahead. “I’m a big believer of all things working together for your good. When I got the Presidential appointment, I received the offer 9-10 months before I actually started. I even started looking for other opportunities because I was worried that it wasn’t going to happen for me. Now I'm grateful for the wait, the time I finally came in was the most optimal and allowed me to do my best work. These times [of uncertainty] open the door for something much better to come through. I try to remind myself of this in my moments of discouragement.” Camille went on to encourage those of us entering the legal world to be agile about our career and its progression. Be open to it changing and pivoting. Don’t be afraid to ask, network, and put in the extra work to make the connection because it will likely bear fruit. And finally, be your own best advocate as you forge your own path.

***Since the interview Camille has announced she will join Deloitte’s Cyber Risk Team. To hear more from Camille, follow her on Twitter @CamilleEsq.

To learn more about the mission behind "Failure turned inside out" click here and be sure to check out all the other great blog series from ms. jd writers in resiidence contributors.