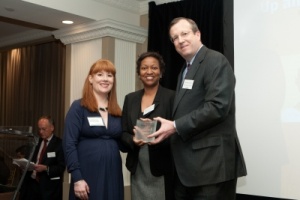 Last Thursday night Chambers USA, well known for their extensive legal research and rankings of law firms and individual lawyers, hosted its first Women in Law Awards.  The event was a hit; packed to the brim with both distinguished attorneys and rising stars; female and male, from all around the country.  An air of charged excitement permeated the room as people waited to cheer on the nominees.  Perhaps the feeling can be partially attributed to the mystery surrounding the event as the first of its kind or the enjoyment of celebrating with respected colleagues, but was there another cause for excitement?

Absolutely.  Because in addition to recognizing top attorneys in each major field of private practice, the Women in Law awards also recognized an up-and-coming attorney in each individual practice area.  As a hardworking associate, being nominated for an award publicly recognizing your blood, sweat, and tears is a validation of your commitment to your firm and clients, and the quality of your work.  But this isn’t just valuable for the nominees and winners themselves, it is an important innovation for the private legal sector as a whole for one reason: attrition.

Although in the past few decades women have come a long way towards equality in the legal field, there is a still a significant gender gap that grows larger at more advanced stages of practice.  According to Catalyst’s Women in Law in the U.S. report published last month, the proportion of female graduates from law school has been almost equal for several years, as is the proportion entering firms as first-year associates.  However, by the seventh year, the percentage of female associates drops to 44%.  The percentage of non-equity partners drops to 25% and percentage of equity partners drops to 15%.  The numbers are moving, but at a glacial pace.  Moreover, these differences are felt in compensation as well, with equity partners making only 85% of what their male counterparts bring home.  There is clearly still a long way to go towards parity.

The road forward is unclear, but what is clear is that more needs to be done not only to adjust gender bias itself, but to publicly acknowledge the value of female attorneys at the associate level, thus creating an attractive and positive environment as their careers progress. As Chambers editor Catherine McGregor noted in her opening remarks, Chambers focused on the up-and-coming category to encourage young female lawyers at a time in their careers when so many choose to leave firm life.  As we move forward, we need to continue to recognize women at every stage in their career.