First Generation Success Story: What Is This “LSAT” Thing? 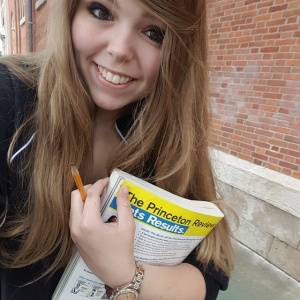 So I made the tough decision to go to law school which was half the battle. In order to get into a school I just need to fill out an application and hope for the best, right? As a first generation student, I had no clue what I needed to do in order to get into law school. Obviously, I knew I needed to finish my bachelor’s degree and get good grades, but I had no idea what else was involved. Unfortunately, I did not have anyone to turn to ask these pressing questions. What was a young law school hopeful to do? Well, I scoured the interwebs, blogs, and law school websites to find the answers.

In my research, I discovered I needed to take a special standardized test called the Law School Admission Test (LSAT). This test is a ‘half-day exam’ that consists of five 35-minute multiple-choice sections and one 35-minute writing sample section. While you are required to take all five sections plus the writing sample, only four sections contribute towards the overall score. The multiple-choice sections are broken into three different categories: reading comprehension, analytical reasoning, and logical reasoning. The exam is scored and you are given a score between 120 and 180. This number will make or break your admission, even if you have good grades.

As a futurist and general go-getter, I wanted to take the LSAT before my senior year of undergraduate and before I decided on what schools to apply for. However, I knew that I had a lot of preparation to do before I felt comfortable taking the exam. Unlike some of my peers, I could not afford an LSAT prep course so I had to figure out self-study tactics that would help me succeed. I purchased a few prep books and taught myself everything I needed to know about the LSAT. I also purchased some released prior LSAT exams. Then I practiced, practiced, practiced. I tried to make my practice sessions as close to realistic as I could, so I set timers and did not look over the exam questions before beginning the “test”. After I felt better about the test, I signed up to take the LSAT.

I actually took the LSAT a couple of times but I will never forget the first day I took the LSAT. For the week prior to the exam, I had been petrified that I would fail and was anxious about what to expect. I read over the rules and guidelines 10 times and triple checked my bag to ensure I had everything I needed for the test. I took the exam in the summer before my senior semester of undergraduate and my testing location was in Detroit, an hour away from my hometown. I left 3 hours early and spent a half hour trying to figure out where to park. As I still had an hour before I needed to report for check-in, I walked in downtown Detroit, found a Tim Hortons, and got myself my favorite ice capp. I felt nervous but I knew I could do it. I headed back to the testing location, watched the time fly by and finished taking the LSAT. Relief overwhelmed me and I headed home to sleep for the next several hours. When I received my score, I was surprised I did so well and happy to know I would make it into law school.

So that’s how I studied for and survived the LSAT.  I still had a lot more on my journey to law school, however I was able to tackle a major step in applying. With the LSAT in my rearview mirror, my next step was deciding what schools I should apply to.