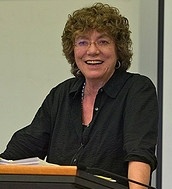 From the very beginning, Professor Barbara Babcock was a champion for Ms. JD, serving in vital roles at the first two annual conferences and providing guidance to Ms. JD's Founders. It is with great pleasure we republish her guest post from 2007.

I am honored to be the first of the first women to speak in this space. My major first was professor at Stanford Law School—which has led in turn to associate firsts (to gain tenure, hold an endowed chair, be an Emerita).

We first women are a vanishing breed in the legal profession –soon all the first spots will be occupied. Soon too in legal time (though not in my lifetime), we will reach nirvana when the sex of the person who wrote the brief, ran the agency, argued the case or taught the class is no longer a matter of notice or comment.

But until that great day –while many of us first women are still around—let us speak to you from the vanguard. I start from the mantra of the movement when I joined it: “the personal is political.” Sometimes I think feminists, with our emphasis on choice, forget that no decision is entirely an individual one –the quality of other lives depends on what we do with ours. At least it is true now that the personal is political despite the astounding progress of women in the law.

My own career mirrors that progress. In 1963, I graduated from Yale Law School without ever being taught by a woman or spending a minute in any class on women’s position in the legal profession, or indeed anywhere else. We women were a tiny band—less than four percent of the nation’s law students. Upon graduation, we faced open and rank discrimination.

Judges of incandescent liberal credentials declared themselves uneasy about employing female clerks (they liked to work in their shirt-sleeves; to tell dirty jokes; to stay late at night; to do all three of these things at once). Law firms were doubtful about our staying power and intellectual drive. Civil litigation was considered too demanding and criminal practice too demeaning for women. No one even mentioned the possibility of corporate practice.

I managed to clerk, however, for the first federal circuit judge to hire a woman law clerk (not me). Judge Henry Edgerton was a senior judge on the D.C. Circuit when I clerked. A man with my record would have clerked for a younger, more active judge—and missed a major mentoring experience. I still live on what I learned from that brilliant old man. There is a lesson here—number one—about silver linings. Look for them behind the discrimination and disappointments: they are almost always there.

After clerking, I practiced in a criminal defense firm and then moved to a public agency that ultimately became the Public Defender Service for the District of Columbia, and I became its first director. So far this is not the usual career path for a law professor. It was not the murder cases I defended, but the women’s movement I joined– that brought me to Stanford.

In the sixties, like all good liberals, I was deeply sympathetic with the civil rights movement, and I thought I was also attuned to its goals. But I was genuinely startled when women’s rights were added to the agenda, and females started flocking to law school. I now realize that this is what women do when we begin a new phase of the movement: we become lawyers.

The percentage of women students in law school rose from four to nearly twenty percent in less than a decade. But the law schools were not ready—not ready to make them welcome, much less to teach them what they needed to know. Many law schools had never hired a woman professor; none had any significant female presence. In 1972, I had the sense to see a window opening and I knew it would not be open for long—I leaped through, leaving my home, the work I loved, my family and my close friends. Lesson Two: Affirmative action is not easy for anyone!

For five years I was the only woman on the regular faculty at Stanford. Then I took a leave to join the Carter administration as Assistant Attorney General for the Civil Division. I was often asked what it “felt like to get my job because I was a woman.” I developed a stock answer: “It’s far better than not getting it because I’m a woman.” That is lesson number three—stand proudly on the shoulders of the women who went before you. Remember that it is how you do the job—not how you got it—that counts.

In 2004, I became Emerita on a faculty that is almost a third female in a school where women are fifty percent of the total students. Women’s issues are everywhere in the curriculum, and the law itself—both in doctrine and theory—has changed almost overnight. Now we have come to a new place, the next great move lies before us –what to do with our numbers, our training, what to make of what we have achieved.

Some of the answers lie in our history, in the lives of the women who preceded us. I am writing the biography of Clara Foltz, first woman lawyer on the Pacific coast, inventor of the public defender; I also teach a seminar on women’s legal history in which the students write about other pioneer women lawyers.

Our work has shown us first that our forerunners were feminists—they put women’s concerns at the center of what they did. We have learned also about the need for male allies. No women have succeeded in the law so far without them. The first generations of women lawyers shared something else: a vision. They believed that the entry of women into the legal profession would change it forever and for the better. Now is the moment to enact that vision –to start the real revolution, extending far beyond numbers, integration and the quest for formal equality.

We must now force the profession on every level truly to accommodate the lives of women. As simple as that, as revolutionary. We must change the workplace built on the ten-hour day, the six-day week, an atmosphere of extreme hierarchy, constant testing, and all-out competition—in which little time remains for family and communal life, pleasure, or pro bono publico.

The skeptic might say: “Why now? Women have been lawyers for a hundred-plus years without making much of an impression on practice. What is so different today?”

First, timing is the key; the profession is open to change now, as never before. Lawyers, though never popular, have hit an all-time low in public esteem. Books and bar speeches, articles, and valedictories abound on the subjects of failing faith and lost lawyers. Our learned profession has become a bottom-line business and public dissatisfaction mingles with agonized self-criticism about the meaning of a life in the law.

The male-created and male-centered model is under an unprecedented attack. Add to this timing the sheer numbers of women and their male allies—in the hundreds of thousands now—and the scene is set for revolutionary change. Change for women lawyers; change for all women.

Law is where we always start.