Forget the Linen Closet: Balancing Family with Your Legal Career 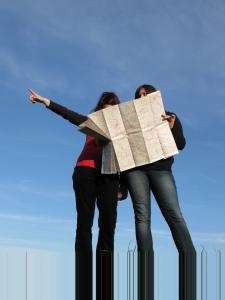 While we may feel like we're the first to struggle with balancing a legal career and a family, it's helpful to look around and realize that scores of strong women have blazed the trail and have done the hardest work of mapping the territory so that we would have a well-worn path to make our journeys a little easier.  Choose Your Heroes Wisely...

My mother once told me about a commercial from the 80's that featured a beautiful woman who enters her house carrying a briefcase and wearing a tailored suit.  She proceeds to put down her briefcase, let down her hair, step into the kitchen and prepare an amazing gourmet meal for her family. The tagline was, "I can bring home the bacon and cook it, too."

Choosing a fantasy or having some vague, idealized version of yourself as your hero can spell trouble and stress, because you will constantly be falling short of your own expectations - or those that you feel others have placed on you.     Look for a Real Hero...

There are countless real-life women heroes to choose from. For example, Justice Sandra Day O'Connor, the first woman on the U.S. Supreme Court, raised three sons. Justice Pamela Minzner, the first woman chief justice of the New Mexico Supreme Court, raised two sons. Michelle Obama, the First Lady, Princeton Graduate, and Harvard Lawyer, has two daughters.  Most of my female law professors also had children - one even had three-year-old twin daughters.  Justice Ruth Bader Ginsburg raised two children. She cared for a newborn daughter and her husband, during his bout with cancer, all while attending .

From the outside, these women look like the woman from the 80's commercial: they have it all figured out, they have successful careers, they take loving care of their children, they take admirable care of their husbands. But they are real women with real problems, and they are pioneers who have made a trail for you to follow.

Learn from Your Hero...

Chances are, if you look around at your law school, your law firm, or your community, you will find accomplished, successful, powerful, and loving lawyer-mothers. And most of them will be delighted to share their wisdom with you.  For example, Ruth Kovnat, a Professor Emeritus at School of Law and the mother of four sons, once told me that she and Justice Minzner used to joke about the disheveled condition of their linen closets.  They were successful career women who were deliberately overlooking things that were not important enough to make it on the list.  Despite appearances, they weren't magical beings - they were real, live women who had their priorities in order.

Be a Problem Solver...

The common characteristic of all these pioneering women and mothers is that they never gave up.  Despite encountering a range of difficulties, illnesses, set-backs, and discrimination, they relentlessly kept pursuing their goals.

Take a deliberate look at your life and decide what should stay and what should go.  Some women decide from the outset not to have children.  Some women live close to their extended families to have help with childcare.  Some women can afford a maid.  Some women have husbands who are willing to be the primary caregiver. Some women wake up early and go to bed late. Look around you, learn from the women who have gone before you, and follow their brave trail.  That may mean working through lunch to pick up your kids from school, or forgetting about your linen closet to make time to finish that brief.  Every great lawyer has a set of great problem-solving skills, and that includes being able to contend with the set-backs in your own life.

I would love to hear from Ms. JD readers about the women heroes in your community, as well as how you have solved problems in your life that have arisen from the clash of your personal and professional lives.
Who knows, your story could help someone else find inspiration down the road.