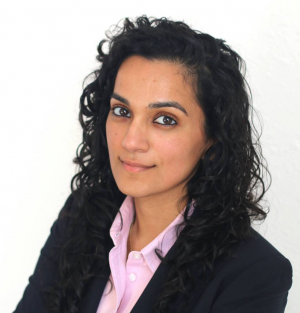 Sonya Passi is a 2012 Ms. JD Fellow and the Founder & CEO of FreeFrom. Sonya received her B.A. and M.Phil from the University of Cambridge (Trinity College). While at Cambridge, she founded the Cambridge Domestic Violence Action Group, which educated college and high school students about issues of domestic violence. Sonya went on to receive a J.D from UC Berkeley School of Law. During her second year of law school, Sonya founded the Family Violence Appellate Project ("FVAP") which, in less than four years, has fundamentally changed the legal landscape in California by providing, for the first time, free appellate legal services to survivors of domestic violence.

Sonya, tell us about FreeFrom?

What motivated you to start your own organization?

I actually started my first organization, the Family Violence Appellate Project (“FVAP”), during my second year of law school at UC Berkeley Law. My domestic violence professor, Nancy Lemon, explained to us that in 50% of cases of documented domestic violence, abusers were winning custody of their children and that, despite California having very strong statutes to prevent this, judges were hesitant to utilize these statutes until they received guidance from the appellate courts. There was next to no appellate domestic violence case law in the state at the time because appeals are incredibly expensive. I went up to Nancy at the end of class and told her we should appeal these cases pro bono. The need seemed so great and the solution so simple. I was just a second year law student at the time … I initially envisioned this being some sort of law school clinic. Within two months, we had filed our 501(c)(3) and incorporated in California as a nonprofit.

Similarly, I started FreeFrom because the need for economic justice and financial security for survivors is so great. When you know that there is a gap and you have an idea to fill the gap and make people’s lives safer, that’s all the motivation you need.

How has your past experiences in law school and otherwise informed you on the issues that FreeFrom addresses?

I chose to go to law school because I wanted to work on domestic violence issues and from day one of torts in my first semester, I saw tort law exclusively through the lens of domestic violence. We have the torts of battery, assault, and intentional infliction of emotional distress. But in cases of domestic violence, there may be many counts of battery, assault, sexual assault, threatening, stalking, strangulation, psychological abuse, and financial abuse. Moreover, the injury is ongoing and cannot be boiled down to isolated incidents. It seemed to me that domestic violence should be its own tort because current tort law does not adequately capture the extent of the harm of domestic violence. I spent many of my torts professor’s office hours talking through the need for a domestic violence tort in each state and the need to include financial abuse as a cause of action under the statute in addition to physical, sexual and emotional abuse. During my second year, I had the opportunity to take domestic violence law with Nancy Lemon and I wrote a paper that went into more depth on these issues. The tort idea took a backseat while I built FVAP. However, so often FVAP’s clients were homeless and/or had not been able to rebuild financially since they left. The need for an organization to support survivors after the immediate crisis was still so pressing and so I turned my attention to building FreeFrom once FVAP took flight.

What are some of the misconceptions that people are not aware of when is comes to Domestic Violence?

When I tell people that the number one reason survivors of domestic violence don’t leave is because they cannot afford to, they often don’t believe me. They assume that most survivors don’t leave because they are emotionally entangled; that they don’t leave because they don’t want to. In fact, survivors are judged by society at every step of the way … how could they fall for an abuser? Why don’t they just leave if it’s really so bad? How could they go back? A lot of what FreeFrom hopes to do is break down these misconceptions and spotlight the underlying financial obstacles – lack of income, lack of employment, poor credit, the cost of uprooting your life – that survivors face. Moreover, we hope to breakdown the myth that survivors are weak and frail. Quite the opposite – to have survived an abusive situation you need to be resilient, determined, and strategic. This is what it really means to be a survivor.

Civil Litigation: FreeFrom acts as a central hub for tort litigation, allowing survivors to hold their abusers financially accountable and receive monetary compensation for the abuse they have suffered. FreeFrom connects survivors with attorneys whom we train and support with a network of expert witnesses, sample briefs and the latest social science research.

Public Policy: On a state level, FreeFrom advocates for the implementation of a tort of domestic violence statute that gives survivors more time to bring their tort suit (currently only 1-2 years in most states) and incorporates fairer evidentiary standards (current tort laws require survivors to provide evidence of each instance of abuse for which they are seeking compensation). On a national level, FreeFrom is pushing to make it easier for survivors to repair damaged credit resulting from financial abuse by their abuser.

Entrepreneurship: FreeFrom helps survivors of domestic violence to start their own small businesses through entrepreneurship education, business planning, legal support, website development and branding, mentorship, childcare and access to seed funding. In return for this support, FreeFrom asks that these small businesses provide employment to other survivors, thus building networks and communities of women supporting women out of abuse.

What have been your biggest challenges in starting FreeFrom and how have you overcome them?

The biggest (and most valuable!) lesson I learned in starting FreeFrom was patience. When I decided to found FVAP, everything came together very quickly. I formed our board in less than two months. We found the perfect executive director right out of the gate. And donations followed very soon after that. We were taking cases 6 months after the idea was conceived. FreeFrom has a much broader mission, vision and scale – it is a national organization with three separate program areas. It has taken small, concrete steps to bring it all together. There are so many more players to engage. And so much more to plan right out of the gate. It’s been an incredible experience but, for sure, it forced me to sit with the discomfort of incremental movements rather than bounding forward like I was used to.

Have you had community support from other non-profits, organization and advocates in the field of Domestic Violence?

Absolutely. From day one. FreeFrom’s model is built on community. All our programs rely on partnerships. For example, we just launched our tort litigation program in California last week and domestic violence organizations across the state are already screening for potential cases and referring clients to us. Our entrepreneurship program is being launched in partnership with the Jenesse Center and Bet Tzedek in LA, La Casa de las Madres in San Francisco and the Alameda Family Justice Center in Oakland. In addition, FreeFrom’s advisory board is a who’s who of domestic violence leaders. I could not have built the organization without them. None of us, especially new organizations, can do this work alone.

What are you most proud of in starting this organization?

I think I’m most proud of the community that we have been able to build around FreeFrom – pro bono attorneys, domestic violence organizations, leaders in the field of domestic violence, volunteers, donors, etc.

What kind of advice would you give other practitioners or law students who are interested in starting their own organization?

When I had the idea for both FVAP and FreeFrom, the first thing I did was make sure that I wasn’t replicating something that already existed. If you have a great idea and someone else is already working on it, see if you can join forces with them. Even if no one else is working on it, ask yourself if a new organization is the right strategy or if developing a program under the umbrella of an existing nonprofit might be more effective. I have lots of friends who took this latter route and have been able to do hugely transformational work. If after all your research, you can honestly say to yourself that there is a gap that needs to be filled and the best way to do it is to start a new organization, then give it everything you’ve got, be ready to spend a lot of your time fundraising, and choose your board of directors wisely.

I understand you were a Ms. JD fellow, can you share with us the importance of being a leader in your community?

From the very beginning, I have been supported by phenomenal female mentors. Nancy Lemon was my domestic violence law professor at UC Berkeley and now is my dear friend and mentor. Joan Meier, the founder of DV LEAP, has been a fierce and loyal advisor since day one. Eve Sheedy, a giant in the LA DV community, has helped me tremendously. Marna Tucker, my Ms. JD mentor, taught me how to network and be magnanimous. I ended up at a party explaining my work to Chief Justice Cantil-Sakauye of the California Supreme Court thanks to her.  I wrote Gloria Steinem a holiday card last year and told her all about FreeFrom. She publicized our work on Facebook in response. These women, these lionesses of the domestic violence movement, are the reason I am able to do the work that I want to do in world. It is important not to shy away from leadership because that is how we keep the movement alive from generation to generation. That is how we get things done.

To learn more about FreeFrom and how you can get involved, contact Sonya Passi (sonya.passi@freefrom.org).

Monica Valenica is 3L law student at the University of San Francisco and a military veteran of the U.S. Air Force. Reach Monica by Email or by LinkedIn.