Giving Away Your Authority When You Smile

By jessie kornberg • December 13, 2010•Sexism, Sexual Harassment, and Other Forms of Discrimination 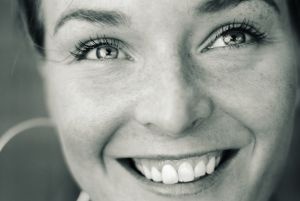 Once before on this site I asked, "Do I have to be serious to be taken seriously?"  The answer is a definitive yes. Last month, the Clayman Institute and the OpEd Project began the eight-week long Silicon Valley Thought Leadership Greenhouse with a lecture from Professor Deborah Gruenfeld of Stanford's business school.

Among other things, Gruenfeld talked about the ways gender norms about body language put women in a double-bind.  On the one hand there is demonstration after demonstration of unintentional bias adversely impacting women's opportunities to assume authority.

Gruenfeld noted that research consistently shows differences in the non-verbal behaviors between those at the top and bottom of social hierarchies.  Those with higher status take up more space through expansive postures like sitting with legs and arms spread apart, smile less and stare directly into another person’s eyes.  Those with lower status take up less space through constrictive postures like crossing one’s legs, smile more, and glance away.

“Women give away power all the time,” Gruenfeld said, “by smiling or looking away when they are saying something authoritative.”

So what's a girl to do? Literally spread her legs? I don't think so. But smile less. I guess that's something to try.

This finding is quite interesting to me.
I have a “high-pitched” voice and I also, apparently, look younger than I actually am. I understand when these attributes put me at a disadvantage (because I appear to look and sound younger than I actually am). However, I also naturally smile while speaking. I never thought smiling would aid in “giving my authority away!”
Great post!

I am smart. And, I am very feminine, into fashion, have long hair, and love to smile. AND I AM PROUD OF IT. It is so sad that as women, we are expected to behave like men for others to perceive us as competent and effective. Yet, when we behave like men, we are perceived as less genuine and self-promoting.  Great post.

I begrudginly have to admit that this study rings true to me (and reminds me of another I read where there were identical speeches, read to one group by a man and to another group by a woman, and the group hearing the speech from the man rated it higher in terms of content, intelligence, etc. than the group hearing the exact same words read by a woman).  I think, though, that the answer has to be to just power through this subconscious bias by proving people wrong again and again until the stereotype becomes meaningless.  The answer can’t, it seems to me, be that women have to learn to be meaner and hide their personalities (though this strategy does seem to be the one that most women employ to get ahead).