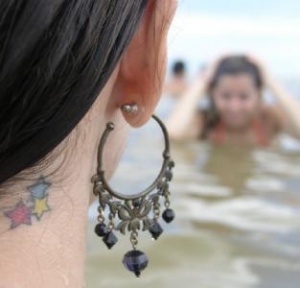 I grew up as the second of three daughters born to "working-class" parents. When I was younger, it was rare to see either of my parents come home from work unexhausted. Growing up, most girls my age weren't expected to contribute the type of chores my sisters and I were; my father had no sons and, as children, we did all we could to help, regardless of gender roles. Consequently, as time went on, I became quite an "atypical" young woman. I was often outspoken in the classroom. When policies or discussions concerning gender, class or ethnicity seemed illogical or unjustified I held minor reservations about communicating my dissatisfactions, despite the common rebuttal that "this was the way things were."

Confronting similar challenges throughout the family context, I confronted both my parents and my sisters about their own roles in the family. My mother had always assumed a more passive role in disciplining and decision-making, and as a young woman, I couldn't understand why this was the case. Had she no opinion? Were her thoughts and experiences no more valid? My father had adapted well to the role of expressing (through words and actions) "the rules" of the house and the importance of working together. But my mother, through her silence, had tried to express to us the value of compassion, understanding and cooperation, even if I could never fully appreciate this at the time. I suppose this instilled in me a sense of respect for the logic behind argument as well as compassion for those without the courage or voice to speak up, because I would often find myself vigilantly confronting my father about this.

In attending law school, I realized immediately that I was embarking on what many claim is a "male-dominated" professional field. The Socratic Method, approaches to problem solving and confrontational rebuttals by classmates--reminding me of past experiences with my father--convinced me that the very approach to the law itself seemed to pave the way for many of the men in the classroom, while leaving most of the women (and other men as well) either intimidated or passively reserved in communicating their own opinions.

As a student of the law, I know I cannot conclude that this approach is faltered, but I do believe that women have an enormous amount to contribute to the legal profession, whether they include those like myself--unafraid to make their voices and opinions heard--or they involve often overlooked approaches to the law including compassion, mediation, cooperation and understanding. I also do not believe that these qualities should be labeled as gender-specific in anyway. The people who decide to pursue a legal career come from a vast array of backgrounds, families and geographical regions, all with many potential alternative contributions to the approach to the law. It seems to me that incorporating these views into the legal field would bring a new definition to what the law means, how the law affects all people in different ways, and why some legal practices--both in and out of the courtroom--may work for some, but not all those who look to the law for justice and resolution.