Hell No: Caster Semenya’s Fight for Bodily Integrity - On the Field: Women in Sports Law

By Tatum Wheeler • May 29, 2019•Ms. JD,  Issues,  Sexism, Sexual Harassment, and Other Forms of Discrimination,  Women and Law in the Media 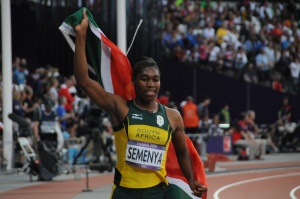 On April 30, the Court of Arbitration for Sport, ruled that the IAAF Eligibility Regulations for Female Classification (Athletes with Differences of Sex Development) (“DSD Regulations”) were valid, and suspended Caster Semenya’s, and her co-party Athletics South Africa (South Africa’s athletics governing body), request for arbitration. This is just the latest development in a years-long inquiry into how athletics organizations define Caster Semenya’s gender and whether and in what type of body she is able to compete in as a female athlete.

The Court of Arbitration for Sport was created in 1984 to provide independent arbitration and mediation for disputes in sport, many arising from the Olympic Games. Parties agree to such arbitration and are expected to comply with its decisions. While decisions from the CAS are binding and final, there is a narrow basis for appeal including incompatibility with public policy.

The DSD Regulations specify that in order to be eligible to compete in the 400 meter, 800 meter, and 1500 meter races, female athletes with XY chromosomes and natural testosterone levels in the male range (7.7 – 29.4 nmol/L as opposed to the female range of <2nmOL/L) who experience a “material androgenizing effect” must reduce their natural testosterone levels to below 5 nmol/L and maintain those levels for six months. To reduce their levels, the report notes that female athletes can use oral contraceptives. The Executive Summary does not define what a “material androgenizing effect” is; however, commentators have provided examples of an increase in lean body mass or an increase in hemoglobin (the red blood cell protein carrying oxygen to the lungs).

The Court of Arbitration for Sport agreed that the DSD Regulations were discriminatory; however, the 2-1 majority found that “discrimination is a necessary, reasonable and proportionate means of achieving the legitimate objective of ensuring fair competition in female athletics in certain events and protecting the ‘protected class’ of female athletes in those events.” Although they stated that the decision was not “easy to decide," the Court noted that:

Put simply, on one hand is the right of every athlete to compete in sport, to have their legal sex and gender identity respected, and to be free from any form of discrimination. On the other hand, is the right of female athletes, who are relevantly biologically disadvantaged visà-vis male athletes, to be able to compete against other female athletes and to achieve the benefits of athletic success. The decision is also constrained by the accepted, necessary, binary division of athletics into male events and female events . . . [which] has not been challenged.

In their longer opinion, they opined that there may be issues regarding the “future practical applications” of the DSD Regulations, notably its implementation, lack of concrete evidence, and potential side effects.

Soon after, United Nations Women published a statement expressing its “strong concern” that CAS’ decision “contravenes the international human rights norms and standards” of the March 2019 United Nations Human Rights Council’s Resolution on the Elimination of Discrimination against Women and Girls in Sport. In its strongest language, the Resolution "[c]alls upon States to . . . refrain from . . . policies and practices that force, coerce or otherwise pressure women and girl athletes into undergoing unnecessary, humiliating and harmful medical procedures . . . and to repeal practices that negate their rights to bodily integrity and autonomy.”

The World Medical Association challenged CAS’ Decision through a statement condemning “. . . any practice requiring physicians to use their competence and skills for any other purpose than providing medical care in the best interest of their patients and in respect of their dignity.”

Athletics South Africa has also suggested that they will proceed with an appeal, and perhaps even United Nations sanctions against the IAAF.

After the ruling, Caster Semenya released her own statement: “I know that the IAAF's regulations have always targeted me specifically. For a decade the IAAF has tried to slow me down, but this has actually made me stronger. The decision of the CAS will not hold me back. I will once again rise above and continue to inspire young women and athletes in South Africa and around the world."

True to her word, just days after the ruling on May 3, Semenya won gold in the IAAF’S opening 800 meter Diamond League race. And when asked if she’d give up her bodily integrity to appease the IAAF? Caster Semenya gave an emphatic “hell no.”

----
Tatum Wheeler is a law student at UC Irvine. When she’s not studying, she spends her free time exploring the coastline, connecting with friends and family, and cheering on her favorite sports teams. Please feel free to contact her with any questions, comments, or further advice.