By Amanda Chan • June 14, 2017•Issues,  Women and Law in the Media,  Features,  First Women,  Superwomen JDs and What You Can Learn From Them While Amal Clooney may dominate headlines for her fashion and much more importantly, her work in human rights and women’s rights, it is important for women lawyers--aspiring or practicing alike--to know about more of the many inspirational women human rights lawyers around the world. They have diverse experiences, and the paths they have taken serve as models for other women lawyers to follow and expand upon.

Fatou Bensouda is the Chief Prosecutor of the International Criminal Court in the Hague. She has been serving as the Prosecutor since 2012. She previously served as a deputy prosecutor in the ICC for eight years, and she worked in the international tribunal in prosecuting genocide in Rwanda. She was also Gambia’s first expert on international maritime law. As Chief Prosecutor, Bensouda inherited many of her predecessor's difficult cases and the ICC’s unpopular reputation. Some, such as the African Union, accuse the ICC of anti-African bias, given that most of the ICC’s investigations are in regions of Africa. In response to the African Union’s calls for African nations to withdraw from the ICC, Bensouda publicly condemned African leaders for allowing genocide to go unprosecuted and commenced investigations in non-African regions, such as Afghanistan and Iraq. Bensouda believes that her experiences as a Gambian woman deeply informed her strategy and will to perform such a demanding and hypervisible job. She has made it explicit that she focuses on war crimes committed against women and children. In 2017, Bensouda was named as one of TIME’s 100 for the second time.

Amal Clooney In the interest of straying away from the current media obsession surrounding Mrs. Clooney’s wardrobe and pregnancy, here is a reminder of her various accomplishments. Clooney is a Visiting Professor of Law at Columbia Law School. One of Clooney’s current projects includes documenting and devising a legal strategy in prosecuting ISIS militants in their persecution of the Yazidi people of Iraq. Clooney represented Yulia Tymoshenko, former Ukrainian Prime Minister, in helping Tymoshenko shorten her prison sentence, bring attention to the abuse in prison, and help Tymoshenko receive desperately-needed specialized medical care. Clooney is an expert of sexual violence in war, having served as a member of UK Foreign Secretary’s Preventing Sexual Violence Initiative. Clooney also successfully represented Cambodia in an international territory dispute against Thailand, rightfully securing legal authority over the Preah Vihear Temple. Her profile here has a more complete list of her cases and achievements.

Shirin Ebadi is an Iranian human rights lawyer and winner of the 2003 Nobel Peace Prize. Before the Iranian Revolution of 1979, Ebadi served as a judge in a Tehran City Court while also finishing her doctorate in law studies. After the Islamic Revolution, the new administration ousted Ebadi as a judge, though after some protest, reinstated her as an “expert” in the court. However, Ebadi refused the demotion and instead retired from the court. She used her newfound spare time to write various books and law articles for Iranian journals, establishing herself as a respected law scholar with in Iran. In 1992, Ebadi received her law license, and she accepted many high profile cases, many of which brought attention to discriminatory laws that denied justice to women and children. Mrs. Ebadi has executed research projects for UNICEF, lectured all around the world, and founded the Human Rights Defence Centre. Ebadi currently lives in exile in the UK and continues her endless work in human rights in Iran. 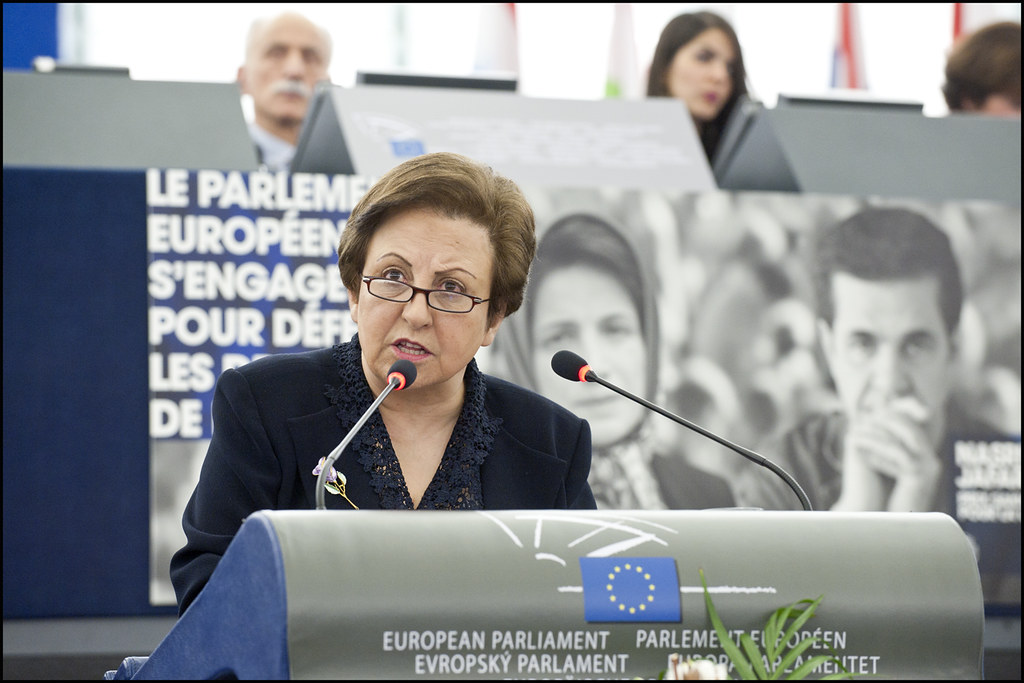 Salwa Bugaighis was a Libyan human rights lawyer based in Benghazi. She was assassinated in 2014, in the aftermath of the 2014 Libyan elections. Many human rights organizations and Bugaighis’ peers believe that she was killed for her work in women’s rights. Before 2014, under the Gaddafi regime, Bugaighis represented many of the Gaddafi administration’s political prisoners. Bugaighis was very active in fomenting the 2011 revolution for a peaceful democracy, and she held a place on the revolutionary movement’s National Transitional Council. She also held Libya’s first conference on women’s rights to ensure that the laws of the new Libya would include and respect the rights of women. After the National Transitional Council, Bugaighis served as deputy head of the National Dialogue Preparatory Commission, which was an organization that aimed to reconcile the various conflicts between different tribes and factions of Libya. Bugaighis was determined to submit her vote in the 2014 elections, even though she knew her life was in danger. Her death shocked the world. The international community will remember Bugaighis as someone who sacrificed everything for the sake of democracy and equality for Libya.

Samantha Power Before Power was a lawyer, she was a journalist; her beat was the Yugoslav Wars. She graduated from Harvard Law School in 1999, but Power first caught international attention for her unapologetically critical book A Problem From Hell: America and the Age of Genocide, which won the Pulitzer Prize for General Non-Fiction in 2003. Power quickly gained a reputation as someone who unflinchingly condemns the United States history of targeting oppressed peoples despite the magnanimous anti-genocide rhetoric that American politicians spout to get themselves re-elected. From 1998 to 2002, Power was the Founding Executive Director of the Carr Center for Human Rights Policy, a program at the Kennedy School at Harvard University. Power joined the State Department under the Obama Administration in 2008 and continued her reputation for focusing on human rights, democracy, and peace. In 2013, the Senate confirmed Power as the UN ambassador of the United States, although Power had to endure many questions about her past comments about the oppressive history of America in the confirmation hearing. She was the youngest UN ambassador in history at the age of 43. While Power must now manage a life of Realpolitik, as opposed to her past in academia, she maintains her focus on peace and human rights intervention, continuing to speak out against US institutions that, she feels, do not take essential action in times of human rights atrocities.

These women are just a sample of the many number of women lawyers around the world who are trailblazers in the fields of women’s rights, humans rights, conflict resolution, and peacemaking. They are role models for many human rights activists and lawyers today who are fighting in a frightening time of corruption, war, and exploitation. A brighter future of equality and peace will come only with hard work, and these women have put in their share.