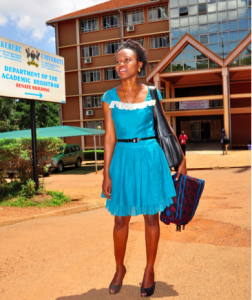 Editor's Note: In 2010 Ms. JD launched its Global Education Fund and awarded its first grant to the Gender Mainstreaming Division at Makerere University in Uganda.  Joaninne was one of two students chosen by the Division to attend the law school under the grant.

I was born in a family of five children. I have two step sisters (both maternal and paternal) who are older than me. I spent most of my childhood in Mbarara District in a place called Rubindi and partly in Nakasongola District. My father was an engineer with the Uganda People’s Defence Forces while my mother was a private business woman. Life was okay until 1st January 2002 when my mother died. We could not stay with my father because he was a drunkard and always traveled a lot. We were, therefore, sent to stay with our paternal aunts in Kyengera, a suburb in Kampale City, Uganda. Our father was supposed to pay our school fees but it was hard to get him. My aunties did not help much so sometimes when we completely failed to trace my father, I would seek help from well- wishers especially at church and they would pay my fees. With this situation I managed to complete my senior four from Mugwanya Summit College in 2005. It was hard because I was require to produce my primary seven pass slip (Leaver’s Certificate), which I did not have because school fees for my primary education had not been completed. It was by God’s grace that I managed to convince the teachers to sit my ordinary level examinations.

After my senior four I joined a cultural troupe which used to perform Music, Dance and Drama. They promised to pay my school fees. All this time, I did not know where my father was and my young siblings were in school but no fees were being paid. When my maternal aunt learned of my joining the troupe, she said I was going to get spoiled so she told me to quit. I resisted telling her that since there people were going to pay my fees, I should stay. She however threatened to take them to courts of law if they did not release me and so I left the troupe. I started living with her in Kawempe suburb and together, we tried to find my father. We traveled several times to Bombo Army Barracks and indeed we found him. We met with his bosses and he wrote a commitment letter saying he would pay our school fees. However that was it. We did not hear from him after that. We then went to FIDA (an NGO advocation for Women’s Rights) to seek help but still failed. My aunt gave up on him and I stayed home for two years without going to school. After sometime, a friend to my aunt offered to sponsor me for the two years and that is how I managed to complete my senior six.

>I did not manage to get government sponsorship at University and yet my sponsor said she could not afford taking me through university. I looked for work and was luckily called back to my former school – Nakasero Senior School – to teach. I hoped to save some money with the help from my aunt and see if could go through university. By this time my father was dead. He died on 28th November 2008 so there was no hope. Luckily enough this scholarship opportunity was advertised and I applied. I prayed so hard to get it and with God’s grace I did. I am so thankful to the Gender Mainstreaming Division of Makerere and Ms. JD for such an opportunity because I was about to lose hope. I cannot thank you enough and I promise not to let you down. Thank you so much.

I’m sure all of your hard work will continue to pay off!

Good luck in your first year, Joaninne! Thank you for sharing your story with us.