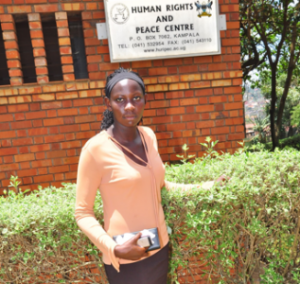 Editor's Note: In 2010 Ms. JD launched its Global Education Fund and awarded its first grant to the Gender Mainstreaming Division at Makerere University in Uganda.  Monica was one of two students chosen by the Division to attend the law school under the grant.

My name is Monica Athieno born to Kuman (tribe) parents from Kaberamido District, Uganda. I was born on the 3rd January 1990 and I grew up in Soroti District where my father was working at the time.

I attended primary education in Soroti Primary School and my father catered for my and my other siblings’ education. I lived a happy childhood until the fateful day, 4th April 2001 when my father passed on. This was a turning point in my life; nevertheless life had to move though with great difficulty. It was unfortunate that none of my paternal relatives came in support my family and my maternal relatives lived amidst challenges at the time so they could not do much.

My mother single-handedly struggled hard, as a market vendor to put food on the table.  Things were very tough when I was going to join secondary school yet I had performed well (11 aggregates Division I). I, however, I managed to join Kangole Girls’ Senior Secondary School in Moroto District. This was a very modest school which my mother could afford.

My little siblings (Jennifer, Martin, Recho and Peter) also studied amidst challenges and some of them had to stay at home for some time due to difficulty to meet school dues. I successfully completed my Ordinary Level education and managed to score 34 aggregates (Division II) which qualified me for Advanced Level (A Level) Education.

In 2007, my world had almost came to an end when it became almost impossible to join A’ level since there wasn’t enough money to raise school fees. However, my mother did not give up and she was able to raise some money and told me I would join A’ level the following year (2008). I could not imagine this but I managed to join one the good girls’ schools (Tororo Girls School) where I sat my A’ level and I passed with 21 points. I told my mother I wanted to do law at University though I did not qualify for a government scholarship. My mother encouraged me to enroll under the private arrangement because although the course was very expensive, she always wanted the best for me and my siblings. During my vacation I worked hand in hand with my mother in order raise money to start me off at University.

With help of my maternal relatives, I was able to enroll for Law degree. They, together with my mother raised enough money for my accommodation and daily up keep and that’s how I found myself doing my dream course with an aim of achieving a better life someday.

From what I experienced since 2001 to date, I learned that when one falls down, you only need to rise up but don’t look back at where you fell. I believe that someday I will make life better for those who seem to have no hope in life. Education is basic for every child because it provides a voice and foresight because during the process one is able to set down their goals in life and work hard towards achieving it. Orphans have been neglected and looked at as out casts just like I faced it but there is hope; single parents and widows need sensitization, guidance and counseling because through this they get encouraged to offer the best they have for their children single-handedly. Orphaned girls have been forced to get married at early ages so as to meet selfish interests of relatives of the deceased parents. Forced marriage is unfair and can never be a solution to orphanage. In Uganda today, girls and women (widows) are faced with challenges from the relatives of a deceased father / husband, they threaten to take the few assets left. If windows had knowledge about where to seek refuge, they would not be abused this way. There is need to sensitize women about their rights.

By studying Law at University I intend to acquire knowledge and skills to enable me advocate for equality and equity for all and uphold the fundamental human rights and so be able to stand up as a voice for the voiceless.

I’m so glad you are able to pursue law school!

Monica, thank you for sharing your story. Good luck in law school!