By Irene Lehne • February 02, 2014•Nonprofits and the Public Interest 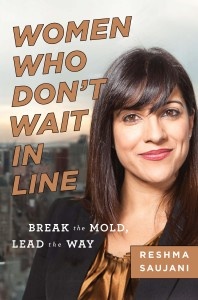 The theme for the 2014 Conference is “Passion Forward.” Do you have any advice for young women who don’t necessarily know right now what they are passionate about?

We have so many options in a world that is so big and so accessible. In so many ways technology has really enabled that. I think women are multi-dimensional, right? It’s like, I want to be a writer, I want to be a singer, I want to be an activist. I think that is also what is so exciting about this new generation of women—that they have the intensity and capacity to live so many different lives. When I think about my own career path I was a litigator, and then a corporate lawyer, and then a candidate, and then an executive director of a non-profit, and then a candidate, and then a writer, and then a CEO and Founder of an organization. I have had so many different careers already in my own life. You don’t have to be on one path but I think you always have to be exposing yourself to different people and different experiences to find what that passion is for you.

I’ve changed my mind a lot, and there is nothing wrong with that. I think people have to be comfortable taking different directions.

You wrote about the need to embrace failure and I was hoping you could share with our readers the value you see in embracing failure when it strikes.

I think that we women in society are often very ashamed of failure–especially as women. Personally, I used to feel like I had to do the job before I applied for the job or promotion. Failure was something I really had to learn to be OK with. When I left my corporate job to run for public office it was like jumping off of a cliff and it was terrifying. Everything I did that year was terrifying and I think those experiences made me stronger. Ultimately, I lost and I was stronger for it. And now, it’s like I’m never really afraid to try anything again and I think that is something we really have to teach women.

As you mentioned it can be difficult to challenge the status quo but having a network of great women can be really useful in those moments. Can you tell us a bit about your “sisterhood” and how powerful it is to surround yourself with women?

It is so valuable to have women supporting women. I think my first 100 twitter followers, and my first 100 Facebook friends, and my first 50 donors were always women. I’ve just had women who were rooting for me and cheering me on. I think the power that we as women have to support and leverage one another is just incredible. For me, that is what the sisterhood represents for women. We are a majority but we have to start acting like it. That means supporting one another, leveraging one another, writing checks for one another, and really advocating for one another in order to build the sisterhood.

Can you explain how sponsorship differs from mentorship?

Mentorship is about giving advice while sponsorship is about helping to elevate someone into a position of leadership. Sponsors not only show you the way but get you there. I always say, we as women need to hire women and promote one another. If I’m leaving a board I want to make sure another woman gets my spot. That is sponsorship. Women have been doing this for one another for decades.

When did you make the connection with STEM (Science, Technology, Engineering, & Math) and young women before ultimately founding your non-profit, Girls Who Code?

It was on the campaign trail where I saw the technology divide up close and personal. I have been very passionate about women’s issues and I saw this huge opportunity and all this job growth in the technology sector—but the majority of the female workforce wasn’t going into them. As someone who went to the Kennedy School and really focuses on economic development, it just didn’t make sense to me. I really wanted to understand the disconnect and that is why I started Girls Who Code. When I started Girls Who Code I didn’t intend on it becoming a movement or for it to be as large as it is now. I just wanted to see what would happen if you put twenty girls in a classroom. It took on a life of its own.

What do you hope to see in the next generation of leadership?

Do you have any last thoughts or general advice for young women as they are entering the legal workforce?

Law schools don’t necessarily do a great job of presenting all of the possible career options. For me, I found myself in a lot of debt and thought “oh, I have to go work at a law firm.” So I think really talking to people in your second and third year about all of the opportunities that are open to you outside of the traditional legal market as you are thinking about what you want to do. At this point I don’t practice law, but I do practice law every day. My legal skills allow me to run a non-profit, has allowed me to run for office, and has influenced the way I problem solve and think about issues. Being a lawyer isn’t just about being in a courtroom or a boardroom. There are many different career paths that are going to be open to you.

Women Who Won’t Wait in Line