Interview with Recent Grad Alexa Galloway - On the Field: Women in Sports Law

By Tatum Wheeler • August 09, 2018•Writers in Residence,  Careers,  Law School,  Internships and Clerkships,  Issues,  Sexism, Sexual Harassment, and Other Forms of Discrimination,  Women and Law in the Media 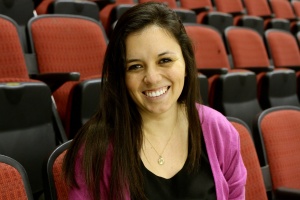 Hey, Alexa! Thanks for joining us. First and foremost, congratulations on finishing law school! What are your short-term and long-term goals?

Alexa: Well, my short, short-term goal is to pass the bar. Following that, I hope to work in civil litigation and get as much trial experience as possible. By attending conferences and speaking with attorneys in the sports industry, I discovered many of them also started out as trial lawyers.

One of my goals as a lawyer is to help promote a more uniform concussion protocol for youth athletes. I spent my fall semester as a 3L working on a research project for my Sports Law class regarding youth, sports-related concussions. With this project, I had the opportunity to follow local high school football and POP Warner teams and witnessed how teams were interacting with their concussion policies in place, which was very eye-opening to see firsthand. I do believe everyone’s heart is in the right place when it comes to sports safety but I think a more uniform approach when handling a player who might have a concussion will prevent any athlete from falling through the cracks. I also strongly believe that tackle football should start in high school, not when the kids are in Pop Warner because a seven-year-old can’t be trusted to understand, or even recognize concussion symptoms. Even though a sixteen-year-old might not be different, most high schools have athletic trainers and trained coaches in place that will be able to stop them from only leaving the field because they’re on a stretcher.

Recognizing no two women’s law school journeys are the same, what was your path to law school like? Why did you choose SCU? What prompted you to get involved in sports law?

Alexa: I went to Boston University with the goal of becoming either a journalist or a lawyer. Initially, I majored in journalism but the directional change came when I was a junior. I had the chance to interview Jon Macks, who was a top writer for the “Tonight Show with Jay Leno” at the time. He gave such a great interview about the relationship between late-night comedy and politics but what resonated with me most was the fact that he went to law school. He joked that it was so he could sign “comma JD” after his name, but the off-the-cuff statement still encouraged me to look into and really understand the value of a JD, even if I ultimately decided not to pursue law.

After attending BU, I knew I wanted to come back to California and go to a smaller school. I was attracted to Santa Clara because of the practical, hands-on courses. Incidentally, I also grew up going to basketball camps there so it was surreal ending up on the same campus as a twenty-two-year-old that I had first visited as a 10-year-old.

I had thought about sports law my 1L year but also wanted to branch out and see what other aspects of the law I was interested in. However, after meeting with career services, I found that my experience in sports journalism would make me a competitive candidate for civil litigation and sports-compliance work and that advice has helped define my career path today.

How has your background in journalism shaped your legal development? How do you recommend those without this background compensate?

Alexa: Journalism and the legal field have many parallels. For example, both often involve long hours, tend to attract competitive people and require strong story-telling ability. One skill that I learned in journalism that is particularly useful to the law is the ability to communicate in a way that everyone can understand, not just professionals.

As a Cape Cod Baseball League field reporter, I’m sure you had to balance providing stats, reading plays, and keeping the audience engaged in your reporting. What skills did you learn from that experience? Have you utilized any of these skills for networking?

Alexa: As a field reporter, I worked for the Falmouth Commodores and working with a single team in the league really helped me understand the value of building professional relationships with the athletes and coaches. Through trial and error, I recognized how important it was to make sure coaches felt that their time was valued and their positions were respected and it was also important to make the athletes feel comfortable during interviews.

For example, one thing I would do before every interview is to research and find something the interviewee and I had in common to discuss with them during any lull time before the camera started to record. It didn’t have to be something particularly profound, but even sharing a favorite TV show or a similar class we’d both taken helped them feel much more at ease, and it would really show in the final product.

One of the skills I gained as a field reporter that I also use when networking is the ability to think quickly on your feet. When I was interviewing a player or a coach, it was “live” so I had to be able to change directions when a question I asked was given an answer I didn’t expect. I think the ability to adapt while in conversation with someone is really important and helps set you apart from other lawyers and law students.

For those unfamiliar, Santa Clara University is a smaller-sized Jesuit school with 5,438 undergraduates and 20 Division I Athletic teams. What challenges do you think smaller schools face concerning sports law representation? How did you address such issues in your role?

Alexa: It’s difficult for me to really identify the challenges the school faces because the athletic department at Santa Clara is incredible, but one of the issues that I think is present at any small school is a lack of adequate funding. At many larger schools, the Compliance offices are staffed with four to five people while Santa Clara has one full-time staff member and two legal interns.

Personally, this benefited my experience as an intern because I was able to focus on a very broad range of tasks. My typical day as a legal intern ranged from researching and writing up NCAA interpretations, communicating with coaches regarding compliance matters and even tackling large projects like creating a handbook for the academic resource center regarding their role in NCAA compliance.

In 2017, through a partnership with the Title IX Office and NASPA, Santa Clara University joined the “Culture of Respect” program which focuses on ending campus sexual violence. Have you noticed a culture shift on campus? What do you think the role of law students is in addressing issues like these?

Alexa: I wouldn’t call it a culture shift, per se, but I think it really opened the door in terms of creating a conversation. The nearby Stanford University case of Brock Turner sparked discussions on campus, and I think helped push the university forward to become proactive, rather than reactive, in developing measures to address any potential issues.

The common refrain is “hindsight is 20/20.” Looking back at your recently finished law school experience, what advice would you give to our Ms. JD readers looking to break into sports law?

Alexa: First, it’s funny because I actually started law school with perfect 20/20 vision, and it’s much less now which was a fun side effect of being a law student that no one told me about.

Though I’m just starting out and don’t feel very qualified to give advice, I think it’s so important to reach out to people. Even though networking is daunting and you don’t want to put anyone in an uncomfortable position, nine times out of ten, people want to help you. For example, all of my internships have been by word of mouth and I would not have gotten them had I not reached out directly to an individual instead of applying through a portal.

Lastly, some of the best advice I’ve been given is that your path does not have to be a straight arrow to get you to where you want to go. Not getting an internship with the SF Giants your 1L summer does not mean you will not be able to work as General Counsel for them one day. Instead, I would really focus your energy in law school on finding what makes you valuable to employers and make it your niche – whether it's your strong writing skills, your ability to communicate effectively with clients or anything else that will make employers want you.

Thanks for your insight, Alexa! And, congratulations again on finishing law school!

----
Tatum Wheeler is a fellow law aspirant based in the San Francisco Bay Area. When she’s not working, she spends her free time exploring new trails with her dogs, reading narratives, and cheering on her favorite sports teams. Please feel free to contact her with any questions, comments, or further advice.