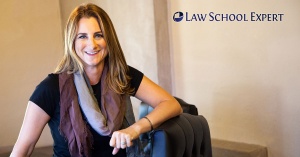 I would like to introduce everyone to Ann Levine. After earning her J.D. in 1999, Ann Levine worked as the Director of Admissions at Loyola and California Western law schools and as a litigation associate. In 2004, she started Law School Expert, a law school admissions consulting firm, and has since counseled thousands of law school applicants as a consultant and through her books, blog, and video tutorials.

Hello, Ann! Thank you so much for taking the time to speak with Ms. JD today. Let's jump in. Moving from the legal field to starting your own consulting firm is quite a leap. What motivated you to make this transition? And what advice would you give to those looking to start their own businesses?

Ann: My move was not one that I had planned. After working as director of student services and as a director of admissions at law schools, I was enjoying practicing law. I liked my clients, was surrounded by bright people, and had some autonomy over decisions since I was at a boutique firm (as opposed to BigLaw where I clerked during law school, and even legal aid, where I'd spent time in clinics and in internships). However, my boss became pretty hostile once I announced that I was pregnant, and I saw the writing on the wall. I started billing hours again when my daughter was 8 days old, and brought her with me to the office thereafter. But I saw cases transfer away from me and I knew I was being edged out. When I was finally informed that my services were no longer necessary, I was ready. I asked for severance. And I applied for unemployment.

The idea for Law School Expert hadn't been brewing - this wasn't a situation where I suddenly felt free to follow my dream. I felt scared. Angry. Jobless. Now living on a single salary with a family of three in a very expensive housing market. I knocked on doors, and called all my contacts. One former client, an attorney, said to me over lunch: "The way to make money in this town is to have your own clients." I ruminated on that one for a few weeks.

How could I get my own clients? I didn't have a huge personal network in our town - I'd only been there for two and a half years. But I had experience in higher ed, in law school admissions, and I legitimately love to help people. I love to write, and I had experience that could be helpful to others. I also had a degree in advertising (which of course was pre-Internet, but still!). I spent a week researching how you start a business- I knew nothing. How do I get a website/a business phone/ a tax ID number? I came up with a budget - I told my husband it would take $1400 to start the business. On our limited budget at the time, he asked if there was a way to do it with $700 and I said no, it was going to be $1400. A month later, I'd made $3000. We never looked back.

Thirteen years later, the advice I would give to someone starting a business is that to be successful you have to hustle every single hour of every single day. You let it go, and someone else steps into your place. A common mistake I see is people trying to pursue too many endeavors at once and they inevitably all fail. The key to success is to focus, to constantly tweak and improve that one thing you're working on. You don't take anything for granted.

Ann: That's a great question! Here are some rules of thumb: If the story ends when you finish high school, it's probably a diversity statement. If it's more about your parents than you, it's probably a diversity statement. If it's about something you didn't do well, wish you'd done better, then it's probably an addendum. Remember that the personal statement should be positive - it should mostly be about the "overcoming" rather than the "obstacle" you overcame if it's about an aspect of your background that would qualify as diversity.

There has been a lot of talk lately about building a personal brand. Should applicants think about themselves in this way when completing their applications?

Ann: No. I think most applicants are too young to have a brand. Law school should be about figuring out who you are. It shouldn't just be a means to an end. Law schools want to know you are sincere, authentic, promising. Gimmicks are unattractive.

Research released last year out of The Ohio State University's Moritz College of Law determined that women who apply to law school are less likely to be admitted, attend law schools with lower ranks, and attend schools that have a lower rate of placing women in jobs that require bar passage. This is just not acceptable. Given your experience, have you found any common themes that can counter these statistics and help women applicants get into and succeed at their dream schools?

Ann: Thanks for sharing this. That was fascinating. It left out one factor - the cost of law school and the amount of loans people take on. Perhaps women are less likely to want to take out loans because they anticipate having some significant time out of the workforce in the ten years after they would be graduating from law school? I think there's something to be said with men being more aggressive about negotiating scholarships, but this would impact where a person chooses to attend rather than where they would be admitted. And it would rarely make the difference between a student attending a Top 50 school versus a school ranked significantly below that mark. I'd love to see an in-depth report on gender bias in the LSAT itself.

If you could correct one common misconception about applying to law school, what would it be?

Ann: That the most important thing is going to the highest ranked law school you can get into.

Finally, working with law school applicants requires a lot of time, energy, and emotional stamina. What is a way that you've found to unwind?

Ann: "Emotional Stamina" - I like that. I would have to say that my thing is travel.  Having an adventure to look forward to goes a long way. Also, finding a new intellectual challenge for myself each year. Last year, I did yoga teacher training. This year I've been studying French in preparation for some time in Paris. (Where I will be working - a benefit of working from wherever "home" is at that moment). I think all professionals struggle with how to step away from work. We are all so connected with each other, and I develop close relationships with my clients so they don't always think before texting me on a Sunday morning : ).

Thank you so much, Ann!

If you want more information about Ann's services and how they can help you personally, please contact her through her Law School Expert form.