It’s February Bar Season. But It Doesn’t Matter If You Pass. No, Really. 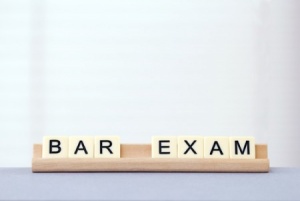 Eighteen years ago this month, I was sitting for the Bar Exam in New York. I was already barred in Pennsylvania and New Jersey, and had been practicing law in New Jersey and Philadelphia for several years, but still, the New York Bar Exam was sitting like a roadblock to my future that February.

Or so I thought.

I had just taken a new position in the Mass Torts Department of Skadden Arps in New York City. One of the Hiring Partners called me in December 1999 to convey the offer to me while I was sitting in my Newark, New Jersey office. After all the niceties of compensation (generous), bonus terms (confusing), and expected starting date (tomorrow!) were conveyed, the Partner stated the obvious. “Of course, you’ll be expected to take – and pass – the New York Bar.”

“Sure, I can plan on taking it over the summer after I get settled into the new position,” I offered.

He ignored me. “You’ll take it this February.” The sudden dread I felt remained unstated. He followed up with: “The Firm will allow you two weeks leave to study. Two full weeks.” The ridiculousness of the offer remained unstated.

I was expected to somehow prepare – in less than 2 months -  for one of the most notoriously challenging Bar exams, while simultaneously taking on a new position at a law firm that was promising me long hours and leisure-less weekends for the foreseeable future. Plus also two full weeks.

I didn’t even take 24 hours to consider the offer. My mind was already made up. I wanted the opportunity and I was up for the challenge. But sitting in the exam room that week in February, I remember thinking that my life would end if I didn’t pass.

Months later, waiting for the Bar results during routine all-nighters and unspoken and yet ridiculously unachievable billable hour requirements, I wondered if maybe my life would end if I did pass.

The truth is: neither was correct.

It is universally accepted that law school attracts creative, hard-working and driven individuals. Similarly, it’s universally understood that law school applicants have – by definition – never practiced law – and thus, cannot fully understand what the practice of law entails. Sitting for the Bar is a prudent decision after you’ve made the investment in law school, and sitting for the Bar as soon as possible after graduation is also prudent, as the Bar exam is not really correlated to anything you will experience in the actual practice of law, and thus it’s best to just get it over with.

But, as it turns out, a JD without a Bar admission is perfectly acceptable in the marketplace – outside of the law firm culture. Which brings me to:

2) I have to practice law because that’s all I’m qualified to do with my law degree. (False. Again.)

When I speak to groups of transitioning attorneys, there comes a point in my talk when I refer to American law schools as the “last legal pyramid scheme with the bottom rungs feeding the elite top.” There’s always a laugh, waning into a chuckle, waning into an aha moment for most in the room.

Let’s face it, there’s some truth in my tongue-in-cheek assertion. And those who don’t aspire to the top rung often find themselves in an uncomfortable position of wondering if there is anything else left for them.

Indeed, when I left the practice of law after thirteen+ years, I learned just how valued and valuable my legal training (including the training I gained in law school) is in the workplace. I’ve used my legal training to work on the executive team for a start-up company, to work in fundraising and development for a private school, to negotiate four publishing contracts (and counting), a literary agency contract, and countless other vendor contracts for various Boards and other professional organizations. That I am a lawyer commands respect in Boardrooms and meetings, and often gives me the floor to advocate for my position, whatever it may be at the time.

The truth is, it turns out, the practice of law is not the only thing I’m qualified to do, law school pyramid scheme messages notwithstanding.

3) I have few other choices BUT to practice law, now that I’ve incurred a substantial amount of debt. (False again. Again.)

Yes, law school is expensive. Incurred debt is on the rise, and it’s easy to view that debt as an albatross that is pulling you under from the moment you graduate. Resist the pull.

If law firm practice is not in the cards for you, but paying down substantial debt is, consider a loan forgiveness program or meet with a financial advisor to discuss ways to reduce your monthly payment obligations. It may be that you have to spread loan payments out over a longer period of time than you originally hoped. Consider that option. Taking on a law firm job SOLELY as a means of QUICK law school debt repayment makes sense only if you are willing to accept the tradeoff and costs of taking on a job you hate. Don't underestimate that cost.

A few resources to consider:  https://www.americanbar.org/groups/legal_education/resources/student_loan_repayment_and_forgiveness.html.

In sum, good luck on the Bar Exam. Sit tight as you wait for results. (If you need something to read to pass the time, I have just the thing!) But no matter the result, I promise you:

Your life will not end.