It’s time to be vocal about our values 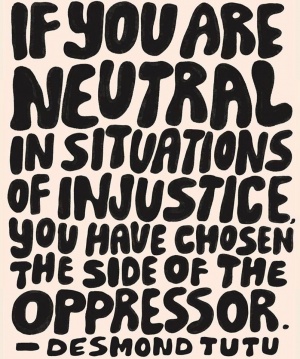 Have you ever engaged in a conversation where things were said that went deeply against your values, yet for some reason or another you chose to stay silent? It happened to the best of us.

You could hear these past weeks many times the Angela Davis quote that “it is not enough to be non-racist, we must be anti-racist”. I have to admit, although I’ve never considered myself racially biased, I haven’t exactly been actively anti-racist either. And I know many of us were educated and informed enough to know that those horrible things were happening to BIPOC people, yet we decided to turn a blind eye and go on living our privileged lives. Now that we are going through this learning process together, there’s no turning back, there is no way to unlearn, the only way out is through. This made me think about several topics that need to be readdressed in the same spirit.

Racism – I’ve spent my childhood in a closed society  where many of us (especially in the remote countryside) could live our whole lives without ever seeing a black person other than on TV. I know, it’s weird. I’ve grown up since, live in a culturally diverse city (although not diverse enough), I’ve been traveling to places where cultural diversity is a given, and also worked in culturally diverse environments. Now I seek it and enjoy it. But I know not everybody does.

Racism in Hungary mostly affects roma people, not in a small degree. The level of this racism indicates that the only reason other racial groups are not affected that much is that they are all relatively low in number. The government propaganda inciting against people of different colour or culture doesn’t help either.

I know several people in my Hungarian circle who still use the n* word to refer to people of colour. When I call them out for doing so it turns out they had no idea it was offensive. In full disclosure, it is a less violent sounding word than the English equivalent, yet it does mean the same, so we should eliminate it from our dictionary.

In all honesty, I haven’t always called out people for making racist-sounding statements , even just distinguishing between people based on race (out of laziness most of the times, perhaps subordination occasionally). But in light of recent events I most definitely want to be on the right side of history and do my part in creating an equal world where I wouldn’t have to refer to BIPOC people as anything but human beings.

LGBTQIA issues – I only learned recently that there was IA added and made an effort to memorize what each of the letters meant. See? Not knowing is OK, but learning is understanding. I’ve known people from the LGBTQIA community forever, so I’ve never thought about them in any other way than human beings just like any of us. But again, I come from a rural community where people have a very different mindset.

Other than outright violent homophobia (and again, shamefully it’s something our government encourages) I’m mostly encountered with the somewhat innocent sounding form of it, where people say they accept it, just don’t want to meet or see or know about any gay people. And they claim not to be homophobes. But they are. Accepting doesn’t equal knowing LGBTQIA people exist, it equals acknowledging they are not any different than you and act accordingly. There’s a lot of work to be done in this front either and I surely can be more vocal about my opinion and experiences.

Bullying and shaming and judging – I know, this is broad. I mean judging someone for their looks, body shape, weight, age, anything other than their performance. I mostly mean doing it publicly, but I seriously can’t see why it would be any less rude to do it in a private conversation (perhaps less harmful, but not any less rude). And doing it against people of public interest doesn’t let you off the hook either. I don’t buy the argument that they signed up for it, because they didn’t. The fact that someone has a talent in something and decides to make a living out of it doesn’t entitle me to be an a§§hole. My behavior is my responsibility and frankly, I can’t think of anything really that would entitle me to make rude comments about another human being. Maybe if they were rude first, but that’s another story.

This one I can’t say I’m not guilty of, although I limit such comments to things one can help, like fashion choices, hairstyle, make-up, this kind of stuff and never the things you live with (like weight, age, etc.). Neither is nice, I know, because how someone looks is no-one else’s business but theirs. I try to do better. I think the “treat others the way you want to be treated” principle is a good rule of thumb here. Practice a little empathy (it will do you good in each of the mentioned cases) and if you would consider it rude if it was said about you, then don’t say it about someone else. Even when they can’t hear it.

I hope to hear about your experiences  in the comments below (or via LinkedIn or Twitter if that’s your thing).