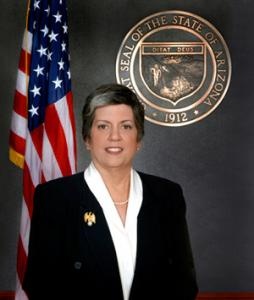 Napolitano received her Juris Doctor from the University of Virginia School of Law. After law school she clerked for Judge Mary M. Schroeder of the United States Court of Appeals for the Ninth Circuit, and then joined Schroeder's former law firm, Lewis and Roca, where she became partner in 1989.

Napolitano, a native of New York, rose to national prominence in 1991 when she was an attorney to Anita Hill, whose allegations of sexual harassment nearly derailed the Senate confirmation of Supreme Court judge Clarence Thomas.

Two years later, president Bill Clinton appointed Napolitano a federal attorney and she was elected Arizona's first female attorney-general in 1998, 15 years after first moving to the state to practise law.

According to USA Today, Napolitano was "endorsed for the Homeland Security post by McCain. 'I hope she is quickly confirmed,' he said last month."

I think Janet Napolitano is great, but as the NY Times pointed out today, she was one of a few Arizona politicians who has effectively stood up to rabid anti-immigrant lawmakers, officials, and groups.  She will be replaced by a Republican who may well allow these individuals to continue efforts to strip immigrants of basic human rights.  Bitter with the sweet…
The article is at http://www.nytimes.com/2008/12/08/opinion/08mon2.html?scp=2&sq=Napolitano&st=cse.