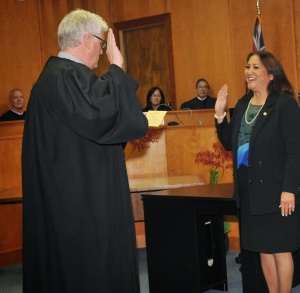 Judge Margaret Kuroda Masunaga: Surrounded by her friends and family, Judge Margaret Masunaga was sworn in on December 2, 2014 as Third Circuit District Court judge by Hawaii Supreme Court Chief Justice Mark Recktenwald. Judge Masunaga’s swearing in ceremony was filled with leis for her guests, the support of her brother and sisters who flew in from California, and was followed by a reception with her favorite foods including sushi and Manago Hotel pork chops.

Among all the excitement, Judge Masunaga’s most memorable moment was a speech given by a representative from the Hawaii Judicial Selection Commission, Dr. Jackie Young. Dr. Young’s speech brought tears to Judge Masunaga’s eyes as she listened to Dr. Young retell her parent’s story that is so near to her heart:

During World War II, Judge Masunaga’s mother was sent to the internment camp in Jerome, Arkansas, where she graduated high school behind barbed wire. Her father was sent to Poston, Arizona and later to Tulelake, CA. They never committed any crime and were deprived of due process of law. From an early age, Judge Masunaga developed a passion for justice and equality which stemmed from the injustice and discrimination that her parent’s endured. She will never forget this, and it is her hope that she can play a role in the justice system so that U.S. citizens will never be treated like this again by the U.S. government.

Now I had the pleasure of interviewing Judge Masunaga for Ms. JD and hope that you will find her advice as helpful as it was to me.

Judge Masunaga is the perfect example of a strong, motivated woman who overcame obstacles to achieve her goals. She wanted to be a judge for a very long time and continued to persevere until she made her dream a reality. After her sixth time applying for a judgeship since 1994 (she was a finalist four times), she received the good news through a phone call from Chief Justice Recktenwald while she was a passenger in a truck driven by her friend returning from lunch. All she could say in response to her judicial selection was “you picked me?” The rest is history.

Transitioning from a Deputy Corporation Counsel for Hawaii County to a judge for the Third Circuit District Court has been an adjustment. When Judge Masunaga was Deputy Corporation Counsel, her schedule was more flexible. She had the ability to go to lunch with friends and create her own schedule. Now that she is a judge, she has a very structured schedule starting at 8:30 am and going until 4:30 p.m. with a short break for lunch in between. She stated that since her judgeship, she has eaten a lot more yogurt for lunch which she keeps in her chambers refrigerator.

Judge Masunaga has met this new challenge head on, effectively managing 185 cases one Monday recently. When asked how she manages her time, she stated that it’s a balancing act between being an active listener while also getting through the cases in an efficient and timely manner.

Since being selected, Judge Masunaga has no problem making a decision. “Just keep your cool, make a decision and move on.”  She said she has to make decisions when they are fresh in her mind so she typically doesn’t take things under advisement.

Advice for Women Aspiring to be Attorneys

Judge Masunaga highlights the importance of mentorships. She stated that mentors were essential to her growth as a lawyer and helped build her confidence to aspire towards her goals. She also stressed the importance of “women helping women.” Especially in the legal arena, surrounding yourself with uplifting, positive women will provide a support group to you through the highs and the lows. Judge Masunaga referred to these women as her “sisterhood friends.”

Mentoring young women will empower them to continue to strive for success in the next generation. As the newest District Court judge in Hawaii, Judge Masunaga hopes to be a positive role model to her 12-year-old daughter Jana, who as a 7th grader at Konawaena Middle School, is the next generation of women leaders.

Judge Masunaga believes that students aspiring to be public servants must have passion within them to serve the people. It took sacrifice to become a government lawyer, but she has never regretted it. There is more to life than money and the satisfaction she feels from being a public servant is invaluable. The most important thing to remember while being a public servant is to talk to everybody, listen, and use your na'auao—which is a Hawaiian word for making a decision with your brain and your heart, or put another way, an enlightened heart.

The Third Circuit of Hawaii is in good hands with Judge Masunaga on the bench using her leadership experience, strong ethics, and  na'auao.

Women lawyers who have mentored me and helped me throughout my career since becoming an attorney in 1987 include Darolyn Lendio, who encouraged me to go to my first ABA Young Lawyers Division "Affiliate Outreach Project" conference in Oct. 1991.  That's where I met Juanita Hernandez, a Harvard educated "inner circle" friend who now also mentors my 23 yr old daughter Colette.  Juanita is a SEC attorney in DC.  She helped Colette when "Coco" was a 16 yr old US Senate Page for Sen. Dan Inouye, when she was a White House Intern, and now as a Congressional staffer.

Family is very important to me.  At my investiture, my siblings Sharon Yamamoto, Diane Muranaka, Donna Kunisaki, and Robert Kuroda, as well as my attorney niece Kristy Marino  & her husband Rick & sons Owen & Alex, traveled from California (as well as Grace Marino from Virginia).  My husband Gail and his sister & brother, niece, Uncle & Aunt are also an important part of my life.

Finally, the persons who have faith in my capabilities are former Congresswoman Colleen Hanabusa, US Senator Mazie Hirono, Hawaii County Mayor Billy Kenoi and Prosecutor Mitch Roth, and the person who selected me, Hawaii Supreme Court Chief Justice Mark Recktenwald!

The Hawaii County Managing Director Wally Lau taught me so much about Hawaiian culture and values, just like my parents, Lillian and Shig Kuroda (who passed away in March & Nov. 2004, respectively) instilled in me certain values.  My life experiences flow from what my parents taught me and have a big impact on how I live.